First heard of Calm Palm Vapor through QRO fav Panda Riot. The Chicago-based 2 piece was on a bill that QRO & Cream Team were cohosting back in 2010.... 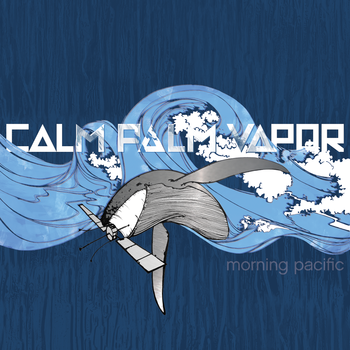 First heard of Calm Palm Vapor through QRO fav Panda Riot. The Chicago-based 2 piece was on a bill that QRO & Cream Team were cohosting back in 2010. Great lineup: Secret Colours, Panda Riot, Calm Palm Vapor, and out-of-towners Chatham Rise. I was pretty excited – any event where I can pull out the disco ball and fog machine is time well spent. Long story short, though, the original venue fell through and the entire shebang got relocated to Panda Riot’s loft. So much for pre-planning.

Happily, everyone rolled with the new venue and the party came off. Calm Palm Vapor premiered a new video, and everyone got to hear new material off the new album Morning Pacific (free download as of now…). Calm Palm Vapor has a killer pop instinct: you could throw this pair into a MMA octogon with a rusty razorblade and a can of Pringles, and they’d emerge with 3 verses, 2 bloody knuckles, 1 chorus, and a smile on their faces.

I’ve included the song "Galaxy Con Glass" below. It’s a little bit of an outlier on the album: shorter, spunker, a kind of groovy Japandroids feel. Calm Palm Vapor do the slow form pop ballad well, but sometimes you have the need for speed.

Chainsaw chord progressions & bleeps & bloops & tremolo abound. Go get your fill at their free show in the middle of February. It has a few of the great acts from the Cream Team/QRO show last year, so if you didn’t catch that, hit this one at one of my favorite spots in Chicago, the Empty Bottle. Oh, and here’s the Twitter if you want to virtually hi-five them. Enjoy!