Coma Girls recently released two singles to their relatively new fame, and somewhat muted allaud, however, they are both finally out, as of December 2019, with EP Smoking Gun... 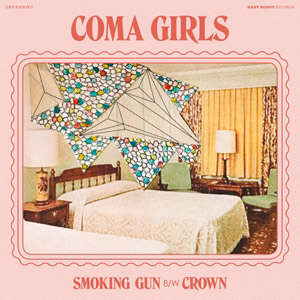 Coma Girls recently released two singles to their relatively new fame, and somewhat muted allaud, however, they are both finally out, as of December 2019, with EP Smoking Gun B/W Crown on the way, following a self-titled 2015 album, which pops and beach-jangles so well, the continuation on these singles is only positive, referenced in the release title, said numbers, are really eclectic rock anomalies.

In a world full of indie bands trying to be cool, Coma Girls manage to be both cool, and different, while somehow maintaining many of the musical norms of modern indie guitar music. “Crown” (QRO review) as a single came out first, and was really fun and jangley, fitting right into the familiar sarcastic indie realm, but actually being fun and jangely as well.

While “Smoking Gun” is more of the same, it stands out instrumentally from the rhythm heavy sharpness of “Crown”, all while building on the jilted alternative sound already mentioned, which is great and exactly the kind of music the indie scene needs. The psychedelic chorus drawls “two big brown eyes and a smoking gun”, and the overall guitar vibe is 14 Iced Bears or Lemonheads like. This is in no way to praise it as perfect, but it fits the mold of both ‘needed’ and ‘indie-alternative,’ which is what makes it eclectic, as most bands are far from the alternative they strive for.

Bottom line, good for Coma Girls for fitting into the L.A. scene while also being different.