No one in the world has had a musical career like Mike Watt.  The bassist founded one of the most important punk bands of the eighties, the legendary Minutemen,... 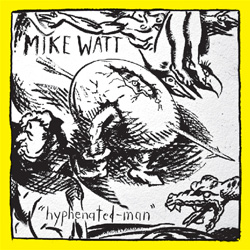 No one in the world has had a musical career like Mike Watt.  The bassist founded one of the most important punk bands of the eighties, the legendary Minutemen, along with guitarist D. Boon & drummer George Hurley – only for the sixty seconds to be cut short when Boon was tragically killed in an automobile accident in 1985.  Watt was brought back to music with the help of Sonic Youth and, along with Hurley and Minutmen fan Ed ‘from Ohio’ Crawford, formed fIREHOSE.

Watt’s solo debut Ball-Hog or Tugboat? in 1995 featured a murder’s row of guest stars (and the touring band had Eddie Vedder & Dave Grohl), and later worked with Nels Cline of Wilco, something that has kept up with to today (QRO photos of Cline & Watt).  An illness felled him in 2000, but he returned, first working with Dinosaur Jr.’s J Mascis on his first solo release, then in the reunited Stooges (QRO photos).  Oh, and he played bass on My December, the third release from original American Idol Kelly Clarkson…

In his solo work, Watt has explored everything from the punk rock song cycle in 1997’s Contemplating the Engine Room to thirty short songs inspired by the paintings of Hieronymus Bosch, in the just-released Hyphenated-man, which begins with "arrow-pierced-egg-man", which harkens back to "Nature Without Man" from Minutemen’s seminal double-LP, Double Nickels On the Dime.

Stream "arrow-pierced-egg-man" below, and check out Watt and his Missing Men on the rest of their North American tour at the dates below.