Music releases towards the end of December and the beginning of the New Year have a way of disappearing into the insatiable void of withering attention spans when the... 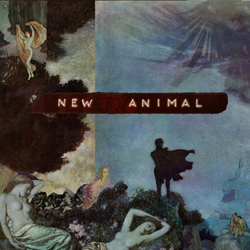 Music releases towards the end of December and the beginning of the New Year have a way of disappearing into the insatiable void of withering attention spans when the end of the year rolls aroud, and music junkies start to compile "Best Of…" lists (witness the underrepresented Teen Dream by Beach House, which most flavor-of-the-month blogs had left in the rearview mirror, only to be given its proper due by…Time Magazine?) with their minds on what they hope will be great in 2011 instead of what was actually great in 2010.

But enough of that. If there’s any justice in the world, we’ll all remember New Animal when list-making time starts. The psychopop duo from Atlanta, Georgia have delivered a precocious gem in their self-titled debut. At least I think it’s a debut, correct me if I’m wrong. Obviously not their first rodeo. The songs are too well-crafted, too well-recorded for this to be a strictly newb effort. Go ask Ohm Park if he knows more – I’m sure he does!

I’m really digging the Samples-esque sparklepop, with postchillwave vibes, and the kind of dedicated, intricate beat work that has become essential for any lo-fi band looking to make a name for itself over and above the "garage" label. At a solid 80 minutes (15 songs) there’s probably more material here than New Animal needed to present at one time, but that’s how they wanted it, and it makes an impressive impact. A few of these songs will find their way directly onto your best mixtapes – the rest are just damn good.

You used to be able to download the album for free at the Bandcamp. Not sure what the deal is now, but you can go there to find other listening options, like Soundcloud; watch some vids on Youtube; and say hi on Twitter. Enjoy!

Stream the track "All I Want Is Gone"