<img src="https://www.qromag.com/wp-content/uploads/2011/04/mumfordandsonsapr13.jpg" alt="Mumford & Sons : Live" />It was great to get a chance to see the big-and-getting-bigger Mumford & Sons at the intimate PC Richard and Son... 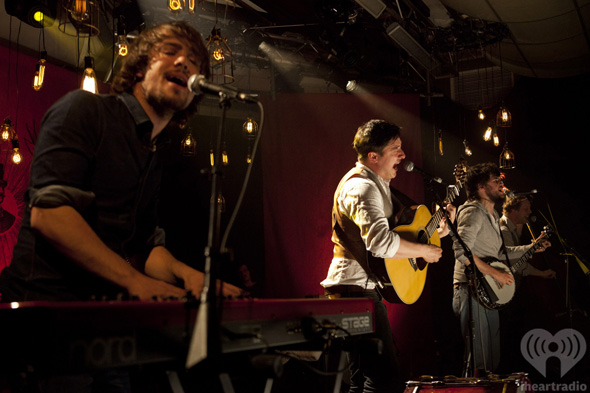 Remember when you liked The Dave Matthews Band?  There was that period, likely in college, and/or when Crash was out, that you got into the South African’s sound, a mix of jam, country, folk, and more.  Eventually Mr. Matthews’ über-popularity and über-jam got to be too much, and you moved on to other, better music – but never could quite out-and-out ‘reject’ the artist.  There are definite hints of Matthews in London’s Mumford & Sons, but without all the jam (or the out-of-place violins & saxophones), just a modern Americana style for today, one that’s not dripping in backwoods twang authenticity, or, god forbid, ‘new country’.  Though the band is getting big, and that’s why it was great to get a chance to see them at the intimate PC Richard and Son Theater (QRO venue review) on Wednesday, April 13th for iheartradio.com.

There is a definite earnestness to Mumford & Sons, but live they nicely compliment that by being engaging and funny – with British accents to boot.  The crowd was quiet and respectful during choral opener "Sigh No More" 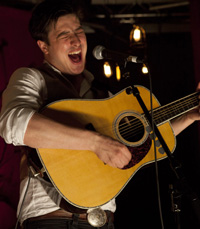 (also the opener to the debut album of the same name), then livened up a bit during the following "Awake My Soul", but it was before "Roll Away Your Stone" that Mumford & Sons really joked with the crowd, as singer/guitarist Marcus Mumford told the crowd that, when they’d soundchecked that song earlier, banjoist Winston Marshall segued into "Man! I Feel Like a Woman" by Shania Twain – and if he did that this time, Mumford would just stop the song dead.  Marshall said that now he had to go into "Woman", but Mumford bartered him down to a few chords of Shania while they were joking.

But you can’t keep Shania down, and she came back near the end of the set.  Right as Mumford & Sons were launching into the great building beginning to their final song, "Little Lion Man", Mumford broke a string.  He said how they just had to stop (since the whole thing was being recorded for iheartradio), and it wasn’t clear whether they’d even do the song at all.  Then Marshall jumped right into his thoughts on "Man! I Feel Like a Woman", and how it states that the best thing about being a woman is their prerogative to, "Have a little fun" (and how, as a man, Marshall doesn’t have that right…).  Eventually Mumford got a new guitar, and the band closed out strong. 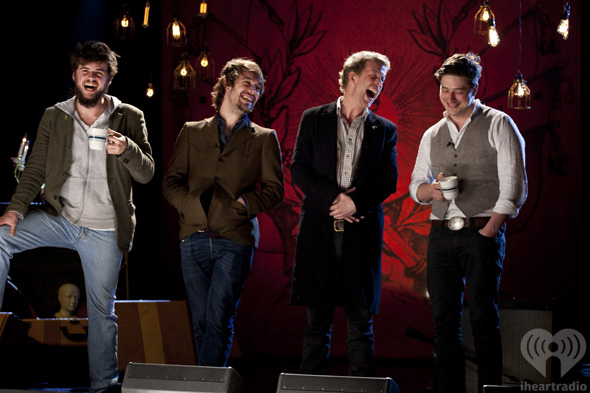 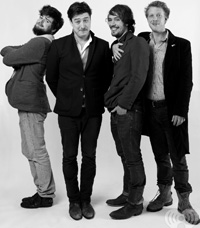 The set was almost entirely from Sigh No More, which is their only full-length (didn’t fulfill shouted requests for "Wagon Wheel" or "Freebird"…), but did include one new number, "Lovers Eyes", a stripped piece akin to "Sigh".  There’s going to be a lot of pressure on that new record, with specters of ‘sophomore slump’ haunting it, and after playing with Bob-freakin’-Dylan at the Grammys, where is there to go but down?  But here’s hoping that Mumford & Sons stick to what they did so well on Sigh and at PC Richard and Son Theater, and don’t get too big or too much (like another musical M & co…).