The COVID-19 pandemic may have stopped Atlanta’s 2020 Music Midtown, but Music Midtown pushed through in 2021, and may have been one of the best yet.... 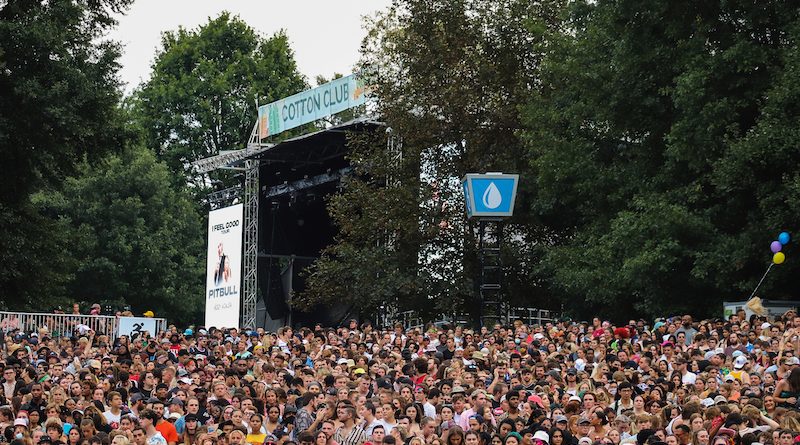 The COVID-19 pandemic may have stopped Atlanta’s 2020 Music Midtown, but Music Midtown pushed through in 2021, and may have been one of the best yet. With legendary artists headlining such as Miley Cyrus and Maroon 5, there’s no question that this year’s Music Midtown was simply iconic.

Music Midtown’s 2021 line-up was probably one of the best festival line-ups of the year. With artists such as Jonas Brothers, AJR, Jack Harlow, Megan Thee Stallion, Machine Gun Kelly, YUNGBLUD, Bleachers, and 24kGoldn, many other festival line-ups simply could not compare. Most of the biggest artists of 2021 were all in Atlanta on the weekend of September 18th at Piedmont Park.

Acts such as Teddy Swims, Girl in Red and Ashnikko kicked off the weekend for us. Country artist Teddy Swims brought amazing energy and set the stage for how the weekend was going to go, euphoric and blissful. Many in attendance then made their way over to the main stage in preparation for Girl in Red’s set, which drew out a very good sized crowd for how early in the day it was. The crowd sang every word back to Marie Ringheim, who goes by stage name girl in red, as she played a mix of songs from her recently released album if i could make it go quiet and previously released singles. There were swarms of people in girl in red merchandise, which was not surprising since it was one of her first shows back in the United States since the COVID-19 pandemic.

We then saw sets from acts such as Ashnikko, Eric Nam, and Dashboard Confessional. All of which are very diverse artists, but the collective euphoria of live music brought together people from all walks of life to form crowds for each set.

Saturday only got better from there, as we saw sets from Lauv, AJR, Machine Gun Kelly, 21 Savage, and Jonas Brothers all before Maroon 5 even came on. AJR brought their A-game to Atlanta that weekend, drawing out a huge crowd, majority of which recited every word back to the three brothers as they sang songs from their recent album OK ORCHESTRA alongside a mix of songs from their previous records, Neotheater and The Click.

Performing a variety of hits from ~how i’m feeling~ and singles, Lauv also drew out a huge and energetic crowd. Although it started raining towards the beginning of his set and didn’t seem to slow down, the crowd didn’t seem to mind. With people on other people’s shoulders and the majority of the crowd reciting every word, Lauv’s set was definitely a success among attendees.

Machine Gun Kelly took the same stage about half an hour later, and the crowd showed that they were only warming up with Lauv’s set. Entering the stage on a giant pill bottle with a hot pink guitar, MGK definitely brought the energy to Atlanta’s Piedmont Park on Saturday. By playing hits such as “Bloody Valentine”, “I Think I’m OKAY”, and “My Ex’s Best Friend”, MGK’s set drew out a huge crowd of people singing every word back to the Cleveland raised artist.

After MGK’s set, the crowds quickly relocated stages to see the Jonas Brothers, who did not disappoint. Although there were so many different people from all different walks of life in the crowd, that didn’t stop every single person in the crowd from having an amazing time at the Jonas Brothers’ set. As the three brothers from New Jersey took the stage, you could feel the roar from the crowd arise. They played a variety of songs from all throughout their career, including “Sucker”, “Remember This”, and “Cool”. They even threw it back to their beginning as a band, with songs such as “Lovebug”, “S.O.S”, and “Year 3000”, which the crowd seemed to love, based on the large amount of screams that erupted.

Finally, everyone made their way back over to the main stage for Maroon 5’s headlining performance, which was worth every bit of anticipation felt by the crowd. Beginning the set with the hit “Moves Like Jagger”, the crowd quickly matched Adam Levine’s high energy, which only got higher throughout the rest of the set. The band performed a good mix of both old and new songs, with everything from recent release “Beautiful Mistakes” to 2002 hits “This Love” and “She Will Be Loved”. Everyone who stuck around for Maroon 5’s late set surely did not regret it.

Day Two in Piedmont Park began with sets from artists such as Sophia Messa, KEY!, and Remi Wolf. Merchandise lines were crazy long, as everyone waited to get a shirt from their favorite artist or festival merchandise to commemorate the iconic weekend in Atlanta. The lines for food and beverages were also insanely long, since the festival had such a wide variety of interesting food and drink mixtures to choose from. There was much more rain on Day Two of the festival, but that didn’t stop fans from bringing ponchos and still having an amazing time.

Soon enough it was time for people to start making their way back over to stages for more performances! Early on in the day, Tate McRae gave an amazing performance that the crowd couldn’t help but dance to. With performances of songs such as “that way” and “you broke me first”, Tate McRae surely did not disappoint.

The day was only getting started there, as we soon made our way over to various stages to see performances from 24kGoldn and Bleachers. 24kGoldn brought the heat to Atlanta, fans had been waiting by the stage since doors opened to see his set, and they did not seem to regret it in the slightest.

Bleachers also brought their A-game, with performances of hit songs such as “I Wanna Get Better” and “Rollercoaster” that audience members couldn’t help but dance to. It was very obvious how happy lead singer Jack Antonoff was for the return of live music. Towards the end of their set, he even asked the audience to get on each other’s shoulders as they performed “Don’t Take The Money”. To which the audience of course complied, getting on each other’s shoulders and having an amazing time for the remainder of the set.

Up next we made our way over to Latto’s set, which was very high energy and the audience surely brought the heat for this one. The singer even brought out 2 Chainz as a special guest halfway through her set, causing the crowd to erupt in screams.

Soon enough it was time for Megan Thee Stallion, who may have been one of the best sets of the weekend. Almost everyone in attendance at the festival was at this stage for her set, with no regrets of doing so. With the performance of massive hits such as “WAP” and “Thot Shit”, Megan surely did not disappoint.

With a massive blow-up red rubber duck wearing a spiked choker on stage, it was already obvious how amazing YUNGBLUD’s set was going to be. Coming out on stage with his half-red hair and leather skirt, Dominic Harrison, the artist known by stage name YUNGBLUD put on an amazing set for one of his first shows back in the United States since the start of the pandemic. He even gave a chilling performance of his song “Mars”, where fans were pictured on the screen crying and holding each other, as it is such a special and meaningful song for his fanbase.

It seemed as though almost everyone in attendance made their way over to the stage for Jack Harlow’s set next. The crowd was so jam-packed for his set that it was almost impossible to even get to the photo pit. Once the Kentucky-native entered the stage, there was an array of uproars from the crowd. The “What’s Poppin’” singer gave an iconic performance in Piedmont Park, with the crowd singing almost every word back to him and jumping up and down non-stop. After performing his smash hit “Industry Baby”, he stated that it may have been the best live performance of that song yet, and that he was going to tell Lil Nas X about it. Definitely an iconic moment and performance for the Louisville rapper.

marshmello’s start got delayed due to technical difficulties, but when he did come on, he did not disappoint. The production was amazing, with strobe lights and lasers going all throughout Piedmont Park. With a great mashup of tons of hit songs, marshmello had everyone at his stage dancing and jumping throughout the whole set.

To close out the weekend, Miley Cyrus was an amazing choice. The Tennessee singer opened with smash hit “We Can’t Stop” and proceeded to go into other hits such as “Plastic Hearts” and “Wrecking Ball”. She even performed the iconic song “The Climb” from her early Hannah Montana days, which was chilling. With everyone holding up their flashlights and reciting back the inspiring words to the singer, it was truly an amazing moment. Cyrus finished out her set with the legendary “Party in the USA”, which had everyone in the crowd dancing and up off their feet.

Overall, 2021’s Music Midtown was nothing short of a success, and we are thrilled to see what next year has in store!