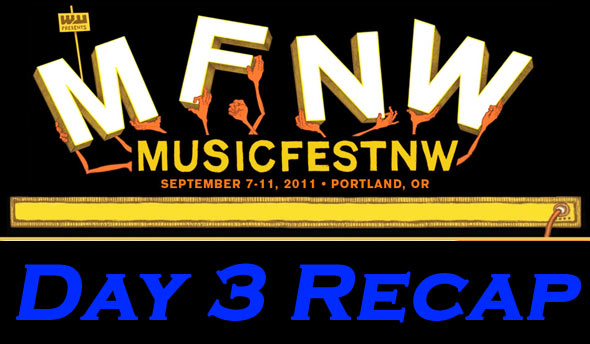 Click here for photos of Marketa Irglova in The Swell Season at Prospect Park Bandshell in Brooklyn, NY on July 31st, 2010 in the QRO Concert Photo Gallery

Day 3 of Music Fest NW means Day 1 of Pioneer Square showcases, where you were in the middle of Portland’s energetic downtown.  I was consumed by sunshine, traffic lights, and on that dusk filled Friday, the sounds of 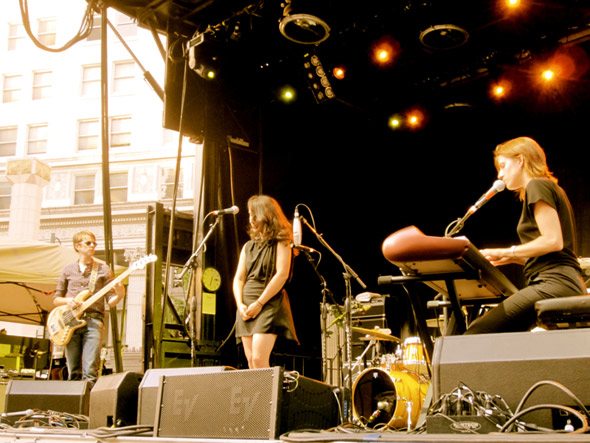 Marketa Irglova and Iron & Wine.  As I exited my cab and headed into Pioneer Square, I could hear the Academy Award winner, Marketa Iriglova‘s enchanting voice calling throughout the building-surrounded amphitheater.  Irglova played the piano like an angel summoned down to spread her message of love and insight.  One comment that struck a light bulb in my head was when Irglova stopped in between songs saying, “If we could learn to love, look, and rely on life the way we do on individual relationships, then we will see the true beauty life has to offer.”  That comment summed up the beauty of her music.  Irglova’s sound was whimsical, at times dreamy and entrapping. 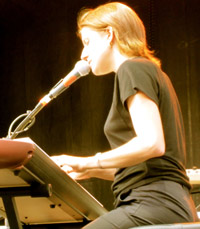 Click here for photos of Iron & Wine at 2011 Latititude Festival in Southwold, U.K. in the QRO Concert Photo Gallery

Click here for photos of Iron & Wine at Millennium Park in Chicago, IL on June 6th, 2011 in the QRO Concert Photo Gallery

Click here for photos of Iron & Wine at Roundhouse in London, U.K. on March 8th, 2011 in the QRO Concert Photo Gallery

This was my second time seeing Iron & Wine, but the first time I found myself fully engrossed by the plethora of audio that was transmitted from the speakers.  Iron and Wine’s latest album Kiss Each Other Clean (QRO review) took a whole new direction compared to any other of Sam Beam’s releases, bringing you on a journey of big blues band meets jam band.  Although the new horn-blaring, trumpet-infested sound is more about the instruments than lyrics, as opposed to Beam’s earlier tracks, he still held the life force to the music that was being created.  Pioneer Place’s amphitheater was fully packed as day turned into night, and each audience member was completely mesmerized and respectful to Beam’s sound.  Not only did Iron & Wine play new tracks, but they also indulged fans with classics such as “Fever Dream”, adding a jazz-like quality to the warm lullaby.  After the hour-long set my ears were buzzing with satisfaction and I was ready to hit the next show. 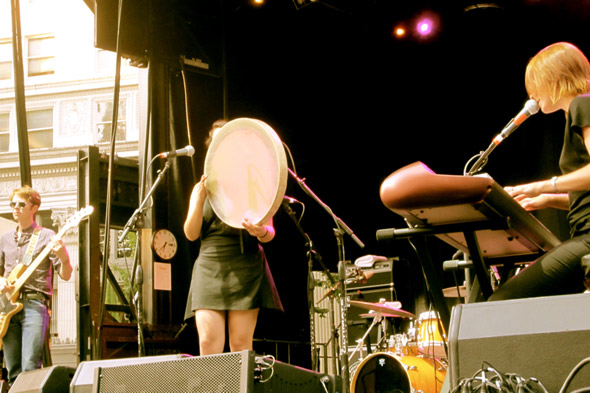 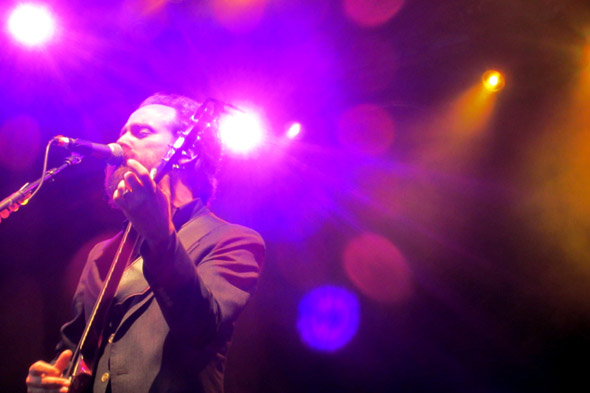 I had a ten-block walk over to Dante’s to check out Portland’s very own psych-soothing Hawkeye.  When I entered Dante’s dim-lit and nearly empty venue Hawkeye hadn’t started playing.  With time to kill I grabbed a slice of Dante’s famous pizza and listened to sound check.  The first thing you may ask yourself when seeing Hawkeye enter the stage is, “How do they fit up there?”  With six members, including a tambourine player, they filled Dante’s stage, tangled between the chords that kept their instruments and sound fueled.  Hawkeye’s sound is that of light, airy, psychedelic sunshine sprinkling down upon you.  A classic of theirs, “Sylvia”, sprung on and I found myself alone on the dance floor bobbing and swaying.  At times Hawkeye brought you back to the glory days of Brian Jonestown Massacre, fueling playful lo-fi tones and encouraging psychedelic stimulation.

Click here for photos of Thee Oh Sees at Grand Central in Miami, FL on February 24th, 2011 in the QRO Concert Photo Gallery

After Hawkeye, I headed straight for the Star Theatre, which was only a short walk to catch the last band on my list, Thee Oh Sees .  Hailing from San Francisco, California, Thee Oh Sees are a psychedelic mania of garage-rock.  That night the Stare Theatre was packed wall to wall and when Thee Oh Sees began there first song it brought a whirlwind of energy into the room, an almost panicked frenzy.  At points in the show Brigid Dawson had to duck from side to side to avoid full beer cans being thrown 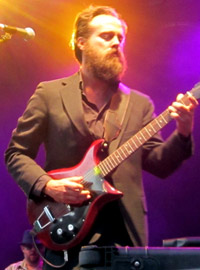 at her face and not because the audience was in dislike but because apparently that is what some call punk rock.  I, on the other hand, disagree, and it seemed as if Thee Oh Sees were not too thrilled with it either.  Besides the full beer cans being dodged the West Coast band shined in songs like “Block of Ice” and “Adult Acid”, off their album The Master Bedroom is Worth Spending a Night In.  Thee Oh Sees closed Friday night of Music Fest NW with their ability to accumulate raw, sweaty, reverb drenched sound and oh are they a sight to see!