<img src="https://www.qromag.com/wp-content/uploads/2010/05/nadasurfifihadahifi.jpg" alt=" " />Starting with the title of their covers album (a palindrome), you know Nada Surf's intentions with this release are to have fun. ... 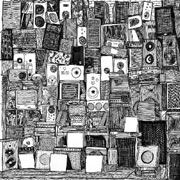 Starting with the title of their covers album (a palindrome), you know Nada Surf’s intentions with this release are to have fun.  Kicking off with "Electrocution" from semi-obscure artist Bill Fox, they add more power to this infectious pop song.  Their take on Depeche Mode’s universal hit "Enjoy the Silence" is sunny and a blast.  Matthew Caws adds a nice touch in his delivery especially on the line "Oh my little girl" and there is no reason why this shouldn’t be a big song for summer 2010.

"Love Goes On" from The Go-Betweens is lovingly covered and it’s hard to wonder if this is a tribute to the late Grant McLennan who passed away unexpectedly in 2006.  With "Janine" (Arthur Russell), Nada Surf cut the original version in half and end the song with the line "You were so warm" which lead right into a cover of a song with the same name.  Clever.  Dwight Twilley’s "You Were So Warm" is a virtual note for note rendering of a severely underrated artist.  Next, they take on Kate Bush’s only chart-topper on any U.S. chart, "Love and Anger".  It’s a nice updated version of the 1990 original.  On "The Agony of Laffitte", Nada Surf cover one of their contemporaries, Spoon (QRO live review).  They make a song Spoon wrote about getting screwed in a record deal sound pretty and maybe even sweet (until you listen closely to the lyrics).

At this point in the album, the band goes a bit schizophrenic.  They cover French chanteuse Coralie Clément’s "Bye Bye Beauté" (sung in French) then head into "Question" by British prog/pop/art/rock band The Moody Blues.  Nada Surf stretch this one out nearly one minute longer than the original and though it rocks harder, it feels a bit uninspired.  Perhaps it was meant as a launching pad for the next up-beat track, The Soft Pack’s (QRO album review) "Bright Side".  It is similar to the original and is probably better as well.  Now it’s time to sing in Spanish while covering "Evolución" by Spanish pop-rock band Mercromina.  Five minutes of somberness ensue.  Nada Surf end with "I Remembered What I Was Going to Say" by The Silly Pillows, an instrumental that just so happens to be by Caws’ sister’s band.  Overall this is a fun record.  Which is what the band intended.  Perfect?  No.  But if fun were perfect, well, it wouldn’t really be fun now would it?