QRO took our toes out of the sand for a bit to sit down with the gentlemen of NEEDTOBREATHE.... 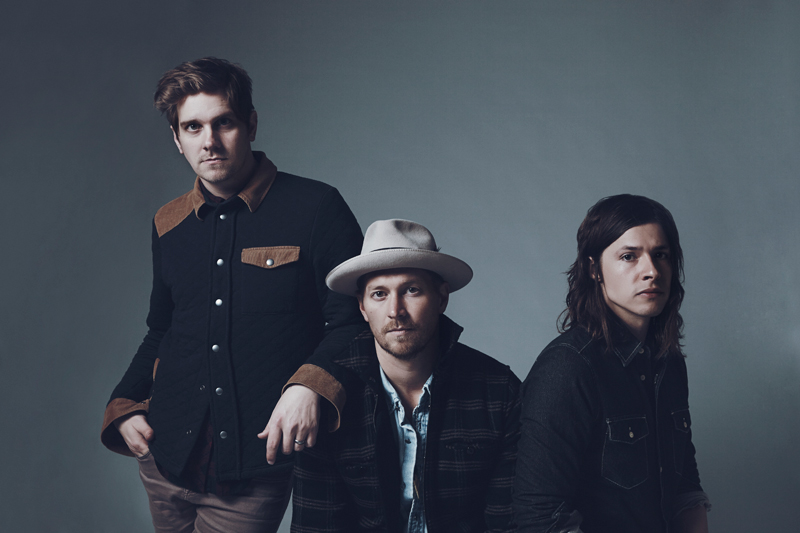 QRO took our toes out of the sand for a bit to sit down with the gentlemen of NEEDTOBREATHE, Bear Rinehart (vocals/guitar), Bo Rinehart (guitar), and Seth Bolt (bass), and talk about their Hangout Fest performance, their brand new album, and the bumps in the road that got them to where they are now.

QRO: Happy one month anniversary to Rivers in the Wasteland (QRO review)! It debuted at number one on iTunes and number three on Billboard! Have you guys slowed down at all to enjoy it?

Seth Bolt: Not yet, but we have enjoyed it!

QRO: Yeah, I guess this is a nice way to enjoy it, right on the beach! Tell me how you guys arrived at the title Rivers in the Wasteland.

SB: Well we threw around a lot of different titles in the beginning, and it was going to be called Wasteland or The Wasteland. That was the working title for most of the year we were making the record. Then towards the end of it, it didn’t feel like that fit as much as we wanted, but it felt like that’s where we started. Sort of like a place where we were definitely searching for something and looking for a little bit of hope in the process, but towards the end, Bo and I developed Rivers in the Wasteland. Bo did all the artwork!

QRO: Very nice, I like it! And this was a lot different as far as recording goes. There was a lot recorded to tape, right?

SB: Yeah that’s definitely the way we started out. We tried to limit ourselves, because in the past, or definitely on The Reckoning (QRO review), there were no limits at all. So it was like, “Oh, let’s put a choir on there or let’s put some Irish bagpipes on there!” or whatever. We decided to kind of leave that out.

QRO: Yeah, it’s a big sound but I like the stripped down sound, too. And to me, you guys are known for your live shows! There’s so much energy involved in that, and I feel like this album is a really good representation of that. Compared to The Reckoning, which is a big sound – I don’t know if that’s as easy to portray on stage.

SB: Yeah, a lot of people don’t get to see behind the curtain of what it’s like to make a record. A lot of records these days are made where it’s just one guy doing his thing at a time, so they’ll record just the drums, or do just the guitar, or just the voice. There is something that’s definitely different about everybody doing their thing at the same time, the way we would do it for a live show. So we tried to track a lot of the songs in that way instead of having it be isolated, different days, different times, different scenarios, trying to piece it together later.

QRO: What process do you like better? Big, do whatever you want, or stripped down?

Bo Rinehart: I think whatever feels genuine. Going into The Reckoning, it was very big, and it was very intentional that we didn’t put any limitations on it. We still wanted to have some raw, organic sounds, and we tried to get most of our sounds from natural elements, but we didn’t have any problem layering for days. On this record we wanted… a genuine, more vulnerable record. It proved to be a lot harder than you would think. To say “let’s simplify,” you would think that that should be simpler, but a lot of times, especially for us, to really strip down, really not use the tricks that we have to take it to all the levels, you have to really set your mind to it and keep having to draw the line.

QRO: So there’s a pretty noticeable, positive shift in emotion halfway through the new album. Was that intentional?

SB: It was intentional. We always really labor over the track list, and that felt like sort of a biographical experience, and sort of what we went through in the past year and a half. It did end a lot more positively than it began.

Bear: It was the easiest track list we’ve ever made, because it had a sense to it. Otherwise we haven’t had that; it’s been more of a musical feeling. So it’s easier when the story goes the same way. Once the songs were done it was like, “Oh this goes into that, and this goes here,” but not all the songs got written in exact order, it wasn’t like they were all sequential… but they clearly had a feeling or a meaning.

QRO: You can feel that. Like with the first five tracks, I can feel how the songwriting happened. It felt to me like they started out of necessity, where maybe you were in a bad place, but it ended up where the chorus or the bridge were really positive and powerful. That seems to be different from how the last record went. A different mindset, maybe?

Bear: In some ways it gives credit to how much forethought we had, as if we wrote the songs all at the end and just put them all in a spot. Because there is a lot of positivity on the record, and when we play the songs now like “Wasteland”, people really respond positively to that song, even though it’s a pretty dark song. When I wrote it, it was very much a dark place and I thought those things. “If God is on my side” seemed like almost, not a sarcastic thing, but from a dark place. It felt like, “Well, that’s the last thing I’ve got. I’ll just throw this up. It’s the last thing I can say.” You know what I mean? Now when we sing it, people sing that line confidently. The songs have more meaning now than we intended them to have.

We still wanted to have some raw, organic sounds, and we tried to get most of our sounds from natural elements, but we didn’t have any problem layering for days.

QRO: What’s your favorite song off the record?

SB: “Feet Don’t Fail Me Now” is one of my favorites right now. I like that one because it was one of the quickest, it wasn’t one that gave us trouble. It was a song we tracked as a band, it was cool to really be a unit. The song came together quickly. It was very fresh.

QRO: Can you elaborate more on that? I’m curious about what that song is actually about. I know what I think it’s about, but…

Bear: It’s pretty simple. If you think you’re doing something right, at least if you’re doing something right for that reason and you feel good about it, then it can’t be good. That’s the basic element of it. Any confidence or arrogance you have about doing good, that just mutes it out. So that was the idea, just don’t be too confident or arrogant; don’t get ahead of yourself, if the things that you’re feeling or doing are right.

QRO: I definitely feel like people get a different vibe from that song!

There was this moment in time where it sort of felt like we were saying things that we didn’t realize were going to mean as much as they do.

QRO: What about you, Bo?

Bo: Probably “More Heart, Less Attack”. Me and Bear were obviously going through a lot through the record. That song and “Wasteland” were written a day away from each other. So we could feel something special was going on with the record but didn’t know what yet. Then “Brother” and “Multiplied” and stuff started coming together in a process that made sense. There was this moment in time where it sort of felt like we were saying things that we didn’t realize were going to mean as much as they do.

QRO: That’s powerful, though. Really cool. Are those your favorite songs to perform as well?

SB: We have a lot of fun playing “The Outsiders”, even though that’s not on this record.

Bo: Right now it’s so fresh. We’re playing most of the songs on the new record. It’s all so new; it’s really hard to pick a favorite. Right now this show is one of our favorites we’ve ever done.

QRO: If you were to press play on your iPod right now, what would play?

Bear: I don’t know! I haven’t listened to a song in weeks, to be honest.

Bo: Foy Vance is out on tour with us right now, and we’ve been killing that record. Listening to him every night.

Bear: I just sang on John Mark McMillan’s remake of his record, he’s doing an acoustic version, so that’s probably the last thing I listened to.

QRO: So what’s next for you guys?

SB: The NEEDTOBREATHE Classic! It’s May 20th and it’ll be the first time Bear and Bo play.

Bo: There’s going to be a lot of bad golfers out there.

Bear: There will be performances and collaborations with Ben Rector, Drew Holcomb, John Mark McMillan, and Steven Curtis Chapman.

You can find out more about NEEDTOBREATHE and their favorite organization, Palmetto Medical Initiative (and the turnout for the NEEDTOBREATHE Classic!) at www.needtobreathe.com. Don’t forget to pick up their new album, Rivers in the Wasteland!