<img src="http://www.qromag.com/wp-content/uploads/2011/10/needtobreathethereckoning.jpg" alt="Needtobreathe : The Reckoning" /><br /> Needtobreathe grow to employ everything from upright bass and horn sections to banjo, mandolin, and even Irish Uillean pipes. ... 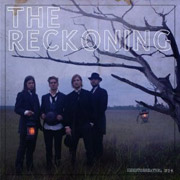 Since their beginnings, NEEDTOBREATHE have made quite the musical progression from their debut album Daylight in 2006 to their most recent release The Reckoning.  The most noticeable evolution is in terms of instrumentation.  Their first two albums Daylight and The Heat were made up of the standard rock band form: two guitars, bass, and drums.  But their last album, 2009’s The Outsiders, started them on a trend of a more southern rock form.  On The Reckoning they employ everything from upright bass and horn sections to banjo, mandolin, and even Irish Uillean pipes on the touching and heartfelt “A Place Only You Can Go”.

Click here for photos of NEEDTOBREATHE at Murat Egyptian Room in Indianapolis, IN on April 17th, 2013 in the QRO Concert Photo Gallery

Click here for photos of NEEDTOBREATHE at Murat Egyptian Room on April 12th, 2012 in the QRO Concert Photo Gallery

Click here for photos of NEEDTOBREATHE at Frank Erwin Center in Austin, TX on October 26th, 2011 in the QRO Concert Photo Gallery

Right off the bat with the opening track “Oohs and Ahhs”, these South Carolina boys are out to show that they mean business.  This is just one of many spots on the album where lead singer Bear Rinehart shows off his stellar vocal cords.  From this point all the way to the closing song “Learn To Love”, The Reckoning is an album with a positive message that clearly reflects the band’s personal beliefs.  When a band takes a message such as this and pairs it with consistently catchy melodies, the result is quite appealing and hard to resist.

With each album NEEDTOBREATHE releases it is easy to tell that they are becoming more true to themselves and the music they love to make.  At their live shows Bear Rinehart likes to open the show by saying, “We’re a rock ‘n’ roll band called NEEDTOBREATHE from South Carolina.”  That is quite simply all they are trying to be and they are doing it well.

MP3 Stream: “A Place Only You Can Go“