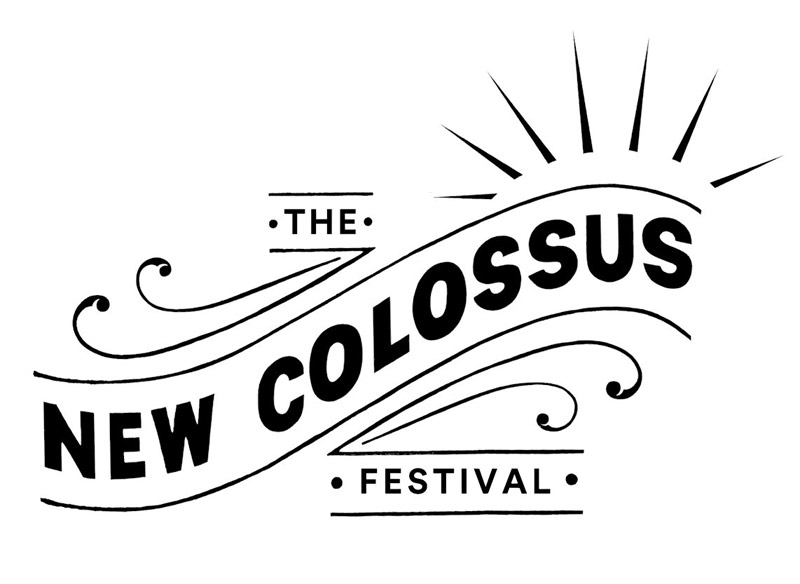 QRO: Your show makes me think of the beautiful wild quality of the land in the moors in Yorkshire where you’re from. Tell me about your New York experience… impressions?

Avalanche Party: Really cool. It was minus five when we arrived, so not dissimilar to the Yorkshire Moors this time of year. Seemed a really cool place. Met some friendly folks. Would love to come back. We’ll be back, I’m sure.

QRO: Best food/favorite bites to eat while you’ve been in the city?

Avalanche Party: Didn’t have much time to sample that much food but had a couple of great dollar pizza slices. Cheap and tasty. Just what you want on tour.

QRO: Did you catch any shows during this festival?

QRO: I know you’re an engineer and do your own production… Did you get a chance to meet up with anyone in the field while you were here or do any equipment shopping?

Sophie Nicole Ellison: Yes that’s right! I was keeping an eye out for anything that was cheap and special but I didn’t actually end up getting anything. The first thing we did though when we got into New York was go to the Times Square Guitar Centre! I’ve been before, but wanted my bandmates to have the experience, because we don’t have anything like that in the U.K. I bought a brilliant Guitar Centre cap and some guitar picks. Main Drag is also a favorite store of mine, but we went when it was just near to closing for the day. I tried a load of amazing synths there and really wanted to get a Death by Audio pedal I’ve had my eye on. I have so many of their pedals already! [laughs]

QRO: I believe this is your first time in New York – yes? Any favorite sights/interesting experiences or awesome food finds?

SE: It’s not, actually! This is my third time in two years. I can’t stay away. [laughs] I’ve got some friends I studied with who live here and I just love the city so much. It was beyond amazing to come with my bandmates and play this time.

In terms of interesting experiences, Alex [Kaiser, drums] introduced me and Chris [Pawlusek, bass] to an NYC legend and tour guide called Timothy Speed Levitch before we came to NYC. Alex was lucky to find him and arranged for us to have a tour with him of the East Village. Aside from the festival and playing, that was a highlight of the trip.

A favorite food place of mine is Abracadabra near Williamsburg and we ended up staying ages, talking to the owner and his son about each other’s cameras and records we’d bought nearby. Turns out he’s an amazing photographer!

QRO: How about shows? Did you catch anybody that you hadn’t heard before?

SE: I really wanted to catch a few people outside the festival who I knew were doing shows while we were here, like Sam Evian and A. Savage, who I’m a big fan of, but our schedule ended up conflicting, I saw so many great bands at the festival I hadn’t heard before. Palberta are my new favorite band after seeing them at The Bowery Electric. Everyone was amazing and we all met some awesome bands and lovely people. There’s a great supportive community vibe here, which I love. QRO: I heard you had an interesting time coming down here from Ontario… Has it been more difficult in the past couple of years to play in the USA?

Shade: This was actually Shade’s first time playing in the States. We’ve all toured the States in other bands though.

It was more chill a few years ago. This time we got grilled! It was intense. We made it over fine in the end, obviously, but the border patrol officer looked through our bags and found a video camera and started questioning us hard. She though we were bloggers! A car full of dudes with long hair and jean jackets… We thought she was joking!

QRO: Tell me about the evolution of Shade. I know you’ve been playing with Sam Rashid for some time, how is Shade going in a different direction from your past projects?

Shade: Yeah Sam and I go all the way back. In fact most of the band has known one another for years, it just took awhile for the band to form. Zander [Lamonthe] was our dream drummer all through high school. Musically, I think things are more honest and self aware than any of our past projects. We’re not as shy about trying new sounds and really putting ourselves out there. In the past I was super caught up in trying to fit into these genres or scenes or whatever. I got past that and loads of other musical insecurities and I think it shows. Or at least I hope it shows. We think the music is sounding pretty phat.

QRO: I have to tell you, you’ve got an arresting stage presence and you do it without a lot of theatrics. You’ve got a really strong voice. Have you always wanted to sing or is that just a by-product of making music? I mean, what comes first for you – are you a writer, a singer, or a musician first?

Shade: That’s sweet of you to say! I’m stoked I left an impression.

As for singing/writing, I kinda view it all as one package. Don’t think any of these things can be sold separately, not for me anyway. I think they’re all just different parts of the creative process. Sitting at home with a guitar is the first step in getting these feelings out. Working on the songs with the band would be the next step and playing them live is just that whole thing put into action.

QRO: Are you writing now? What’s next for Shade?

Shade: We’re heading into the studio next month to record some new songs. Hopefully get those out this summer. We’re also sitting on a lot of unreleased music but we’re holding off on putting it out. We’ve got lots more to do before we release a full record. You don’t get those songs back once they’re out!

Apart from that, we just wanna keep playing shows. Hopefully head back to the U.K. for some shows in the fall. For now it’s all up in the air. Lots we wanna do! World’s for the taking. QRO: There are so many Canadian bands here – have you had a chance to catch any of them or see anyone you’ve never seen before?

Peeling: NYC is like a second home for me; I’ve been coming here since I was a kid. My favorite things to do are definitely thrifting (Beacon’s Closet/Worship) and eating dumplings (Shanghai Dumpling/Dim Sum Go Go).

QRO: Are you planning on touring again in the U.S. soon? What’s next for you guys?

Peeling: Peeling will be back in June, hopefully hot on the heels of a new LP!

QRO: You’re playing fast and furious and have an upcoming album release in May. See any great shows at New Colossus? Any you missed but plan to catch in Austin?

Grim Streaker: We have been so busy getting ready for SXSW but loved a lot of the bands that played with us at Coney Island Baby like Motherhood and Corey Flood. We wanna catch Phantom Isle in Austin. QRO: So, what goes on for ten hours in a van when you’re dropping into NYC for a gig? Favorite songs / playlists?

Lost Cousins: That’s a good question! We’re huge fans of the board game Catan and play it constantly while listening to music. It’s a great way to pass the time, as long as no one gets carsick. Other than that, we like putting on full albums in the van and really getting into them.

Here’s a list of some of our favorite tunes right now:

– “Letting Go” by Wild Nothing

– “Half Past Nine” by Close Talker

– “Everything Apart” by Foxwarren

– “Won’t Look Back” by Geowulf

– “When Am I Gonna Lose You” by Local Natives

QRO: I imagine you’ve been logging some hours on the road in support of your debut album, In Scenery… Where are you headed next?

Lost Cousins: The album came out quite recently, so there’s still a ways to go. We plan on supporting this album over the next few years on the road. Our next stops are fairly close to Toronto (our hometown) – one at a custom guitar company in Hamilton, Ontario and the other at a cool venue in Waterloo, Ontario.

QRO: Will you have time to catch any shows while you’re here at New Colossus? Who would you love to see?

Lost Cousins: We caught as many shows as we could while at the festival, and have seen some amazing bands. We were really excited to see the band Fatherson (QRO photos from New Colossus) from Scotland, and they were incredible live. We also got to see our friends Basement Revolver’s set, and had some time to catch up with Ellevator (QRO photos from New Colossus) and Close Talker, who are both amazing bands from Canada.