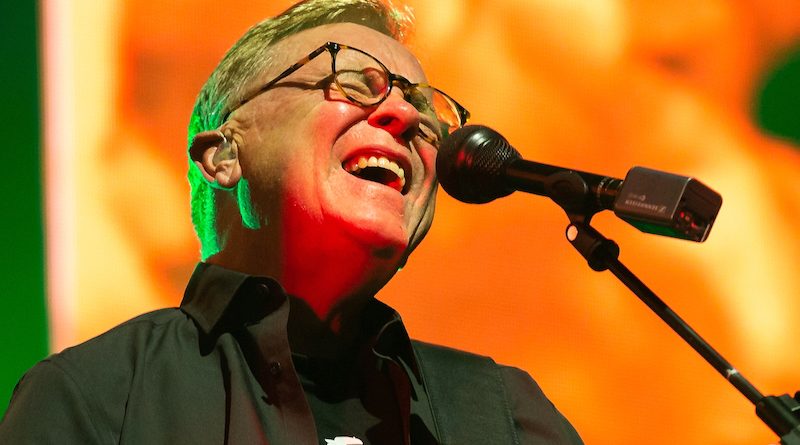 After a two year postponement, ‘80s synth-pop hitmakers Pet Shop Boys and New Order kicked off their Unity tour at the Budweiser Stage in Toronto on Saturday, September 17th. The first show of a tour is always fun and sometimes unexpected so it was interesting to see what kind of setlists these two prolific bands would come up with. Everyone has their favorites and could only keep their fingers crossed.

Click here for photos of Pet Shop Boys at Orpheum Theatre in Boston, MA on November 9th, 2016 in the QRO Concert Photo Gallery

Click here for photos of Pet Shop Boys at Terminal 5 in New York, NY on April 26th, 2014 in the QRO Concert Photo Gallery

Click here for photos of Pet Shop Boys at Arlene Schnitzer Concert Hall in Portland, OR on October 4th, 2013 in the QRO Concert Photo Gallery

Opening for the Pet Shop Boys and New Order was internationally acclaimed DJ Paul Oakenfold. Unfortunately, media was not allowed into the venue at all for Oakenfold’s set and half of the Pet Shop Boys’ set since photographers were set to shoot songs 13-15 of the 19 song setlist. However, listening from the outside, Neil Tennant sounded fabulous! In this day and age, it’s nice to hear that some old school acts can still bring the vocals (assuming we’re not hearing a backing track). As usual, keyboardist Chris Lowe stayed well in the background. Several tours ago, they did some cool set design with a bed. Not sure if there were any interesting set work done on this tour, but hey, did create a fun party atmosphere, though. The Pet Shop Boys closed their encore with “West End Girls” from “Please” and “Being Boring” from “Behaviour”.

Photos of New Order at Budweiser Stage on August 30th, 2018

Photos of New Order at 2015 Day For Night Festival in Houston, TX

Photos of New Order at 2013 Live From Jodrell Bank in Cheshire, U.K.

When many fans started leaving after Pet Shop Boys finished their set, it makes you wonder if perhaps they should have been the headliner. All fears were assuaged as soon as the first notes of “Regret” played through the dark. With most of their original lineup playing together, it was definitely like we were back in the ‘80s. Again, New Order’s set was one big dance party but some of the fans seemed to only know their biggest hits… a bit disappointing considering their storied career. The party did get into full swing as they closed out the set with “Bizarre Love Triangle”, “True Faith”, “Blue Monday” and “Temptation”. World changing dance hit “Blue Monday” would have made for an amazing encore, but the band obviously had it right when fans started rushing forward so they could record the actual encore, “Love Will Tear Us Apart”, on their cell phones. Interestingly, New Order’s set was only fourteen songs while the Pet Shop Boys played nineteen! Either way, it was a very satisfying trip down memory lane, even if media was only able to get in halfway through the show.