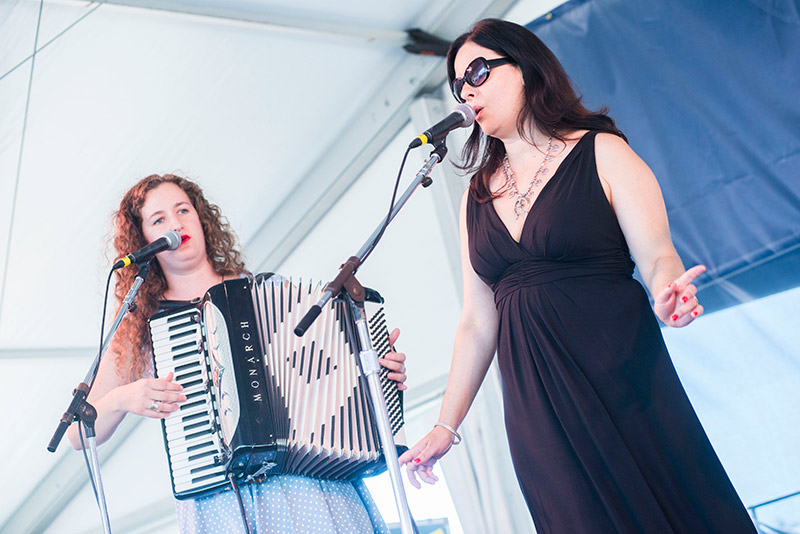 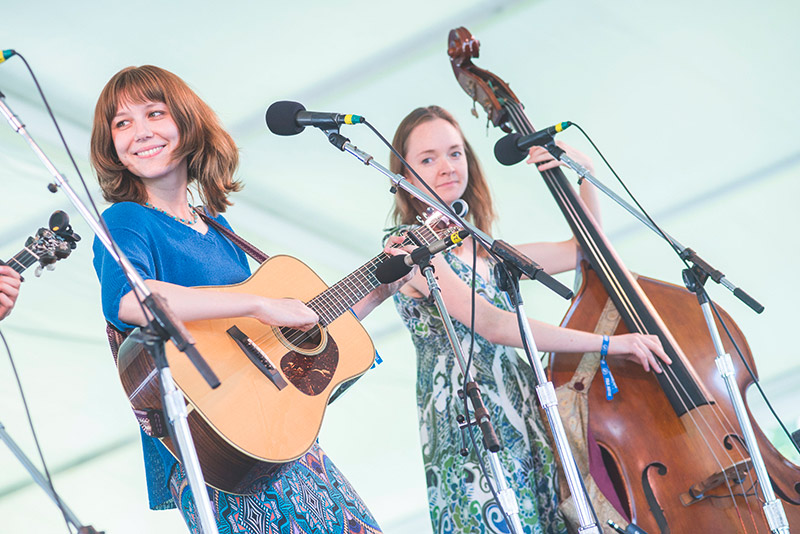 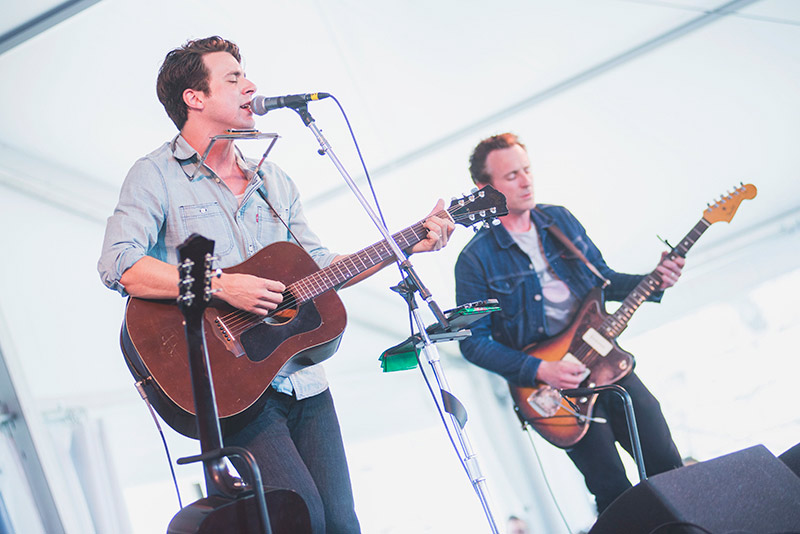 Getting things out of the way, Fort Adams is a beautiful place to hold a festival. There’s not a bad seat in the field and people treat Newport like a weekend at the park. Blankets were laid, chairs were unfolded and waves of great acts washed over you across three well-placed stages. If your only experiences with festivals are mega-events like Coachella or Lollapalooza, run to Newport as fast as possible. 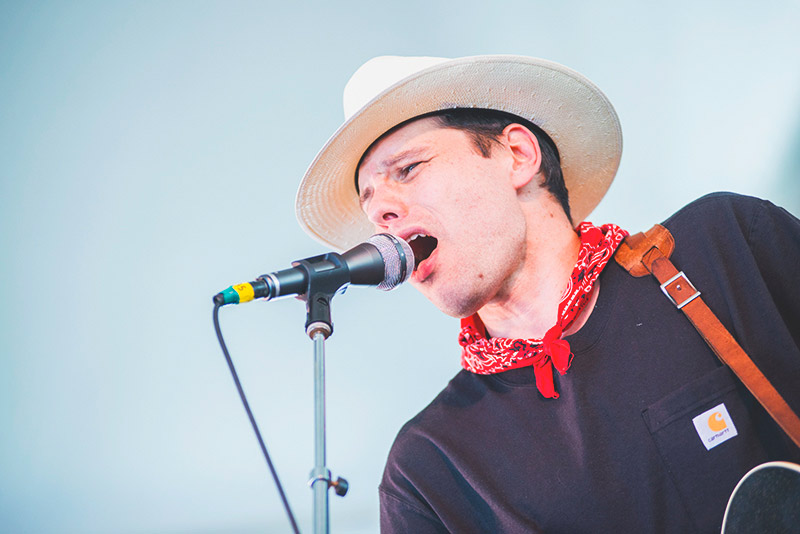 My Newport experience began with the New Breed Brass Band at the Fort Stage. It was the beginning of a trend for the weekend. Get a band up there that wants to make some noise and win over the audience. There was a lively swing and a nod to New Orleans that had the fans bouncing around the fields. Over at the Quad, Bahamas was bringing his take on folk to a rapt crowd. A Canadian opening his Newport Folk set with a cover of D’Angelo? I’ll allow it. Afie Jurvanen was at home on stage and easily mixed banter into his songs without missing a beat. Closing with “Into the Light” and “All the Time”, Bahamas left his mark early at Newport. 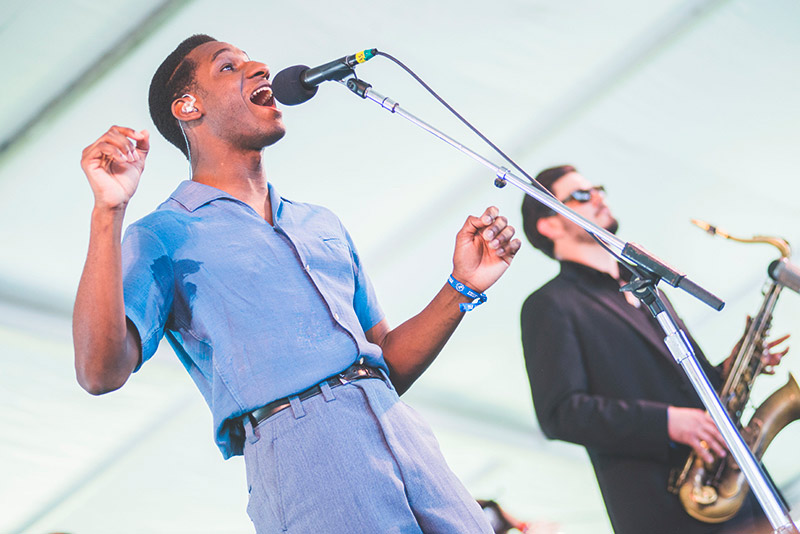 Leon Bridges followed Bahamas on the Quad Stage and the fans treated him like a mini-headliner. The tent was packed and he drew a large crowd early in the afternoon. His retro soul was right at home and he was back by a fantastic band. Dancing and energized, Bridges is slowly getting comfortable with his stardom. I was worried after the New York Times review, but none of that stiffness seemed to be present at Newport. His voice is commanding and timeless, and there’s an assured style that’s beyond his youthful age. Whether it’s “Brown Skin Girl” or “Coming Home,” Bridges never misses a beat. Bridges feels like a polished veteran and that’ll translate well when he plays bigger stages. 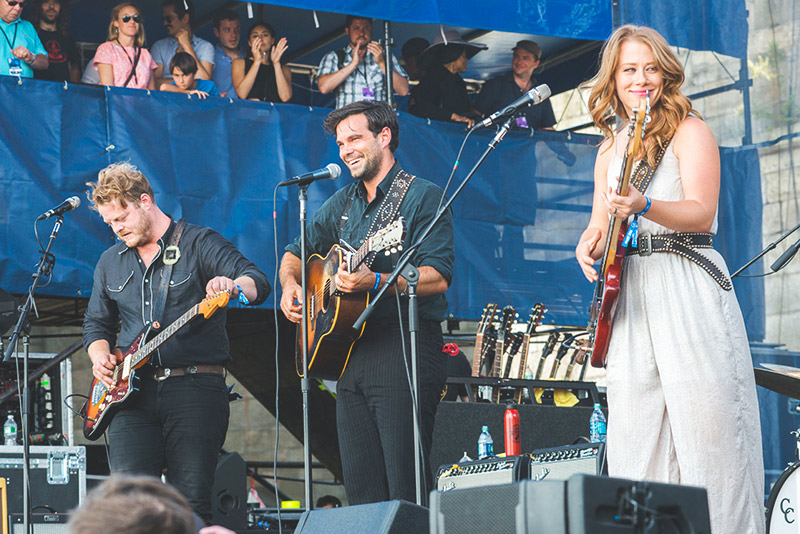 The Lone Bellow was a more traditional folk act with a punch that matched the blistering sun. Their songs build to memorable climaxes of love and heartbreak. The Lone Bellow continues folk’s evolution as they embrace beautiful harmonies and rock and roll. With another trend we would see throughout the weekend, Bridges joined The Lone Bellow for “Watch Over Us”. The artist collaboration continued as Lucius followed the Bridges cameo for a cover of “When Will I Be Loved”. As if that wasn’t enough, Sarah Watkins joined the band for another number. 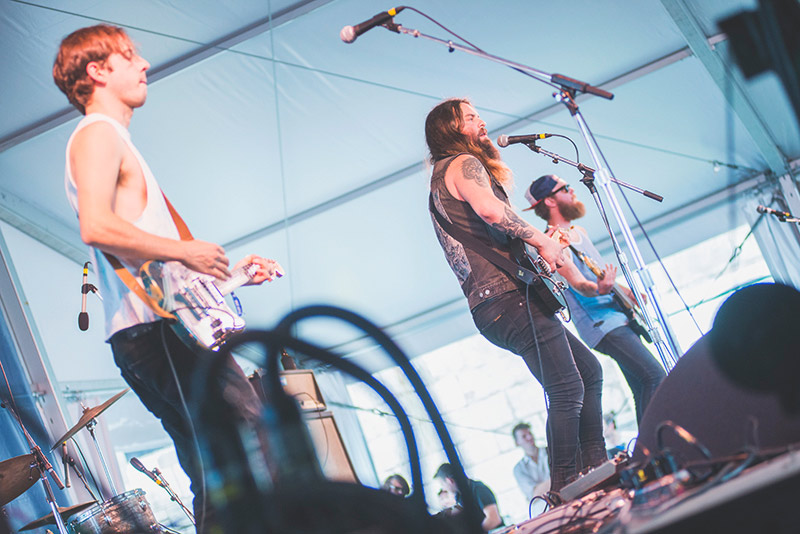 That great feeling of camaraderie continued on the Quad Stage as Sam Beam (a.k.a. Iron & Wine) joined Calexico for two songs. Beam sang on “He Lays in the Reins” and “Bullets and Rocks”. Ben Bridwell, of Band of Horses, would also join Calexico during their set. Easing into the second-half of the day, Strand of Oaks took over the smallest stage of Newport and drew a large and rowdy crowd. There wasn’t too much folk to be found in the set as guitars drove the action, but it’s Timothy Showalter’s songwriting that is folk at heart. 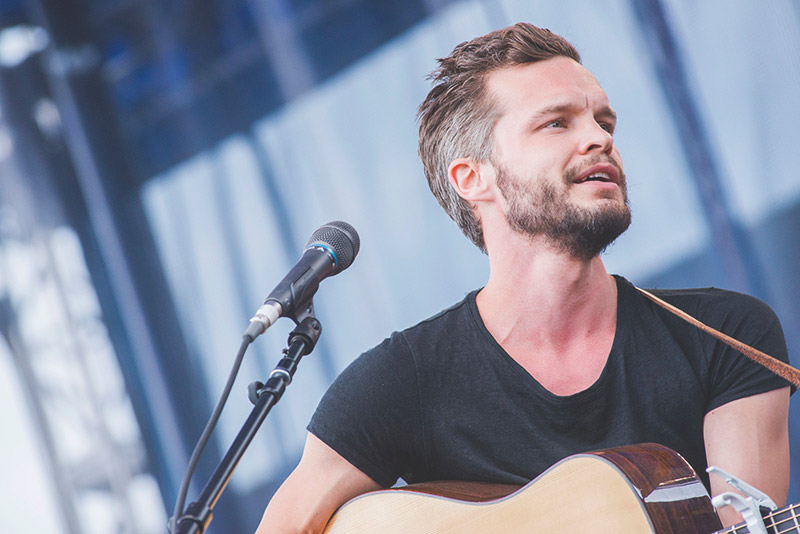 The Tallest Man On Earth was not alone when he played the Fort Stage. Backed by a band, Kristian Matsson started his set with “Fields of Our Home”. Sure he has that Bob Dylan rasp, but that would be doing The Tallest Man On Earth some disservice. There’s never a dull moment as he struts, preens and belts out songs with his guitar at his hip. Battling possible thunderstorms and a murderers row of conflicts on Friday, that didn’t seem to faze Matsson. 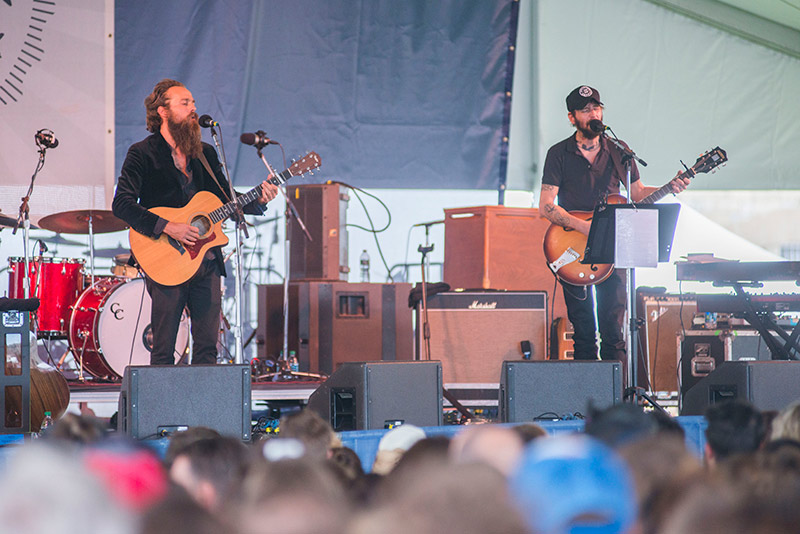 Iron & Wine fared better under the Quad Stage tent. There was some sound bleed during the quieter moments, but Beam’s voice kept everyone’s attention. Guest Bridwell was no slouch and the two vets knew how to trade verses and use their different voices to create dramatic moments.

Their friendship is a joy to watch as they play songs that have influenced their careers. The set was filled with covers from their latest album including Talking Heads’ “This Must Be the Place (Naive Melody)” or Spiritualized’s “Straight and Narrow”. 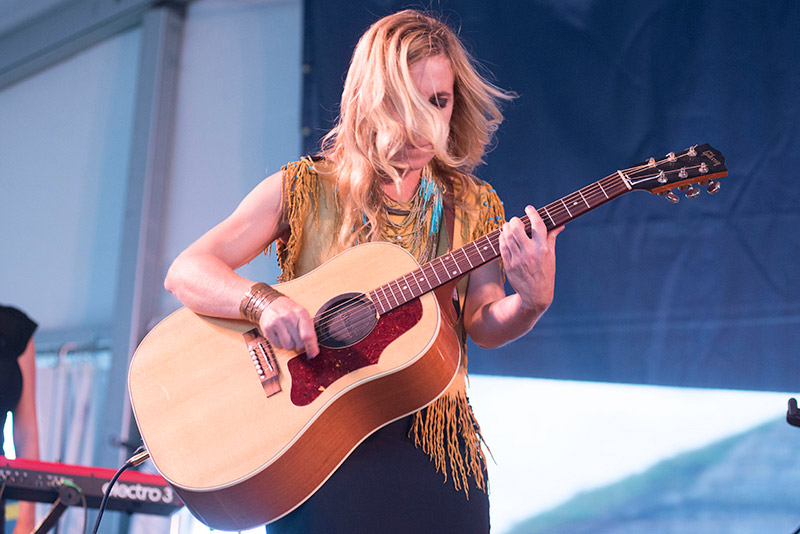 The Harbor Stage was the unsung champion of the festival. There’s the great grassy knoll next to the stage and a nice brick fort to amplify the guitars. Following Strand of Oaks, Heartless Bastards was another heavier act that was a nice alternative after Iron & Wine and The Tallest Man On Earth. Leon Bridges was a big fan of theirs and he took time from his busy schedule to check out their set among the fans. Heartless did what they do best during their debut Newport set and rocked out. Her distinctive voice wails and soars. 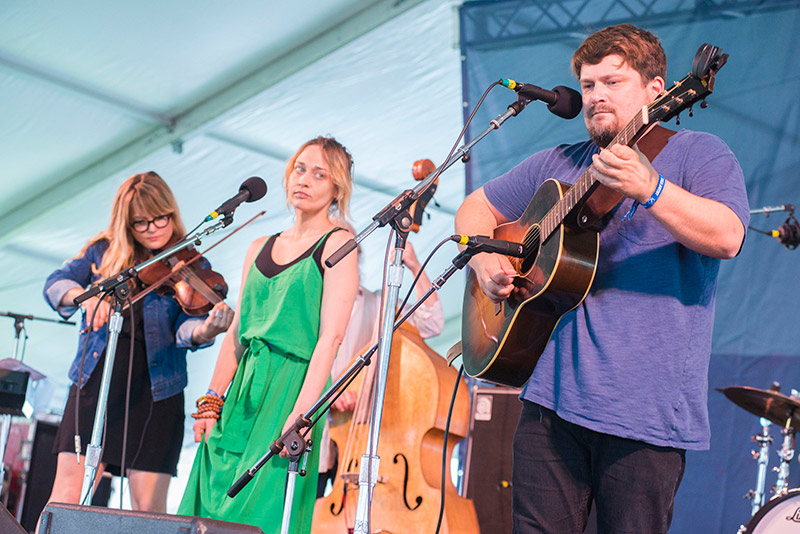 The unannounced set ahead of Roger Waters had every speculating and throwing out every name associated with Waters. A few minutes after 5:30 p.m., My Morning Jacket was announced and what a surprise. The folk superstars are big enough to headline Newport on their own and here they were playing a surprise hour set. Everyone was standing and this surprise was Newport at its finest. The artists absolutely love this festival and want to show up for the heck of it.

As for the actual set, it’s My Morning Jacket and delivered on everything you heard about their live set. Pulling from their latest, The Waterfall, and their extensive catalogue, it was set tailored to maximize festival fun. 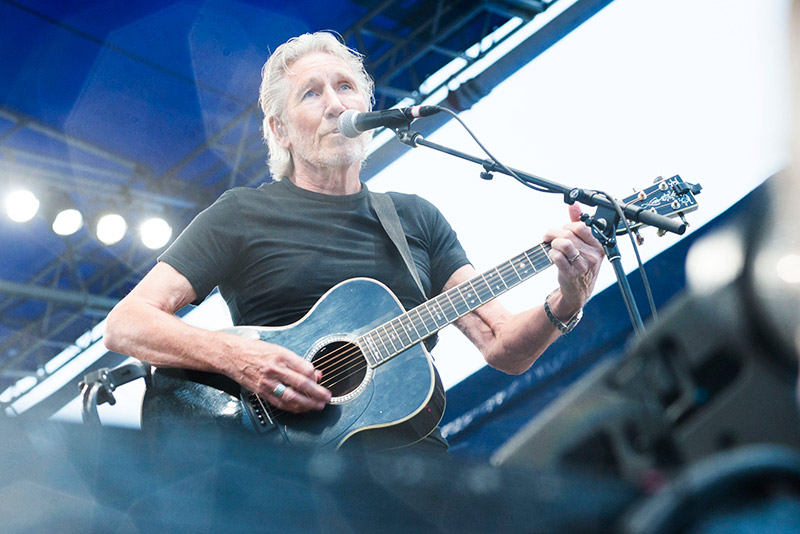 Rather than leave the stage, Roger Waters joined the band to start his own set with a new song. “Crystal Clear” saw the legendary Pink Floyd co-founder behind the piano for the first time ever in public. Waters’ superstar band was rounded out by Lucius and guitarist G.E. Smith (of Saturday Night Live). There was some rain, but no one seemed to mind. After the new song, Waters sang “Mother” and songs from his reissued Amused to Death. Waters was all smiles on stage, and the backing band & he paid tribute to the folk history with covers by John Prine and the set closing cover of Bob Dylan’s “Forever Young” that featured riffs and shared turns in the spotlight. There was a Levon Helm cover and “Wish You Were Here” thrown in for good measure. Day One of Newport Folk Festival was in the books and there were plenty of surprises still in store for fest goers.