Another year of the ultimate summer camp for adults has officially come to a close.﻿... 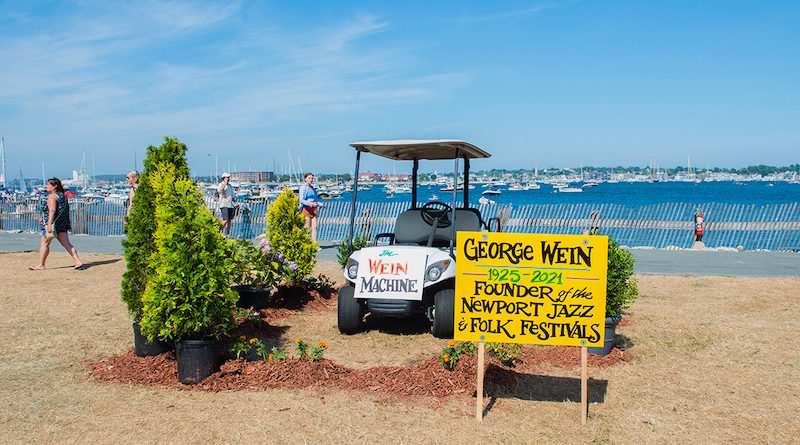 The festival’s director, the larger-than-life Jay Sweet, opened the festivities with a touching tribute to Newport favorite John Prine, and an introduction to the first ever John Prine Songwriter Fellowship winner, Leith Ross. It was the perfect beginning to a festival that has made it it’s mission to honor the roots and the titans of folk music while also giving a platform to the up-and-coming artists who now carry that torch. Even the 90 degree hot sun does not stop Sweet from running around the fort for days straight, making it more than obvious he feels this responsibility and duty deep in his soul.

As the festival has evolved, its commitment to upholding the legacies of the folk traditions and the icons who have graced its stages is never far from Sweet’s mind – even as it has grown to encompass a more broad understanding of folk music.

The highlight of Friday was the diversity of the lineup itself. Many first-time Newport artists, including Faye Webster (as an exciting last-minute addition) and Cassandra Jenkins, were on the bill with Newport greats like Taj Mahal and Béla Fleck. The musical stylings on offer ranged from the grunge rock of Dinosaur Jr that shook the Quad Stage, to traditional bluegrass, and even the energetic soul music of Lee Fields. All of this brought the mellow Friday to a conclusion with The National, playing indie favorites and debuting a new song, “Space Invaders.”

Saturday jumped right in with some of the biggest heavy-hitters of the lineup. Canadian alt-pop singer Hannah Georgas opened the Harbor Stage and The Ballroom Thieves returned to Newport to kick off the Fort Stage. Newport favorite Hurray for the Riff Raff was another welcomed last minute addition to the lineup and even Natalie Merchant hopped on stage with a few acts throughout the weekend. Lucy Dacus returned for her second year in a row, getting the Fort Stage rocking out by closing with “Night Shift”.

Clairo commanded the Fort Stage with a full band and a level of musicianship that made her bedroom pop-style songs truly come alive. She regaled the audience with a story of how she got on stage with The Decemberists during one of their Newport sets as she was babysitting their bass player’s child as a 15 year old, even bringing Chris Funk on stage for a song. A truly full circle moment that felt distinctly Newport.

One of the highlights of Saturday’s festivities came from powerhouse Adia Victoria, whose mix of Southern blues and punk rock was exactly the type of set that can only be witnessed at Newport. Playing from last year’s A Southern Gothic, Victoria reminded the audience that rock and roll and the blues originated with black musicians and that the luxury of standing on the grounds of the Newport Folk Festival would not have been possible without those contributions that we have an obligation and duty to honor. Victoria commanded the stage, crowd surfing over the audience before bringing her beaming mother on stage – an image that will surely live in the collective consciousness of all those who were lucky enough to see it for years to come.

Another highlight was Lucius’ full set that included an appearance by Goose, now immortalized as “Goocius.” The closing set, dubbed “American Tune Revue” was led by Nathaniel Rateliff & The Night Sweats. Rateliff and a series of special guests sang Paul Simon songs until Paul Simon himself made his Newport Folk Festival stage debut to an elated crowd. The guests included Phil Cook, Robert Ellis, and Rhiannon Giddens, among others. Simon ended with a rendition of Simon & Garfunkel’s 1964 song, “Sounds of Silence.”

Day Three continued the educational aspect that is a cornerstone to the work the non-profit festival does on a daily basis. A pop up set by Celisse was a tribute to the legacy of Sister Rosetta Tharpe and keeping her name, music, and legacy alive. Valerie June continued this sentiment on the fort stage with her unique mix of blues, Americana, and folk music entwined with her effervescent warm energy. Meanwhile at the Quad Stage, punk newcomers The Linda Lindas called for “the kids to the front” and harkened to a music history that they were not even alive to see, as their band members range from 11 to 17. Newport is truly one of the few music festivals that brings center the context and history with each act of its curated lineup.

Sylvan Esso debuted their new album, “No Rules Sandy”, in its entirety that had the hot and dusty ground in front of the Fort Stage feeling like a dancehall in Brooklyn. The Roots kept everyone dancing with a high energy performance despite the heat and lived up to the hype they received when they were announced on the lineup.

Anyone who has attended the Folk Festival in the past few years knows that when Brandi Carlile is on the lineup, she has a few tricks up her sleeve. In 2019, it just so happened to be Dolly Parton (QRO photos). The Allison Russell-curated closing set of 2021 (QRO photos), gave the audience a sing along to “I’m Every Woman” with Chaka Khan. And in 2022, Brandi triumphantly introduced Joni Mitchell to the stage – her first time being back at Newport since 1969 (and first live performance in twenty years).

The stage was set up in a semicircle, with couches and a beautiful chair for the icon herself, complete with candles, orchids, and even wine. The audience was transported to the “Joni Jams” – the sacred and elite jam sessions that took place in Mitchell’s home over the last few years, with a core group of musicians that included Carlile herself and even Elton John. Here, they would play music for Mitchell over a glass of wine (or five). At first Mitchell was only there to listen, but soon she began to sing. Carlile saw an opportunity for something truly special, and knew Newport was the place where it could come to fruition.

Joni Mitchell sang “Both Sides Now” to a silent crowd of 10,000 people and the impact of the moment was not lost on a single person, including those onstage. The Joni Jam included Celisse, Lucius, Marcus Mumford, Wynonna Judd, Allison Russell, Blake Mills, Taylor Goldsmith, and others – and not a dry eye was to be found amongst them. The set alternated between those on stage singing Joni Mitchell to her (including Celisse singing “Help Me”) to Mitchell taking over and singing a full set for the first time in decades. It was the type of once-in-a-lifetime set that in twenty years you can proudly proclaim, “I was there,” as an ultimate folk music nerd flex.

Not enough can be said about Jay Sweet and Brandi Carlile’s commitment to the fight to get the recognition the legends like Mitchell deserve, and Newport has always felt like a sacred place to celebrate artists with every possible generation of music fan. Sweet and Carlile may need to resurrect Sister Rosetta Tharpe herself next year to top this weekend’s events, but luckily they have the full support and trust of the Newport family.

While the long 365 day wait for next year’s Newport Folk Festival officially begins, festival-goers return to their regular lives – but hopefully with the sweet memory of this historic weekend still fresh in their minds. And maybe a few will even pop “Blue” onto the record player with a bottle of wine tonight.