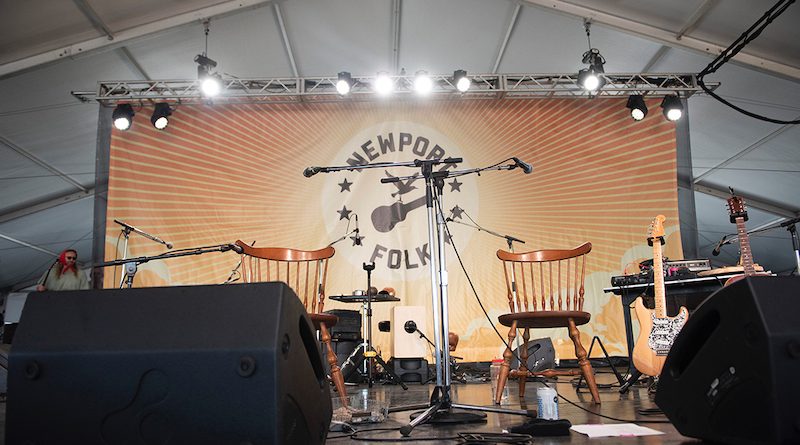 Saturday jumped right in with some of the biggest heavy-hitters of the lineup. Canadian alt-pop singer Hannah Georgas opened the Harbor Stage and The Ballroom Thieves returned to Newport to kick off the Fort Stage. Newport favorite Hurray for the Riff Raff was another welcomed last minute addition to the lineup and even Natalie Merchant hopped on stage with a few acts throughout the weekend. Lucy Dacus returned for her second year in a row, getting the Fort Stage rocking out by closing with “Night Shift”.

Clairo commanded the Fort Stage with a full band and a level of musicianship that made her bedroom pop-style songs truly come alive. She regaled the audience with a story of how she got on stage with The Decemberists during one of their Newport sets as she was babysitting their bass player’s child as a 15 year old, even bringing Chris Funk on stage for a song. A truly full circle moment that felt distinctly Newport.

One of the highlights of Saturday’s festivities came from powerhouse Adia Victoria, whose mix of Southern blues and punk rock was exactly the type of set that can only be witnessed at Newport. Playing from last year’s A Southern Gothic, Victoria reminded the audience that rock and roll and the blues originated with black musicians and that the luxury of standing on the grounds of the Newport Folk Festival would not have been possible without those contributions that we have an obligation and duty to honor. Victoria commanded the stage, crowd surfing over the audience before bringing her beaming mother on stage – an image that will surely live in the collective consciousness of all those who were lucky enough to see it for years to come.

Another highlight was Lucius’ full set that included an appearance by Goose, now immortalized as “Goocius.” The closing set, dubbed “American Tune Revue” was led by Nathaniel Rateliff & The Night Sweats. Rateliff and a series of special guests sang Paul Simon songs until Paul Simon himself made his Newport Folk Festival stage debut to an elated crowd. The guests included Phil Cook, Robert Ellis, and Rhiannon Giddens, among others. Simon ended with a rendition of Simon & Garfunkel’s 1964 song, “Sounds of Silence.”