The fourth and final night of Nice, A Fest concluded in the hallowed depths of The Rockwell on a sleepy Sunday.... 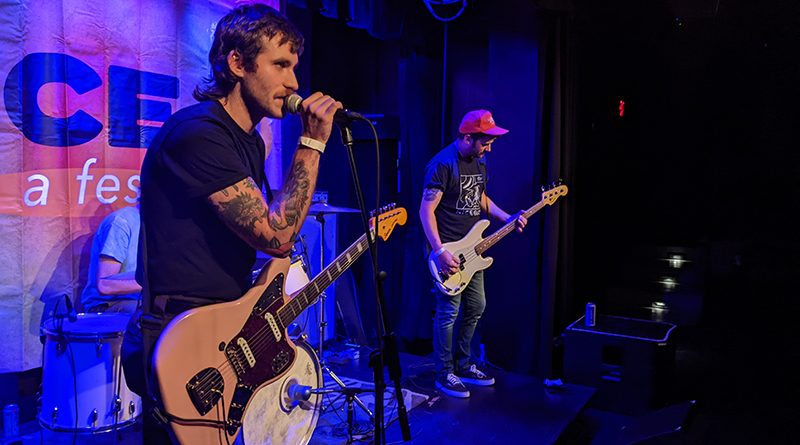 The fourth and final night of Nice, A Fest concluded in the hallowed depths of The Rockwell on a sleepy Sunday, July 31st. The event was officially billed as an ‘afterparty’ of the music festival. If you still were rocking your three-day wrist-pass from Thursday, Friday, and Saturday – which is kinda gross, let’s be honest – admission was free. Boston locals Black Beach headlined with Anna Fox Rochinski, Doll Spirit Vessel, and Gut Health in support.

Pickle juice from the ubiquitous pickle sponsor was reportedly available behind the bar for mixing into Pickleback-type concoctions, though The Rockwell lacks a full bar and mostly leans on pre-made cocktails. Is the to-go pandemic cocktail still a thing? Is it the kind of service or product that crops up in times of crisis and, suddenly, no one can imagine life without it after the crisis subsides?

Gut Health opened the last set of the 2022 edition of Nice, A Fest. Doll Spirit Vessel followed, clocking a Somerville show while on tour. The four-piece indie rockers come tantalizingly close to being able to pull off a 4 Non Blondes band costume for Halloween – the hazel-haired drummer has to get on board. DSV’s frontwoman has a powerful voice that carries songs to interesting places. You’d like to hear the other instruments open up the compositions a bit more. The arrangements at times still feel like solo acoustic numbers, which is how a lot of songs get written, but not how they get performed in the band concept.

It was a treat to catch Anna Fox Rochinski’s latest project apart from Quilt. She’s assembled a five-piece with some local flavor, consisting of two keys, bass, drums, and herself on guitar and vocals. While she’s the animating creative force in the group, Rochinski is clearly looking for more than a singer-songwriter platform with the band. The compositions contain a lot of details, electronic curlicues made possible by three banks of keyboards. The five-piece sounded best when they found their danceable groove with a strong rhythm section and swept aside the fuss. Shades of Luscious Jackson.

Headliner Black Beach closed out the now four-day festival with a trim art-core attack. It’s not quite Jimi Hendrix closing out Woodstock in the rosy-fingered dawn, firing up the Star-Spangled Banner, but there was a certain grandeur given the epic scope of Nice, A Fest. Three days of music is nothing to sniff at, let alone four. Previously a one-day event at Boynton Yards, the festival ballooned to four days at two venues (three, if you rightly count Somerville Theater). In truth the music event probably did not need to be so massive. A tighter two-day bill would have been a satisfying experience with maybe a more focused personality. But sometimes you go big just to see how big you can go. Every artist on the bill remarked on the smooth operation and good vibes, so chalk it up as a great success.

The local trio of guitar, bass, and drums pack a No Wave wallop. There’s a ripping loud-quiet-loud dynamic in Black Beach’s sound that can get the crowd moving on your average night. On Sunday though the response was appreciative but a little mute. The Scaries had taken hold of many who were probably still shaking off a hangover from the previous nights of music. A pickle juice-based cocktail is probably not in the cards for a while.