The third and not final installment of Nice, A Fest raised the stakes once more, stretching the bill across the whole day in addition to the night... 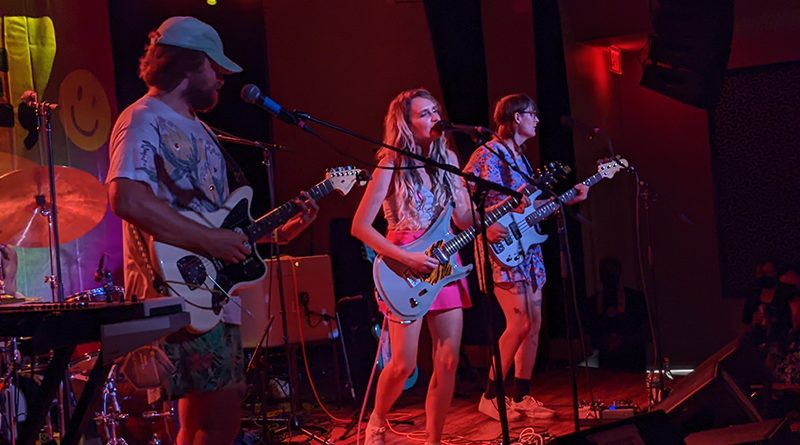 The third and not final installment of Nice, A Fest raised the stakes once more, stretching the bill across the whole day in addition to the night of Saturday, July 30th. Both The Rockwell and Crystal Ballroom were rocking. There was a slight de-sync of the schedules between the two venues, so if you timed things just right, you could catch twice the artists and still squeeze the whole Nice, A Fest circus into the Ballroom together to hear the headliner Speedy Ortiz play into the morning hours.

If you were making the rounds between venues, you likely ran into Keytar Bear more than once. The Boston music-making ursine legend has been an unpredictable fixture at pedestrian traffic choke points for more than a decade. KB kept the Davis Square intersection vibing all afternoon.

The music started early at The Rockwell, in the cool, subterranean temperatures thirteen floors below the Earth’s upper crust, among the fossilized remains of dinosaurs, lakes of undiscovered petroleum, and secret untapped veins of precious gems. Massachusetts old soul took the stage, followed by Addie, Children of the Flaming Wheel, and a righteous, noise-stomping one-two punch of Gollylagging and Stoughton’s Crescent Ridge.

Meanwhile at Crystal Ballroom the kickoff honors went to Trash Rabbit, followed by the chiptune glory of (T-T)b, and local nice guys Kind Being. The four-piece Layzi picked up the baton. The band sports the classic two guitars, one bass, and drums combo to turn out dream pop fit for a nice afternoon stone. Shades of The Cardigans.

Twen was a pleasant surprise. If you listened to the single “Feeling In Love (From the Waist Down)” off their most recent LP One Stop Shop, you knew the five-piece band had a satisfying throwback sound. But you might have heard mostly ‘70s notes. Twen announced their love of more recent Britpop loud and clear, mixing in an Oasis cover of “Don’t Look Back in Anger”. From then on a thousand points of contact between ‘90s pop came into focus. Shades of Alanis Morissette with the strong fronting vocals owning the rock ‘n roll sound. Extra points to the drummer for making sweet love to those skins.

Pink Navel might have had a monopoly on hip-hop at Nice, A Fest. It was a nice change of pace, as the mask-less man behind the mask Devin Bailey performed tracks off his latest LP Epic along with some old favorites. The artist brings a mix-master intensity to his live shows. He’s no karaoke rapper, goofing against a wall of pre-recorded tracks. Expect to never hear the same song twice as he tweaks the knobs and fiddles the switches on the fly. Count yourself lucky if you picked up one the ten remaining vinyl copies of Epic at the merch table because they’re not available on Bandcamp. Shout out to the Star Wars Discourse.

Really Great wins the award for recruiting the youngest music fan. This little kid went super viral on all social media platforms, jamming out to tunes from the four-piece’s latest LP So Far, No Good. The adorable tyke will be making the talk show rounds on The View, Good Morning America, Fox & Friends, and regrettably, Tucker Carlson. When asked to comment on his fiery brand of firebrand preschool politics, the child drooled, picked his nose, and exclaimed, “Weezer vibes!”

Evil Felipe kept the ball rolling at The Rockwell. The four-piece sported the classic two guitars, one bass, and drums combo to punchy effect. The frontgals traded vocal duties. Rumor has it they were giving away disposable cameras for free at the merch table. America is a truly great country!

Meanwhile at the Crystal Ballroom, Bat House and Shallow Pools traded the spotlight. Haasan Barclay followed. If you listened to his latest electro hit parade DUAL SHOCK, you were probably wondering how the Pro Tools vibe would translate to the live show at the Crystal Ballroom. Barclay threw the audience a curveball by leaning on a cherry red guitar throughout the set, distancing his sound a bit from the ambiance of the album. The live instrumentation holds beautiful possibilities – you wonder how the set might sound with a live drummer (and maybe a bassist) to pull the performance out of the digital realm and even further into a righteous analog bubble bath.

Another surprise/not-surprise of the evening were the rock n roll stylings of Lady Pills. Previously painted the three-piece as rock, “with the beating heart of country,” after listening to their single “Daughter”, and we’re going to die on that hill! Granted, the band kicks out rock jams aplenty, but the voice that floated above the set at Crystal Ballroom longs for the tall sweet grass of cattle country.

Hallelujah The Hills brought their own props and were set to light up their anthemic indie rock as the sun set on Davis Square. The six-piece rolls deep, with keys/horn, violin, guitar/vox, bass, guitar/keys, and drums being the usual assignments. They played selections from their latest LP, the distinguished I’m You, along with old favorites. There is a kind of inner momentum to a HTH’s show (and most of their songs) that builds up over time, and grabs you, and pulls you along. When it was time to play the last song, the crowd wasn’t ready to let them go, but the stage schedule of an eleventh-hour bill rules everything around us. Extra points for weighing in on the Keytar Bear Discourse.

Meanwhile Circus Trees, Zola Simone, and Mallcops were holding it down at the Rockwell.

Chicago’s Rat Tally returned to the east coast to play The Rockwell. The band has some local roots. Fans and friends were in attendance for the indie pop rock and the set had a fun, homie vibe. Rumor has it Rat Tally is putting out a new album on August 12th.

Boston’s Kal Marks ripped it up next at The Rockwell. Rumor has it that the four-piece was selling early copies of their new record My Name Is Hell at the merch table, a bit before the official release. We heard plenty of new tracks off the new album, plus some old chestnuts. A Kal Marks show comes with its own type of intensity. Sometimes that’s just in the howling squall of a dissonant guitar; other times it’s acted out in the crowd. There was a righteous little mosh pit going there for a hot minute. All good, all fun, all in a day’s work. The crowd wasn’t ready to giving the band up when the set time witching hour struck.

Raavi closed out the night at The Rockwell. The four-piece band includes two guitars, bass, and drums – did we recognize a guitarist from Pisha making an encore performance with Raavi? Raavi the band takes most of its musical direction from Raavi the person. They play a brand of thoughtful indie rock that can shred fast & loose or play it soft & low. You can expect a new single on label Hardly Art coming out September 22nd. Check it out.

Meanwhile Rebuilder and Weakened Friends were holding it down at Crystal Ballroom. If you timed it right, you could catch Raavi closing at The Rockwell then hoof it over to the Ballroom for headliner Speedy Ortiz. The local legend is no longer local, but still a legend. It was a crowded house, standing room only. Shout out to Sadie Dupuis for writing a song about scabs. Is that about union-busters or the epidermis? Who can say for sure, art is subjective. For example, Wayne’s World 2 might be the best film ever committed to celluloid. Who can say for sure?

If you had it in you, there was a fourth day of Nice, A Fest that unfolded on Sunday. Gratis for three-day passholders, otherwise tickets were available to purchase. Call it Nice, An Afterparty at The Rockwell. The pickle-based cocktails were still on the menu. Come Monday you can be mean again.