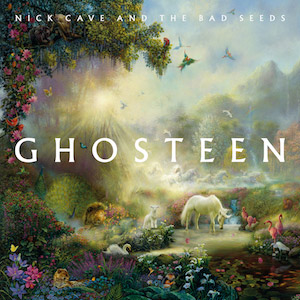 There are precious few artists like Nice Cave, who has ranged from blues-rock (in his Grinderman outfit) to intimate piano, who has done everything from novels to soundtracks. Yes, he is not someone who it is easy to get a handle on, but that only makes it greater when you do. Latest release Ghosteen is everything you could imagine from the singular auteur.

While making his last record, 2016’s Skeleton Tree (QRO review), Cave’s teenage son Arthur died falling from a tree. The raw grief came out in his lyrics, and the album couldn’t help but be viewed through this tragic lens, but much of the music had already been made beforehand. Where others would understandably retreat into their own shell, Cave came out & was drawn out (notably by his wife Susie, as well as collaborator Warren Ellis), as seen on impressive documentary One More Time With Feeling (QRO review), and recently with his AMA-type website Red Hand Files and Q&A tour ‘Conversations With Nick Cave’ (QRO review). From the name on forward, Ghosteen is another expression of what this expressive artist has gone through & is going through.

It should be noted that it is a long record, a double-album clocking in at over an hour, songs reaching over fourteen minutes. The intimate piano storytelling is extended, each track a journey through darkness, often (but not always) into light. Pieces such as “Spinning Song”, “Ghosteen”, “Fireflies”, and closer “Hollywood” (wherein Cave manages to practically do a whole tragic L.A. novel, and whole tragic village tale) make Ghosteen a record to be sat down and experienced.

So do not go into Ghosteen lightly, do not chop it into parts, don’t put it on in the background. But very much do embark on Nick Cave’s powerful journey.