Nick Cave’s Son Arthur's ghost hangs over a record that is a uniquely powerful expression of grief.... 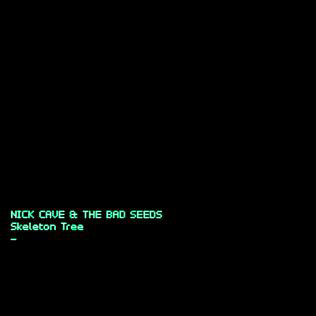 After all of the changes that Nick Cave & The Bad Seeds went through before 2013’s Push the Sky Away (QRO review) – departure of second-last remaining charter Bad Seed Mick Harvey, starting up their own label, Cave doing the garage thing with Grinderman (QRO album review) – follow-up Skeleton Tree could have been a somber continuation of Away, with more of the experimental and minimalist sounds. But cruel tragedy struck Cave & his family near the completion of Tree, as his fifteen-year-old son Arthur died from an accidental cliff fall. The boy’s ghost hangs over a record that is a uniquely powerful expression of grief.

Not that Cave’s music was upbeat beforehand, but the power of his loss is unimaginably immense, yet still connecting. Opener “Jesus Alone” has the story-telling Nick Cave narrative, but feels more intimate from him than ever. “Rings of Saturn” goes stream-of-conversation descriptive, while “Girl In Amber” does elegy as only Nick Cave does, just more so. The record doesn’t feature as much of Cave’s usual character stories, understandably so (the lyrics, more than anything else on Tree, were altered by Cave after his son’s death). Instead Cave is often trying to find himself, such as with “Anthrocene”, amidst his powerful, aching loss (“I Need You”). There is a hint of ‘now with the angels’ acceptance on “Distant Sky”, but the record closes with the slow, aching titular goodbye.

Perhaps no record since David Bowie’s Blackstar (QRO review) earlier this year has mortality hang over it so resolutely (though only alike in kind, not form, to Bowie’s own pre-posthumous final release). And few artists were already so equipped to deliver intimate tragedy like Cave. Music that will be with you for life, however long or short that may be.