There is no one like Nick Cave – or Warren Ellis.... 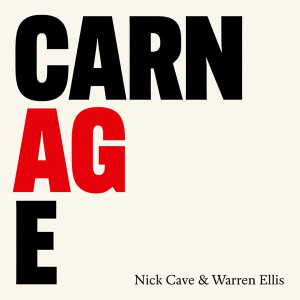 There is no one like Nick Cave – or Warren Ellis. Cave has been making modern auteur music since the late seventies, and since the mid-nineties he’s been doing it with Ellis, from the strings of Nick Cave & The Bad Seeds to the blues-rock of Grinderman, not to mention acclaimed film soundtrack work. Yet other than those soundtracks, the made-during-COVID surprise-released CARNAGE is their first official work together as duo, embracing Cave’s emotional highlights.

Being made during lockdown and dropping unannounced, one could easily think that CARNAGE is a COVID project, something that wouldn’t have been made without the current crisis, and could be put to the side once things are back to normal (whenever/whatever that will be). Billing it as “Nick Cave and Warren Ellis” could even heighten those suspicions, not a ‘true’ Cave record. But CARNAGE is another masterful work by two amazing musicians.