Nick Cesarz of Milwaukee’s Vinyl Theatre sat down to talk with QRO.... 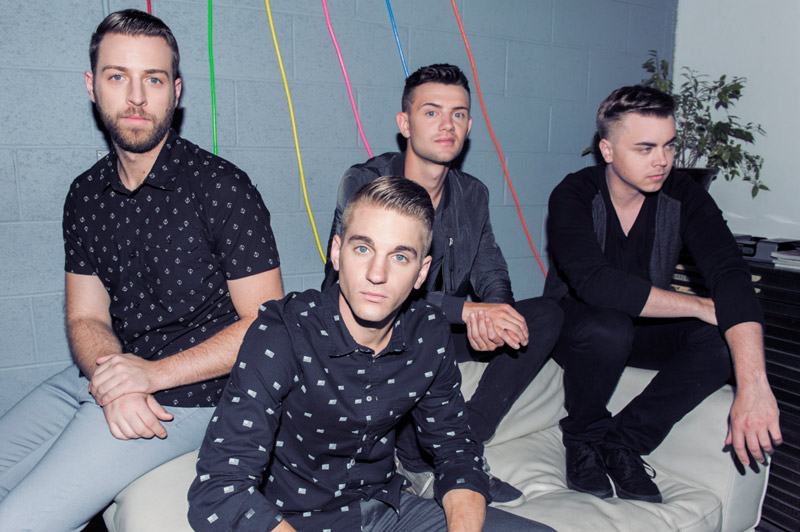 Nick Cesarz of Milwaukee’s Vinyl Theatre sat down to talk with QRO. In the conversation, the drummer talked about their debut album, Electrogram, the shows & albums that inspired the creation of the band, their hometown, winning an opening slot for twenty one pilots via a Battle of the Bands, and more…

QRO: When I saw you guys live on the ‘Silence is Violent’ tour, I was immediately taken by how energetic you guys were. Did you guys ever attend shows together before forming Vinyl Theatre?

Nick Cesarz: Thank you! We do try to have as much fun as possible on stage. We did go to a lot of shows before the band started and while I can’t be specific to which ones every guy went to, I know they had a great influence on us. I remember Chris [Senner, keys] and Keegan [Calmes, vocals/guitar] went to see The Killers together and they were talking about how great the show was for a week. We’re fortunate to live in a time when you can see live performances on the internet. They won’t replicate the experience of a concert in-person, but we have been inspired from other bands from watching videos online.

QRO: And would you say there was ever an instance where you’d see a live act and go, ‘Fuck, I want to do that!’ and apply it to the band?

NC: I had that feeling the first time we opened for twenty one pilots at Marquette University in Milwaukee. I had never seen a band do so much with their live performance. It was truly inspiring. After that show we had so much excitement at practice trying to incorporate new ideas for our live shows.

We’re fortunate to live in a time when you can see live performances on the internet. They won’t replicate the experience of a concert in-person, but we have been inspired from other bands from watching videos online.

QRO: One of the great aspects of the album is its anthemistic but it doesn’t feel pandering at all, it doesn’t come across as insincere. When recording the songs, what would you say you guys really wanted to get across overall?

NC: The album definitely has an uplifting vibe to me, personally. I think we wanted the album to have that feel to it, but we didn’t go into the writing process with that in mind. We just wrote songs as a reflection of our lives at the time. The song “Breaking up My Bones” has many meanings depending on interpretation, but one of them is dealing with the struggle to create something unique as an artist. When we were in the studio, we wanted to have the most unique sounds we could find and hopefully the intro is a testament to that.

QRO: I know that Hot Fuss by The Killers was a major moment for you guys (discovering that album) but where did you go from there after getting that spark of inspiration?

NC: Death Cab For Cutie’s Plans and Transatlanticism were big for me. Jason McGerr is a big influence on my drumming. As a band, I think there’s a ton of music that inspired us after Hot Fuss. I remember Chris coming over every day and showing me new bands on Alt Nation. Two Door Cinema Club was a big hit for us at practice. I think we even covered “What You Know” or at least learned it. On our tour with twenty one pilots, we played the hell out of Young The Giant’s Mind Over Matter (QRO review) and Bad Suns’ Language & Perspective. Those are two albums I hopefully will never get sick of.

Milwaukee is an interesting city to be band in.

QRO: Milwaukee is a city that many don’t know much about, at least throughout major cities here in the States. What was it like starting out there?

NC: Milwaukee is an interesting city to be band in. We started out playing with three or four other bands at all the local clubs. Our best shows were always at Shank Hall. That place is legendary. We always received great support from our fans and friends when we played there.

QRO: Once you stated touring outside of the city, how did that go and what would you say helped you guys win crowds over?

NC: We started playing in cities like Chicago and Minneapolis opening up for the bigger local bands. I remember we all thought, ‘They came to see the headliner, so let’s show them what we’re made of.’ That feeling really pushed us every night to play our best and show the crowd who we were.

QRO: This album… Mate, I can’t stress enough how refreshing it is. The energy in it especially, it sounds practically uncontained yet the production level is spot fucking on. How was it, harnessing that Vinyl Theatre sound in the studio?

NC: Thank you. We owe a lot of the engineering and production mastery to Joel Wanasek and Joe Wohlitz. They are incredibly talented and such hard workers. I think it’s getting easier and easier to harness the sound in the studio because we track all our songs in our demo studio prior hitting the recording studio. Aside from a few changes we make, the synths and keyboard parts are done when we get to the studio. Our songs are built for the live stage which makes it easier both in the studio and when we’re prepping for a tour.

QRO: Is there something you’re dying to try on the next album that you couldn’t do on the first?

NC: I’d like to get more experimental with electronic drums and other different percussion.

Our songs are built for the live stage which makes it easier both in the studio and when we’re prepping for a tour.

QRO: Reading about how you guys won the contest to support twenty one pilots was fucking brilliant. When it came to touring with those guys, what surprised you the most?

NC: Yeah, we played a ‘battle of the bands’ to win an opening spot for “a big national act coming through Milwaukee.” Having no idea who the band was, when we found out we had won and that it was them, we were ecstatic. I had Vessel in my car that entire year. When we signed with Fueled By Ramen and they informed us of the tour with them, we couldn’t believe it.

I was very surprised and happy at how they treated us as the opening act. It took a lot of stress off of all of us. Josh [Dun], Tyler [Joseph], and their entire crew really helped us through our first tour. Tyler and Josh even took time during our soundcheck to help us with some audio problems. I couldn’t have asked for a better first tour experience.

QRO: Is there any city or town that remains a challenge for you guys when it comes to touring?

NC: I’m sure we’re more well known in certain cities, but wherever we go, we will always put on the same show no matter what.

NC: We’re currently working out the details of a tour for 2015. We’re also always writing new music, but we won’t be back to the studio for a while. Thanks for the interview!