<img src="https://www.qromag.com/wp-content/uploads/2010/03/nicovegamar22.jpg" alt=" " />Nico Vega have the intensity and passion to immediately make an impact. ... 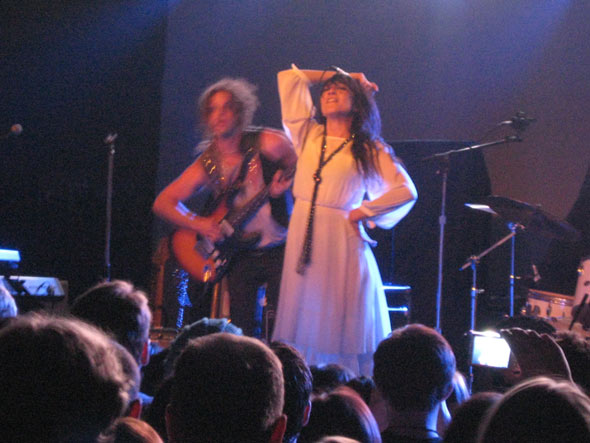 Click here for photos of Nico Vega at Izod Center in East Rutherford, NJ on March 8th, 2014 in the QRO Concert Photo Gallery

Click here for photos of Nico Vega at ACL Live in Austin, TX on September 29th, 2011 in the QRO Concert Photo Gallery

When you’re the first act of a three-band show (with Codeine Velvet Club and Metric) you’ve got a very short amount of time to grab the audience’s attention.  Nico Vega is one of those rare bands that can make a career out of being an opening act.  Not that they can’t headline (and should at some point), but they have the intensity and passion to immediately make an impact.  Let’s just say they come out with an explosion.

Touring behind their self-titled debut, Nico Vega played only five songs, but they surely left an impression on an audience that was primarily there to see Metric (QRO live review).  The three-piece band (Aja Volkman – vocals, Rich Koehler – guitar, Dan Epand – drums) kicked off their set with “Living Underground”.  This launched the band into about 45 minutes of nonstop energy.  Maybe playing in Portland felt like a sort of homecoming for Volkman (she is originally from Eugene, Oregon).  Maybe it was the addition of family members at the show that contributed to her performance.  Whatever it was, she exuded a sensual fierceness throughout the band’s set.  This was most notable during “So So Fresh” with her soft, breathy intro before careening into the chorus.  The interplay between Volkman and Koehler on stage simply added to the spectacle.

Nico Vega ended the night with “Beast”, with Volkman’s yelp and her exhortation of “come on people” whipping up the crowd.  Not only did they do their job as an opening act of warming up the audience, they certainly grabbed some Metric fans by the throats and made them Nico Vega fans.