There have been times where it hasn’t been easy for Nicole Atkins.... 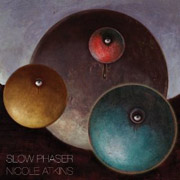 There have been times where it hasn’t been easy for Nicole Atkins.  The New Jersey native (so that’s tough, right there…) was a hot musical commodity at one point, but then debut Neptune City (QRO review) was delayed so Rick Rubin could mess with it, didn’t perform as hotly as expected, and Atkins was dropped from Columbia.  Then she went through a break-up with her boyfriend and had to move back home, but channeled that into indie release Mondo Amore (QRO review).  However, that record hewed perhaps too much towards the grand, maudlin songstress style that set Atkins apart from the usual Brooklyn hipster crowd.  But with Slow Phaser, crowd-funded via PledgeMusic, she puts it together much better.

Atkins is anything but shy on Phaser, from the bold open “Who Killed the Moonlight?” onward.  While there are other big songs, such as the following sing-along “It’s Only Chemistry”, best are the bump-n-grinders like “Girl You Look Amazing”.  But you get all sides of Atkins, including the wry “Cool People”, somber “We Wait Too Long”, blues woman “The Worst Hangover” (which is so old school she asks for an operator…) and “Sin Song”, to slow & sad with finish “Above As Below”.  She even has some electronics added (because everyone’s doing that these days…), better in “Cool”, not so much in “Gasoline Bride”.

After her bumpy road, one can only hope Nicole Atkins has reached a smoother stretch (she is returning on February 13th to Bowery Ballroom – QRO live review last time there – and QRO live review there the time before that), because she – and the music – deserve it.