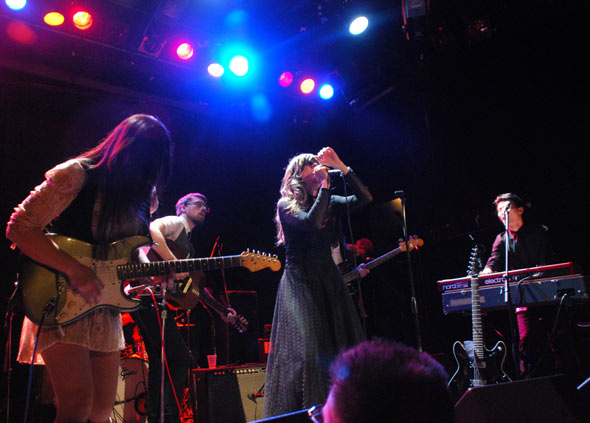 For indie acts these days, headlining New York’s Bowery Ballroom (QRO venue review) is basically ‘making it’.  The venue is large enough that you can’t sell it out just by begging your friends to come, even it you’re a local band with a lot of friends.  It’s also increasingly becoming known around the country & even the world, and is the namesake venue for Bowery Presents, who also handle Terminal 5 (QRO venue review) and Wellmont Theatre, either just a step below Madison Square Garden (QRO venue review).  But what if you’re headlining it again, three years after you were ‘supposed to’ break out and be the next belle of the music world?  For Nicole Atkins, her show at Bowery on Wednesday, February 9th was even more of a family affair than ever, celebrating the release of her new Mondo Amore (QRO review). 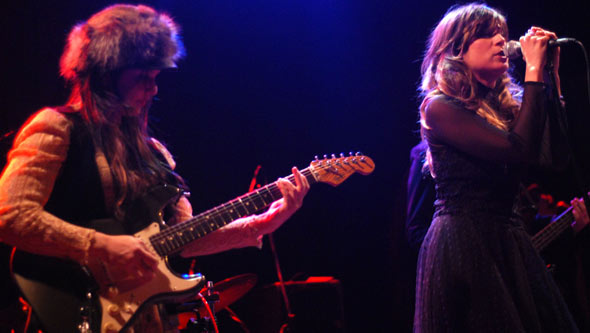 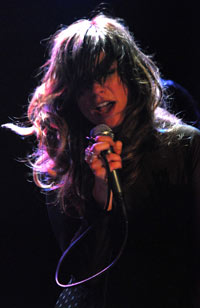 Just about three years ago, the New Jersey native celebrated the release of her debut, Neptune City (QRO review), at Bowery Ballroom (QRO live review).  Back then, it was the release that finally came, after she’d been hyped the year before, only to see the release delayed thanks to re-remixing by her major label’s then-new co-chairman, Rick Rubin.  Neptune failed to meet Columbia’s expectations, so Atkins was dropped, and also had to endure a break up with her boyfriend & living at home with her mother (in the town she’d named the record after).  So coming back to the Bowery for Mondo Amore (which itself had been delayed a week or two thanks to printing problems with the artwork) could have been a bit awkward, but instead Atkins thoroughly dominated the joint, playing all of Mondo, much of Neptune, and more on top of that. 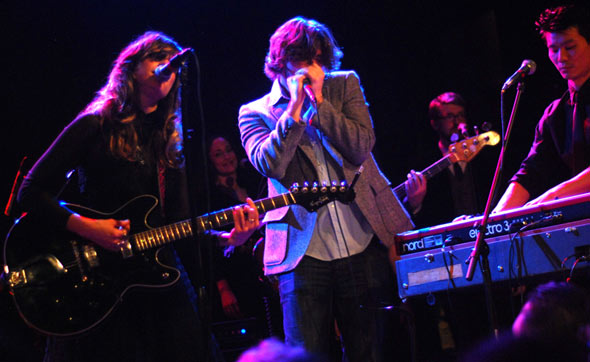 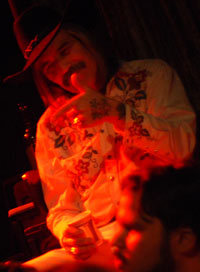 After opening with Mondo‘s “Heavy Boots”, Atkins & her Black Sea delivered three great City tracks, as if to burn down the demons and build a new Bowery with “Maybe Tonight”, “Brooklyn’s On Fire!”, and “The Way It Is”.  Still, it was a night for Mondo, big and bold with the dirty blues of “Cry Cry Cry” and “My Baby Don’t Lie”, the latter of which featured 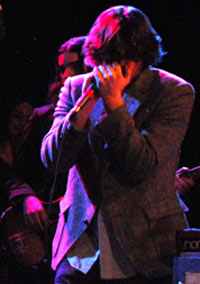 Johnny Hull of Jones Street Station (QRO spotlight on) on harmonica.  Also coming on stage before “My Baby” was “senior”, the fella featured on the cover of Mondo with Atkins, who managed not to cause too much trouble at the side of the front of the stage, sharing in the cheap wine.  The dirty soul continued with pieces like “You Were the Devil” and “You Come To Me”, but then Atkins flipped the script by going stripped (not literally) for her sad, soulful side.  “Hotel Plaster” was little more than Atkins on guitar, and the following “Monterrey Honey” (by writing partner Robert Harrison) was just Atkins & axe, but both pieces used every ounce of the Atkins diet for powerful evocation. 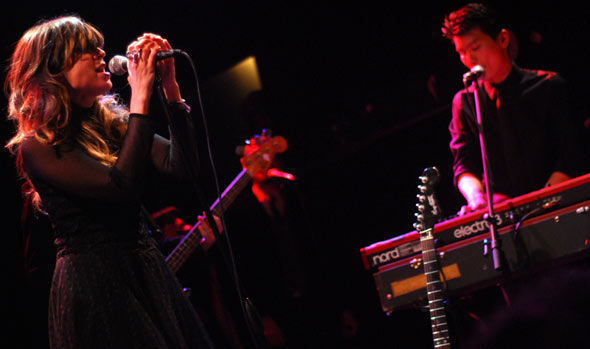 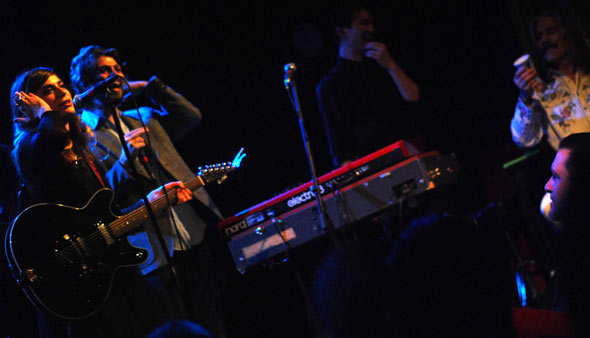 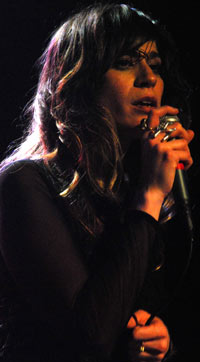 The shift in sound did make for a bit of a stop-start loss of momentum to the night, meaning Atkins & The Black Sea had to basically relight the dirty blues motor with “Vultures”, but then messed around with psychedelic krautrock by covering Can’s “Vitamin C”.  It was instead Neptune City to the rescue with “Party’s Over”, followed by Mondo‘s “War Is Hell” & “This Is For Love” to get bigger all over the place (along with 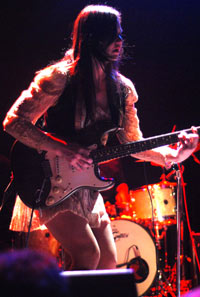 Atkins joking about her sister taking up all the bedrooms whenever they visit their mother’s place, plus the singer trying to get a super-fan up front named Paul to smile).  Atkins headed into the encore break with the dirtiest piece yet, a cover of “Oh Well” by Fleetwood Mac, and then Mondo‘s massive “The Tower”.  Of course, she wasn’t done with Bowery, and Bowery wasn’t done with her, so Atkins returned for one more cover, Marie Queenie Lyons’ “See and Don’t See”, before closing down the night with Neptune‘s title track – which she performed seated at the front lip of the stage. 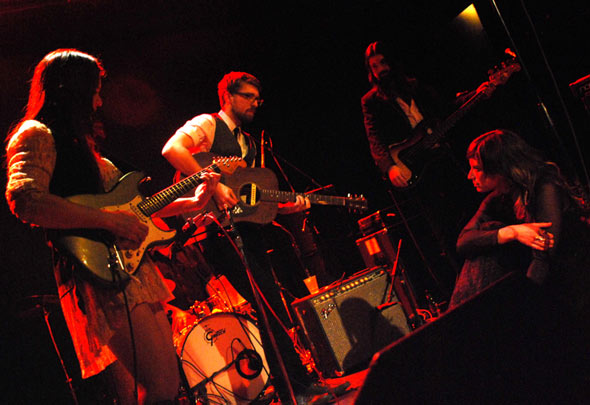 Nicole Atkins is hardly the first artist to play Bowery multiple times (how many times have the White Rabbits – QRO spotlight on – headlined it, including later this month?…), and it’s not exactly the worst thing in the world to still be packing them in at the ‘making it’ venue.  Plus, travails in love & labels might not get you back in People, but can get you interviewed by the Times.  And with all the Amore she got at Bowery Ballroom, Nicole Atkins is Mondo these days. 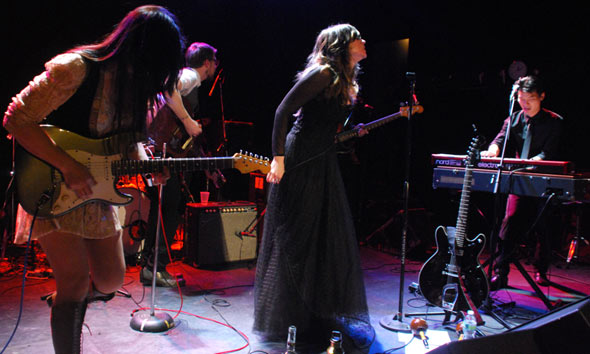