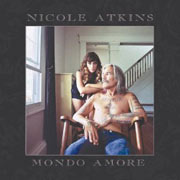 Though she now resides in (where else?) Brooklyn, singer Nicole Atkins original came from Neptune City, New Jersey, and hasn’t forgotten her roots, naming her 2007 debut full-length Neptune City (QRO review).  She also got her musical start on Manhattan’s Lower East Side, which, while it’s still home to all the Bowery area venues (including Piano’s – QRO venue review – where Atkins had a residency in her early days), actual indie artists haven’t called it home for years, ever since Interpol (QRO album review) broke and everyone, priced out of the market, moved to Williamsburg.  And Atkins was always more a fan of The Doors than Pavement (QRO live review) or Sebadoh (QRO live review), not as ‘alternative’ as some of the artists she’s traveled with (like A.C. Newman of The New Pornographers – QRO live review – who featured her vocals on his solo Get Guilty – QRO review).  But while Neptune City held up in its own right, Atkins could have maybe used some of that alt-approach on follow-up Mondo Amore, which suffers at times from being too grand, diva-lounge, maudlin.

Click here for photos of Nicole Atkins & The Black Sea at 2010 Musicfest in Clark, NJ in the QRO Photo Gallery

Click here for QRO’s review of Nicole Atkins & The Sea at Bowery Ballroom in New York, NY on January 25th, 2008

Newman wasn’t wrong in appreciating Atkins’ pipes, and they’re strong throughout Mondo, from the barroom belle over a grinding backbeat opener "Vultures" to the lounge-lost storyteller of "The Tower".  But too often, Atkins delves too deep into maudlin grandeur, big even in the moments where she’s small, dragging out songs like "Hotel Plaster", "Heavy Boots", and "The Tower", and adding slow moments when she shouldn’t have on "My Baby Don’t Lie" and "This Is For Love".  It also makes it harder for stronger styles like the croon of "War Is Hell", femme fatale air to the preceding "You Were the Devil", and speedier "You Come To Me" to stand out.

Nicole Atkins does balance her ways right in the early piece "Cry Cry Cry", with a bigger soul that’s upbeat despite it all.  And the diva-grandeur of Mondo Amore isn’t annoying or tired – it’s even likeable in its own way.  But Atkins gets a little lost in that voice of hers.