Trent Reznor & Atticus Ross are back with what may very well be one of the best and strongest Nine Inch Nails records yet.... 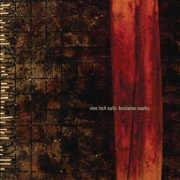 Trent Reznor has had a highly respectable career.  Many people thought that Nine Inch Nails was over back in 2009 when he embarked on “The Wave Goodbye Tour”, but as farewell tours tend to go in the music industry, it was – thankfully – not the last we heard of him.

Here we are, four years later, and despite having had his hand in many interesting projects in the time since 2009, Reznor and his partner in crime Atticus Ross are back with what may very well be one of the best and strongest Nine Inch Nails records yet.

Click here for photos of Nine Inch Nails at 2014 Primavera Sound in Barcelona, Spain in the QRO Concert Photo Gallery

As far as sound goes, clearly Reznor’s foray into the film-scoring world has carried over into his return to Nine Inch Nails.  Songs like “Copy of A” and “Various Methods of Escape” carry that same tense, tone-setting vibe that much of his work on The Social Network and The Girl With the Dragon Tattoo did.

This is quite possibly Nine Inch Nails’ most electronic album to date.  Actual instrumentation (not to take away from the talent Reznor and Ross clearly display with digital instrumentation) is still present in a few places, namely the album’s first single “Came Back Haunted”, which is heavy on the electric guitar and has some acoustic drums here and there.  Physical instrumentation is also present on the song “Everything,” which is probably the most upbeat-sounding Nine Inch Nails song ever, and is certainly most out-of-place-sounding song on this album.  That doesn’t make it a bad song.  Nay, it’s actually quite good and as absolutely crazy as it might sound, Trent Reznor has actually penned a song with a positive message.  Many of his diehard fans would say you can find positivity in many places within his portfolio, but this song is the most obvious with lines like, “I am home / I believe / I am home / I am free / I am home / I can see / Always here, finally.”

Hesitation Marks has been clearly connected, both by Reznor himself as well as members of the press, to Nine Inch Nails’ most famous album, 1994’s The Downward Spiral.  In many ways, one might call it a sequel.  It’s kind of cool to look at that album and see the extremely dark places Reznor was in and then compare it to this album, which is of course still fairly dark, but has a tinge of change and hope.  The most notable tie between the two albums is that Hesitation Marks sees the return of multimedia installation artist Russell Mills who designed the entire visual concept – most notably the album cover – for The Downward Spiral.  He had his work cut out for him this time around, as there were four different versions of the Hesitation Marks’ cover to correspond with its digital, CD, deluxe CD, and vinyl releases.

A high point on the album is with its two closing tracks.  Check out the 3:43 mark of “While I’m Still Here” where a saxophone kicks in.  Whether or not it’s real or digital is hard to tell, but it makes for a really interesting transition into the closing instrumental track “Black Noise”, which helps bring things back around to the familiar dark and stormy Nine Inch Nails territory we all know and love.

Trent Reznor is a busy man and he obviously strives for perfection.  Hesitation Marks isn’t a perfect album in and of itself, but it fits perfectly into where he is personally as well as where Nine Inch Nails is collectively.  What the future may hold for this band is anyone’s guess, but our 2009 selves should feel lucky that we got taste of what he has to offer under the Nine Inch Nails moniker at least once more.