<img src="http://www.qromag.com/wp-content/uploads/2008/07/noagejuly11.jpg" alt=" " />Things very nearly got out of control when No Age rocked an all-ages show at South Street Seaport. ...

The greatest virtue of South Street Seaport is that it is large, all-ages, outdoor venue that gets great bands to play for free on Fridays during the summer.  Of course, there can be too much of a good thing, and that came out a bit as well when No Age graced the stage.  Their energetic but distorted punk rock already appeals to a younger set, and that was only doubly the case at this free show during the summer, where the kids showed up early to get a front row seat.  That’s nothing unusual for Seaport – the same was true for the opening show this year, the anything-but-young Wire (QRO live review).  But it does invite the mosh pit, the crowd surfing, the barrier pushing, and more.

If anything, crowd surfing was the least objectionable element, even sweet and cute in its way.  With a large photo pit between the crowd and the stage, there was no ‘stage diving’, but rather people getting lifted up within the crowd.  And, unlike last year’s Battles show (QRO photos), the security was fairly okay with it (as long as the surfer didn’t surf/get dumped into the photo pit).  The mosh pit itself wasn’t even so bad – at least there was no one with a skateboard like at Battles (QRO photo).  The only real problem was that it created a wide space in the front-middle, just behind the group of young folks at the very front, pushing those people forward even more, right up against the barrier that divided them and the photo pit. 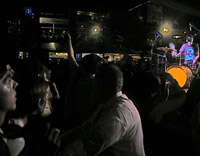 Thankfully for the photographers, not to mention Seaport Music Festival’s good name, security was there to hold the line (see right).  And not by bouncer-like ejections or rough-handling of fans, but by simply putting their strength and bodies into holding the barrier.  It did creep ever closer during the set, but held.  What’s more, the security folks were remarkably well tempered – better than you’d see at a lot of indoor venues (where there are, admittedly, fewer kids and more drunks).  They did get agitated at times, but kept it together despite some instigation by the crowd, especially near the end.  No Age still had to end things early, with no encore, and even come back on just to calm the kids down.

Luckily, the band was still on fine form (despite some guitar problems that forced them to request opener Abe Vigoda’s (QRO photos) singer/guitarist to retune one axe).  Playing mostly off of Nouns, they hit up the crowd with such tracks as “Here Should Be My Home” (probably the record’s best), as well as single “Eraser”, “Sleeper Hold”, “Teen Creeps”, and others.  And if they had to cut their set short at only thirty-five minutes, it was a chock-full thirty-five, with finisher “Ripped Knees” ending things on an exciting note (see video above).

No, it wasn’t quite the finest (half) hour ever at South Street Seaport (but that’s among some very fine hours…), but it was certainly a memorable one.  Hopefully, a few bad moments don’t put off other fans, River-to-River, Seaport Music, or the Seaport itself (or the security people), because even a little high-spiritedness by the kids can’t take down a great night.