No Doubt : Push and Shove

It's been a long ten years, but the brilliant late '90s ska band have finally returned. ... 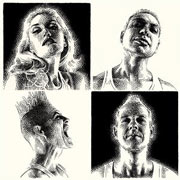 It’s been a long ten years, but the brilliant late ‘90s ska band have finally returned with a fantastic new album to boot!  This band have been considered to be the epitome of the late ‘90s to many who were youngsters at the time, with the classic singles such as “Hey Baby” and the unforgettable break up ballad “Don’t Speak” that will always bring the best rose tinted nostalgic memories of the past back, making you want to listen to their past hits all over again.  ‘90s fashion is already coming back into the limelight after being classed as vintage, so why not ‘90s music also?  No Doubt have fulfilled this area of ‘90s comebacks at any rate and as usual, Gwen Stefani is impeccable in her presence; pristine make-up, fun loving attitude and of course a voice that never fails to please.

The new comeback album Push and Shove comprises eleven mix and match tracks all reminiscent of the band’s previous style, which is definitely a good thing.  However, they certainly show their talent in being able to sustain the original template that so many grew to love over the years, whilst simultaneously showing that they can still be current enough to be placed within the charts.

The first track of the album, “Settle Down”, is a brilliant starter that was released as a single back in July.  The opening of the track provides the tease needed for past fans to build up that sense of anxiety whenever a favourite band brings out a new album, and as soon as the singing starts, you know that it’s going to be a corker of a track.  With catchy lyrics and a weirdly comforting chorus the album starts with a bang and certainly doesn’t fail to please.

Admittedly, a few songs from the record do need a couple of listens to before they begin to grow on you as you continuously switch from upbeat to slow throughout its entirety, but once they do you’ll realise that they were worth the wait and effort.  The jumps between the various nature of the songs may be disarming when you listen to the album in full for the first time, going from upbeat songs such as “Looking Hot” and “Undercover” to “Undone”, which is a beautiful acoustic song that really shows Stefani’s versatility, a song that is reminiscent of “Don’t Speak” in the theme of romance and heartbreak.  However, this is where the numerous spins of the album are needed, as when you do the similarity between the songs that tie them together become apparent.  No Doubt are back and they’re on form as per!

The Vaccines : Come of Age