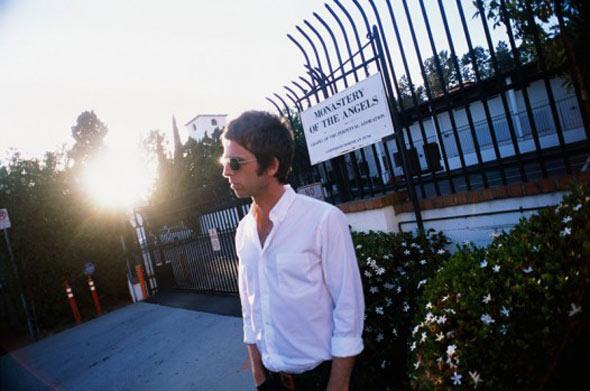 Noel Gallagher’s High-Flying Birds touched down in Toronto’s historic Massey Hall on Monday, November 7th for the first of just ten North American appearances in support of the band’s self-titled debut release.  The 117-year-old theater proved to be an ideal setting for Gallagher, whose passionate and pitch-perfect vocals benefited from the spectacular acoustics, bringing the capacity crowd of 2,700 passionate Noel apostles to their feet on the main floor, balcony, and third-level gallery.

Gallagher took the stage dressed simply in a blue button-downed shirt and grey jeans.  For the duration of the 90-minute performance, Gallagher stood rooted to the spot, as still as an animatronic Chuck E. Cheese character, a far cry from Noel’s stage-prancing brother and former Oasis partner, Liam.  But when Noel opened his mouth, his haunting delivery was enough to raise goose bumps as he guided the audience through his solo repertoire, as well as a handful of favorites from the Oasis canon.

After opening with a pair of familiar Oasis tracks ("To be Free" and "Mucky Fingers"), Gallagher soared into High-Flying Birds territory with an anthemistic "Everybody’s On the Run".  "If I Had a Gun", the first U.K. album single, was met by a lusty response from the crowd, which clearly has already accepted the song as a modern classic.  The jangly "The Death of You and Me" traded in its brassy marching-band swagger for a pounding keyboard bridge, courtesy of keyboardist Mike Rowe, who proved to be one of the shining stars of the evening.

Gallagher went back to the Oasis standards with gorgeous acoustic performances of "Wonderwall" (again, nicely accentuated by Rowe’s keyboards in the closing notes) and "Supersonic", delivering two of Oasis’ signature tracks bathed in otherworldly soft aqua-blue lighting.  From there, Gallagher took the time machine back to the present day, closing out with a half-dozen tracks from the new album, including the absurdly catchy "AKA … What a Life!", a frenetic, Radiohead-esque cautionary tale on the perils of dream-chasing.

The first three videos from this album ("If I Had a Gun", "The Death of You and Me", and "AKA … What a Life!") create a video trilogy revolving around life-changing decisions, new beginnings, and potentially dangerous consequences of those decisions; in short, a fitting metaphor for Noel’s decision to leave the comfort zone of Oasis and set out on his own path.

As an encore, Gallagher again mined the rich trove of Oasis classics, bringing the house down with "Little By Little", which saw the sound of the audience participation nearly drown out Noel’s vocals, followed by "The Importance of Being Idle".  By the time he closed with a sublime "Don’t Look Back In Anger", Massey Hall was swooning in the emotional fervor of a religious tent revival.  Gallagher has entered a bold, exciting new phase of his career, and his fans are coming along for the ride.

(It’s Good) To Be Free
Mucky Fingers
Everybody’s on the Run
Dream On
If I Had a Gun…
The Good Rebel
The Death of You and Me
Freaky Teeth
Wonderwall
Supersonic
(I Wanna Live in a Dream in My) Record Machine
AKA…  What a Life!
Talk Tonight
Soldier Boys and Jesus Freaks
AKA…  Broken Arrow
Half The World Away
(Stranded On) The Wrong Beach