When Palais Theatre is sold out it generally follows that an amazing night will take place; when the sold out show boasts Noel Gallagher and his new quartet, High... 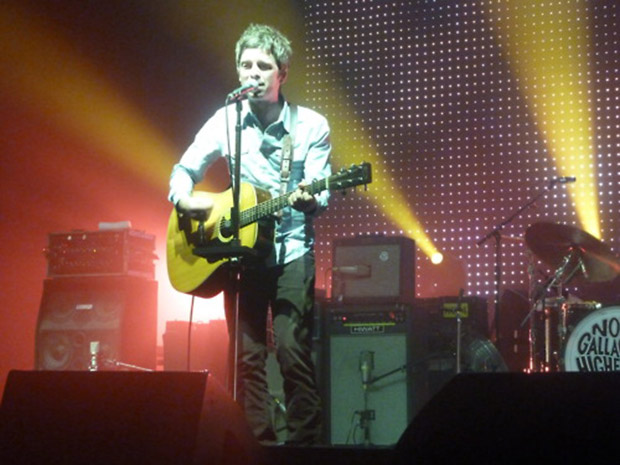 Click here for photos of Noel Gallagher’s High-Flying Birds at 2018 Tramlines in Sheffield, U.K. in the QRO Concert Photo Gallery

Click here for photos of Noel Gallagher’s High-Flying Birds at Webster Hall in New York, NY on May 7th, 2015 in the QRO Concert Photo Gallery

Click here for QRO’s review of Noel Gallagher’s High-Flying Birds at Massey Hall in Toronto, ON, Canada on November 7th, 2011

When Melbourne’s iconic Palais Theatre is sold out it generally follows that an amazing night will take place.  Moreover, when the sold out show boasts NoelGallagher and his new quartet, High Flying Birds, that aforementioned fact is almost a certainty.  Having just played the Melbourne Big Day Out two days earlier,the group were impressively unfatigued as they took to the stage on Tuesday, January 31st.  They generously opened with two Oasis numbers: the b-side “(It’s Good) to Be Free” and the garage-esque “Mucky Fingers” from Heathen Chemistry (2005).  Gallagher played these songs with genuine enthusiasm and nostalgic affection, with no sign of Oasis-exhaustion.  By this point, the diverse array of fans – men and women of all ages, geezers, dudes, hipsters and two professional footballers who shall remain unnamed – were utterly seduced by the sheer magnetism of Gallagher the rock geezer-god.

The band dived confidently into new material from their self-titled debut (QRO review), delivering in album-order the opening trio, “Everybody’s On the Run”, “Dream On” and the tender “If I Had a Gun”.  This solid, tightly wrapped parcel highlighted how well the dense sound of the High Flying Birds record has been translated into live language.  Gallagher, in that particularly British humour of his, wryly noted this achievement: “They [the band] have been rehearsing since last June and they’ve only started playing consistently well since about ten to ten tonight.”  After confidently performing a High Flying Birds b-side, “The Good Rebel”, and the honky-tonk “The Death of You and Me”, the show made a diminuendo into the most memorable section of the night.

Guitarist David McDonnell and bassist Russell Pritchard departed and left Gallagher to be accompanied sparsely by Jeremy Stacey on drums and Mikey Row on keys.  The Oasis-hunger in the audience was palpable as the Britpop deity strapped on an acoustic guitar.  Aware of this, the 44-year-old playfully took his time.  This brief, yet remarkable section contained the anthemistic “Whatever” and an acoustic rendition of “Supersonic” – a reward for die-hard, old school fans from the ‘90s who could remember the pre-Britpop hype of Definitely Maybe.  Bar the closing song, this couplet was where the show peaked.  The varied cross section of fans that sung in chorale was a testament to the timeless quality of these rock classics.  Such treats prompted a vocal barrage of requests, which were rightly dismissed; he retorted to an insistent fan in the front row: “I’m not doing requests.  I had to work on this set list for twenty minutes last June and here you are yelling out random shit.”  The essence of the night was embodied in that very moment; namely, the often-brash crowd were undeservedly treated to Gallagher at his best.

After the acoustic set, the band regathered its starting formation and flew into the catchier, poppier High Flying Birds tracks.  The most notable of these was “AKA… What a Life!”, which Gallagher warned in a preamble that, “This particular version of this song…is going to be fucking brilliant, the best ever.”  Other stellar tracks to close the set were the walloping “Soldier Boys and Jesus Freaks”, performed with relentless metronomic precision, and the theme tune-ish, but somehow moving, “Half The World Away”, of which the classic Noel hooks were even more enthralling live.  After a standing ovation (though the crowd had been standing the whole night), the group encored with three vintage samples from the Oasis cellar, all of which were originally sung by Noel, as opposed to his younger brother, Liam.  “Little by Little”, with its huge chorus and lovely round tone would have undoubtedly been heard through the theatre walls and onto the St. Kilda Esplanade.  The grandeur and gusto were not over here, being elevated even further by “The Importance of Being Idle”.  Finally, Gallagher and his ensemble closed with “Don’t Look Back In Anger”, which of course no one would.  Arguably one of the greatest Oasis songs, the crowd accordingly roared, “And so / Sally can wait / She knows it’s too late / As we’re walking on by,” beyond decibel belief.  The show was a perfect balance of old and new, the latter of which confirmed how relevant this song-writing genius still is today.