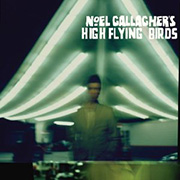 It’s clear that Noel Gallagher comprised most of the talent Oasis possessed.  The set of songs comprising his solo debut Noel Gallagher’s High Flying Birds presents a Noel Gallagher who feels more at home when he has sole creative control.  Sure, it sounds just as much like the Brit Pop everyone grew to know and love from Oasis over the years, but he is in his element to the point where – as blasphemous as it sounds – it almost sounds like the music Oasis always had the potential to make but never quite did.

It seemed as though when Oasis broke up that Noel’s brother Liam and other former members of Oasis rushed to release their debut album under the Beady Eye moniker.  It also seemed like it took an eternity for Noel to craft his response.  But High Flying Birds was worth the wait.  It sounds like he took his time and didn’t just release an album that he knew would sell because he’s "that guy from Oasis," like Beady Eye’s Different Gear, Still Speeding felt like.

Things are definitely done on a grand scale with this album.  The album’s opener "Everybody’s On the Run" packs a large punch with its choir-backed wall of sound feel, and even though the title is a tad disturbing, lead single "If I Had a Gun" couldn’t get more catchy if Noel had been being paid to write an advertisement jingle.

The rest of the album is made up of equally catchy hooks and lots of booty-shaking tambourines, things like that.  It’s exactly what listeners would expect from a Gallagher brother but at the same time also as satisfying as expected.  One song that embodies this catchiness is "Soldier Boys and Jesus Freaks", which even commissions a horn section.

The only complaint regarding this album is that at times Gallagher does run the risk of relying a little too heavily on the old Oasis sound he is responsible for creating.  This is best evidenced on the song "AKA… Broken Arrow", which is a mixture of "Wonderwall" and "Roll With It" (both from 1995’s (What’s the Story) Morning Glory?) with a little bit of "Be Here Now" (from 1997’s album of the same name) thrown in.

One particularly noteworthy song is "The Death of You and Me".  This is the embodiment of a solo Noel Gallagher both musically and lyrically.  Words like "Let’s run away to sea / Forever we’d be free / Free to spend our whole lives running / From people who would be / The death of you and me / ‘Cause I can feel the storm clouds coming," makes it obvious that he is both singing to his brother and their lives past as well as to his newfound self and the journey of self-discovery he has now embarked on.  It’s almost as though he’s waiting for something to come along and crash his party at any moment.  Hopefully that doesn’t happen so the listening public can see where he goes next.

Future of the Left : Polymers Are Forever EP