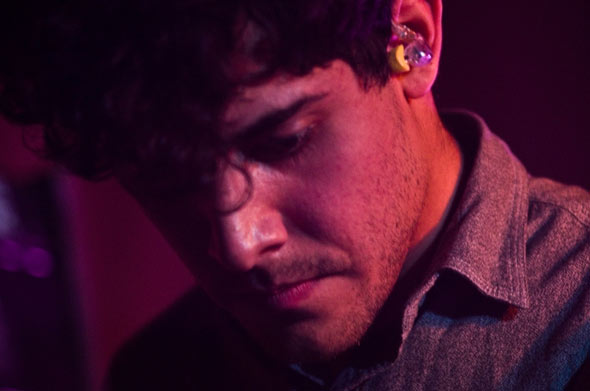 Click here for photos of Neon Indian at Doug Fir Lounge in Portland, OR on October 2rd, 2011 in the QRO Concert Photo Gallery

Click here for photos of Neon Indian at 2011 Governors Ball on Governors Island in New York, NY in the QRO Concert Photo Gallery

Click here for photos of Neon Indian at Studio at Webster Hall in New York, NY on August 16th, 2010 in the QRO Concert Photo Gallery

Click here for photos of Neon Indian on Governors Island on August 14th, 2010 in the QRO Concert Photo Gallery

Click here for photos of Neon Indian at 2010 Pitchfork Music Festival in Chicago, IL in the QRO Concert Photo Gallery

The best thing about college wasn’t watching presidential debates with a drink in hand or even receiving a diploma.  College expands musical horizons.  Whether it was on college radio or a DIY show in the frat basement, people discover new artists everyday while at college.  College is all about experimentation and music is no exception.

On a Wednesday, November 2nd at Hofstra University, the folks at Noisey and VICE, in conjunction with Dell and Intel (the reason why the tour was free to students) hosted two incredible artists that embody everything an artist should be – ahead of the curve, unique and talented.

Meet Kreayshawn.  She’s a very thin five foot something that, once on stage, looks like she can hold her own in a fight.  She’s energetic and full of life on her own, and with the help of her "sister" V-Nasty, put on a show so energetic that the crowd ransacked the front barricade.  The White Girl Mob performed such singles as "Bumpin’ Bumpin’" and MTV VMA-nominated "Gucci Gucci", which, after seeing the surge of energy put behind the performance, should have won.  Following the performance, she invited the crowd to jump the barricade and hug her on-stage.

Immediately following the Kreayshawn set, Neon Indian took the stage.  Alan Palomo and his company of synth-pop musicians came out to strobe lights, purple and blue lights – revealing a somewhat mysterious setting for the group.  They kept the volume at eleven the whole time, playing many of the hits from Era Extrana and Psychic Chasms.  The entire crowd gallivanted through the songs, proving that Neon Indian is a good time for every music fan.

Although the Noisey U tour has come to a close, be on the look out for these two great musicians.