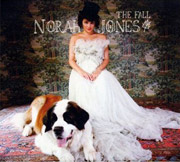 The sounds of Norah Jones’ recent album The Fall are not quite as consistent as her last three albums, which drew so many hearts to her gracious jazz and folk-like harmonies.  In fact, The Fall strays away from romantic ballads and reflects on the artist’s recent personal and artistic transitions.  Unlike her usual jazz tunes, the album explores alternative rock sounds and personal subjects in a very indiscreet way, but with charming and mature taste.

The album opens with “Chasing Pirates”, a song with rapid rhythms, and guitar and percussion-heavy sounds.  Interestingly enough, most of the album consists of guitar rather than Jones’ usual piano melodies.   Most of the tracks touch upon her recent breakup with long-term boyfriend Lee Alexander.  The second track “Even Though”, which was co-written with Jess Harris, reflects on a romantic stir up that ends in departure.   “Light as a Feather” details a struggling couple.  The song consists of melancholy like melodies, subtle percussion and strong guitar riffs.

Jones’ emotional and saddened vocals are exactly what the album needed.  “Back to Manhattan” is a reflective and confessional song, depicting a couple broken up and separated by a river.  Bringing forth a much more relatable Jones, unlike her previous romantic arrangements, which many times revolved around blind-optimism.  Then there’s “Stuck”, which was co-written with rocker Will Sheff (QRO photos – of Okkervil River), a beautiful song about a complicated deranged relationship.   Many of the songs display not only Jones’ change in style musically, but her changes in life and where she is today.  This is all evident from her once lively and languid vocals to her now more soft-breathed vocals and clanging guitar sounds, loop reverbs and electronic beats all resulting in a darker yet more developed album.

The Fall can be described as a more cautious, more complete and more transformed album.  The album touches on vulnerability and recovery.  Welcome to the new Norah Jones.