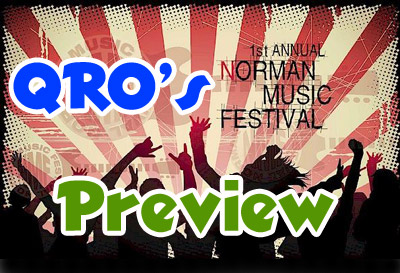 The afternoon at the West Stage is dedicated to local indie-rock acts, starting at noon with Norman’s own indietronic Dorian Small, followed, on the hour, by Norman’s high orchestral Umbrellas and garage-rock Neighborhood, and Stillwater’s lo-fi dance Colourmusic.  It’s all topped off by the best OK act since The Flaming Lips, Evangelicals (QRO live review).  Expect much craziness as Evangelicals rock their hometown with tracks off their latest, The Evening Descends (QRO review).

Austin’s post-rock Octopus Project (QRO photos) is blowing up, and that doesn’t come as a surprise – Where else are you gonna see someone play the Theremin (in a ball gown, no less!).  Their driving instrumental, experimental rock plays well in the outdoors.  Hopefully it won’t be too hot for their suits & ties…

But this ain’t just no mid-South jamboree, as British Sea Power (QRO interview) crosses the waves and makes a landing in the center of America.  In the midst of a coast-to-coast tour of the States on the back of the awesomely-titled Do You Like Rock Music? (QRO review), this’ll be the only chance North Americans will have to see them wave the flag outdoors.

The granddaddies of the Norman music scene, esoteric glam-rockers Chainsaw Kittens reunite – ‘cause it wouldn’t be a Norman Music Festival without them.  Other than a piece on the soundtrack to 2007’s Ashley Judd horror movie Bug, they haven’t released anything since 2000.  Watch these boys teach the youngin’s how it’s done.

For their first headliner, Norman went big – ‘cause there’s no band out there on the alternative music scene with more members than Dallas’ own alt-choir, The Polyphonic Spree.  Expect them to not just fill the stage, but the festival, with their unique sound.  While great on their latest, The Fragile Army (QRO review), The Spree are most definitely a band best experienced live – and outside… 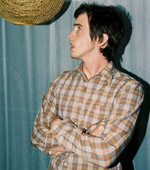 Because no festival is complete without a Brooklyn band…  The borough boys may not hail from Wyoming, but their indie-rock definitely has a certain Western tinge to it.

Don’t worry that Norman’s gone all trendy in their sound – college town it may be, but it’s still located in the heart of the Mid-West.  Oklahoma’s country-western rock ‘n’ roll takes over with Sooner heroes Starkweather Boys, John Arnold Band, and Taddy Porter.

“The best band in Austin” is quite an acclaim, and this latin-funk orchestra lives up to ‘The Live Music Capital of the World’.  Whether rocking PBS’ Austin City Limits (QRO’s Indie on Late Night TV), serving as the backing band to the one-and-only Prince, or lending their horn section to hometown buds Spoon (QRO photos), this eleven-piece delivers.

Sooner Theatre lives up to its name with a bevy of Oklahoma acts, starting with the students of McMichael School of Music, then the reunion of The Wickers, Norman’s pop/rock Refuje and surf-guitar Terry “Buffalo” Ware and the Shambles, another reunion in Chickasha’s art-punk Debris, Norman’s hardcore punk Gravity Propulsion Systems and pop princess Citizen 5, and finishing with Tulsa’s relaxed electro-reggae, Born a Number (featuring Malan Darras).