Brooklyn’s been a mega-force in music for so many years now it’s hard to remember when it was ‘that outer borough’. In 2010 L Magazine started the Northside Festival in Williamsburg & Brooklyn, to celebrate acts from the area and bring in acts to the area. It’s more-or-less beefed up every year since then, and though it still had to live in the shadow of the prior weekend’s Governors Ball on nearby Randall’s Island (QRO recap), the festival brought the sounds to the north side of Brooklyn, Thursday to Sunday, June 12th to 15th: 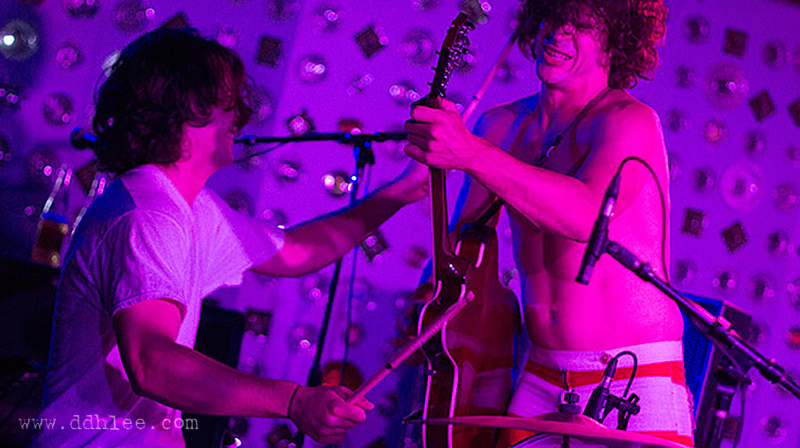 Before you ask, neither member of this two-piece is named Winston, resemble the Ghostbuster, or even sound like they chain smoke. Their music recalls a day when rock and roll was more rockabilly, with the influence of soul and blues. Guitarist Luke Nutting reflected this by moving between his guitar like Chuck Berry in his heyday (or five years ago, even).   Luke stamped, shrugged off the top of his flag suit, and lay on the floor and finally went into a guitar-drum fight with drummer Ben Wilkes. 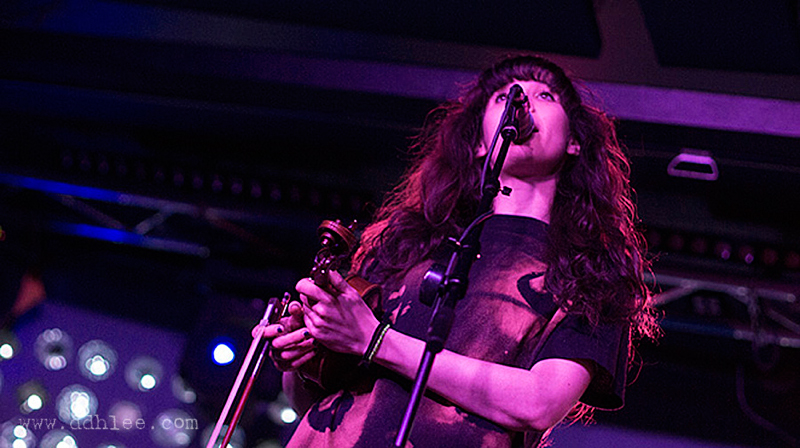 I’ll admit, it was the electric clarinet that drew me initially, but the oddly acoustic-but-electric sound of Friend Roulette has its charms in understanding twin tone vocals to trip out the psychedelic nature of their material. It shares the ability to make a landscape of sound with calm ferocity like Tiers, but in an entirely different approach to make it work. And you know what? It does. 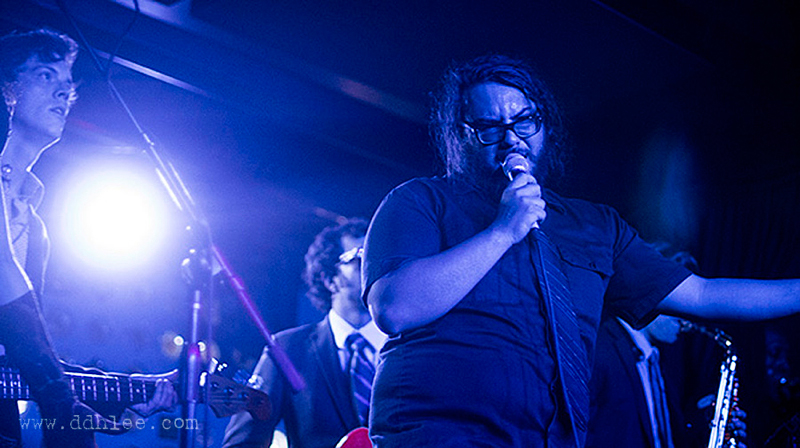 If Winstons tried to bring back the rough glory of rock and roll, The Love Supreme brought back the grandiosity of soul. With a lead who is one cape short of being possessed by James Brown, a sax, trombone, female vocalist, guitarist, pianist, and bassist, you have… a really crowded stage, but one that has all the fittings of a dance-happy gospel soul band that everyone could get into.

And they did. This was probably the most crowded I had seen Baby’s All Right (QRO venue review) all day for an afternoon, and it was filled with people dancing, including one half of MiniBoone (see below) and a man in white bell bottoms whom I mistook for the lead singer when he jumped on the stage and announced the band with a vocal approach of someone who was probably the fifth Beatle of their group. 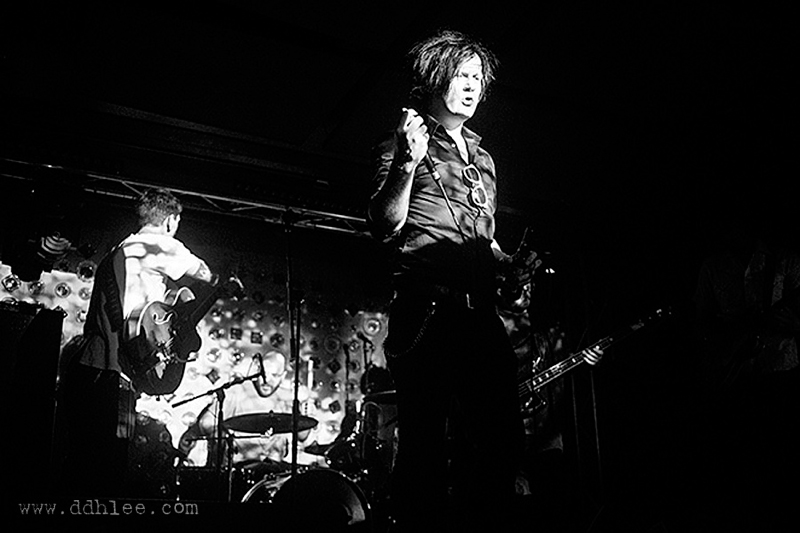 Their set wasn’t too different from before. I’ll be honest here and say that I did not expect to catch Clouder, but I apparently did because changes happened between the schedules. I will say that the music was still good – even better actually, now that I could hear them play on some louder speakers.

To quote lead singer Eric Gilstrap, “This is what I’d call morning,” referring to their 5pm show. To be fair, I would be too after last night’s gig. 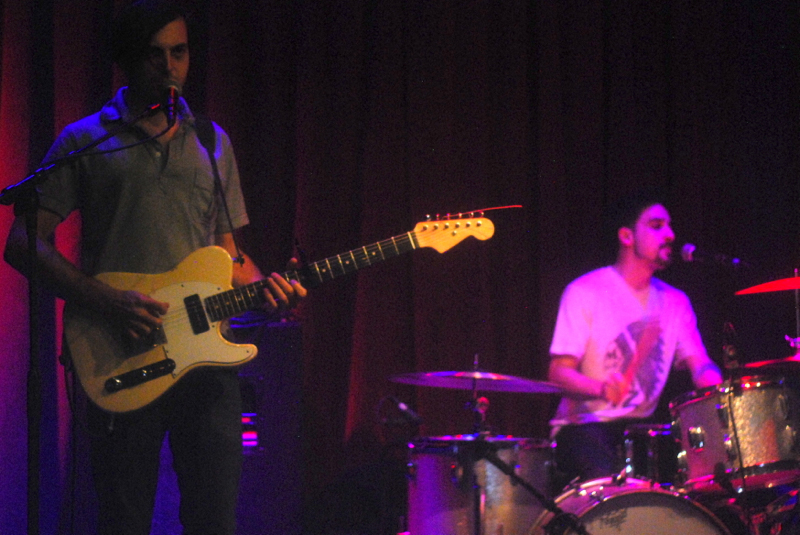 Two staples for QRO at Northside are Courtesy Tier and Spike Hill (QRO venue review). Courtesy Tier played a pretty regular set for this long-time CT fan, at their second Rocker Stalker Northside showcase. Still love them opening with that guitar riff from “Hold”; indeed, there are a lot of riffing moments (where singer/guitarist Omer Leibovitz looks down at his guitar and isn’t even singing). One could actually see them playing country and even jam festivals (note: that’s meant as a compliment). 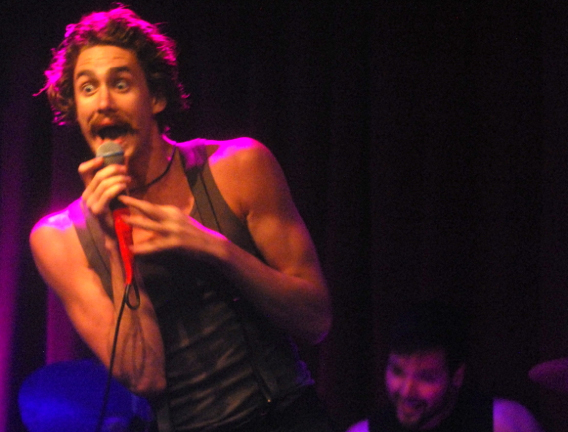 There was a lot of equipment, a lot of songs, and a lot of wild from The Venetia Fair. Reminiscent of Gogol Bordello (QRO live review), and not just the mustache, though TVF are less actual gypsy. 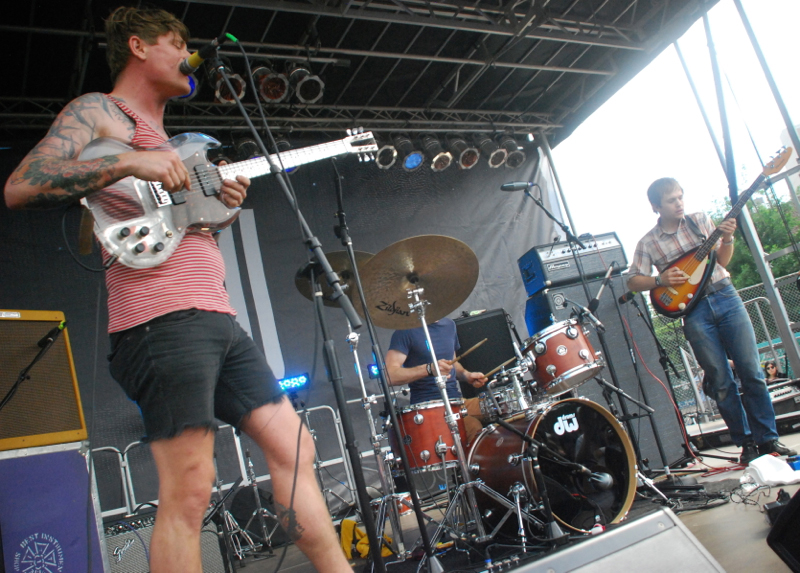 For the first of two days of free music at McCarren Park (note: not McCarren Park Pool – QRO venue review), Northside brought The O.C’s Thee Oh Sees. Actually a ‘free RSVP’ show, there were lines to get in, even for press/VIP (though that may have been due to confusion as much as anything else). Your correspondent got to the location before the band started, but only made it inside during their third song.

Luckily for him, security was far more concerned with keeping the barrier up and didn’t enforce the usual ‘first three songs’ photo pit limit. The pit barrier held up, as things did simmer down later in the set, as the band got slower/more psych. 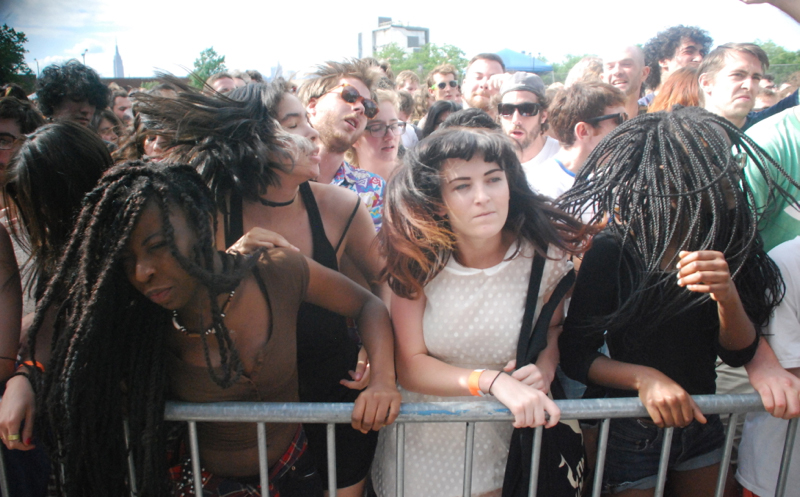 I think of Matchless (QRO venue review) as the Mercury Lounge (QRO venue review) of Brooklyn: it’s big enough to have some establishment, and it has a decent sound setup, but the lighting and lack of room makes for a bit of a difficult show. It doesn’t change the fact that Hearts Bleed Radio had some pretty sweet set lists for their second day showcase and there were people not afraid to check it out despite everyone mentioning Thee Oh Sees while I was there. 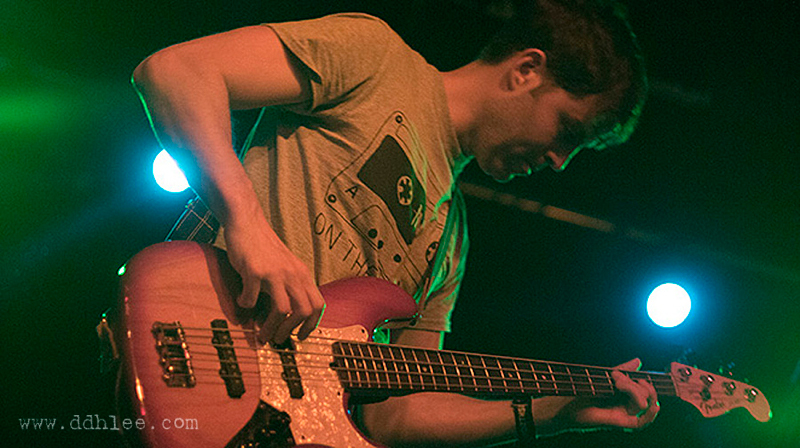 I’ve caught The Planes before quite a few times, and I’ve always enjoyed them for being summery garage rock with easy hooks to listen. I can’t say much more because not much has changed, and I don’t think that’s a bad thing; like so many other bands that hail from singer/songwriter Stephen Perry’s state of MA, it thrives on being light and fun for the sake of being light and fun, and that’s all the more reason to appreciate it. 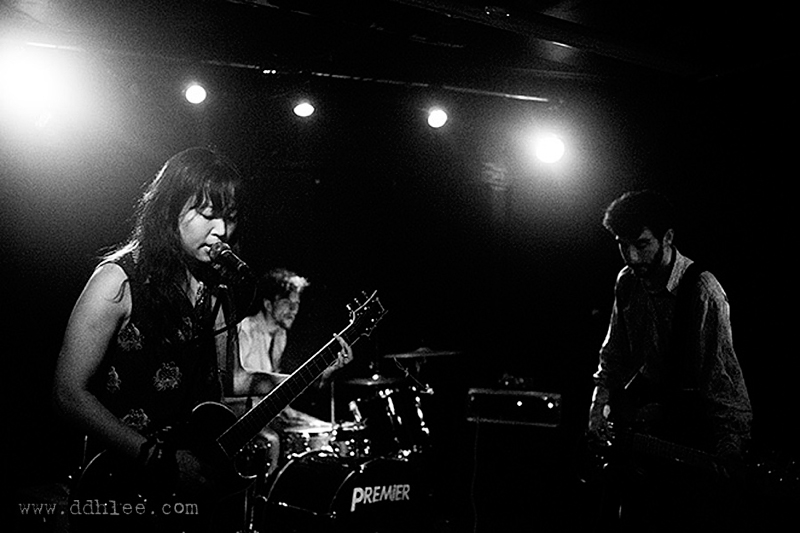 Still drunk from playing at Jameson (interpret it how you like, these were the words out of guitarist Leslie Hong), Haybaby played a set with this sultry emo grunge vibe to it, calm and anguished and beautiful for its bitterness and fast enough to force the drummer’s shirt off.

The Meaning of Life 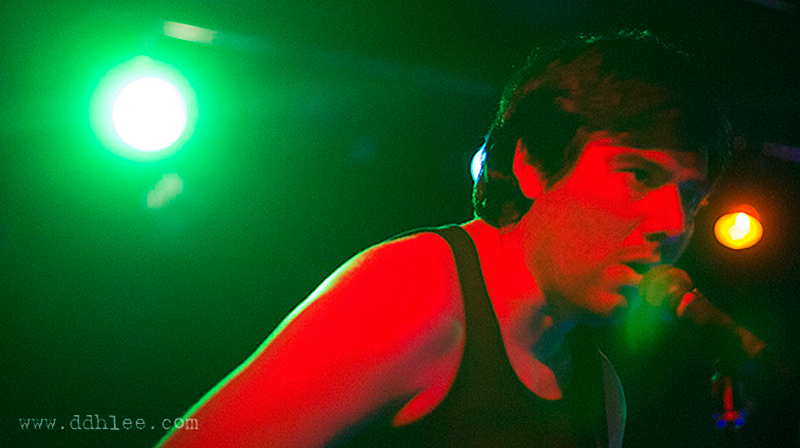 Psychedelic shoegaze that feels postpunk in influence with vocals that harbor a dream pop sensibility. Highlights from The Meaning of Life included a cover of “Like a Virgin” that took the song and made it more… suggestive (again, interpret it how you like). 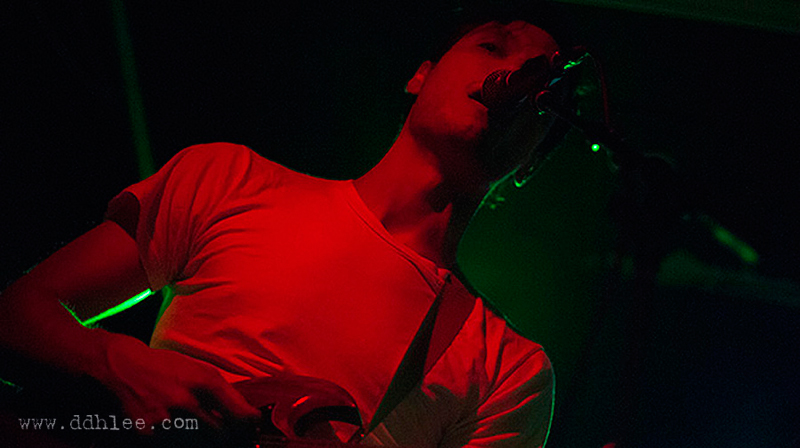 With a return to garage sound, Old Monk took the set with the rough cut of garage sounds, a summery flavor, and a bit of a pop mentality to it. Jangly hooks combined with some unique work out of their pedals filled out the band in a very productive way. 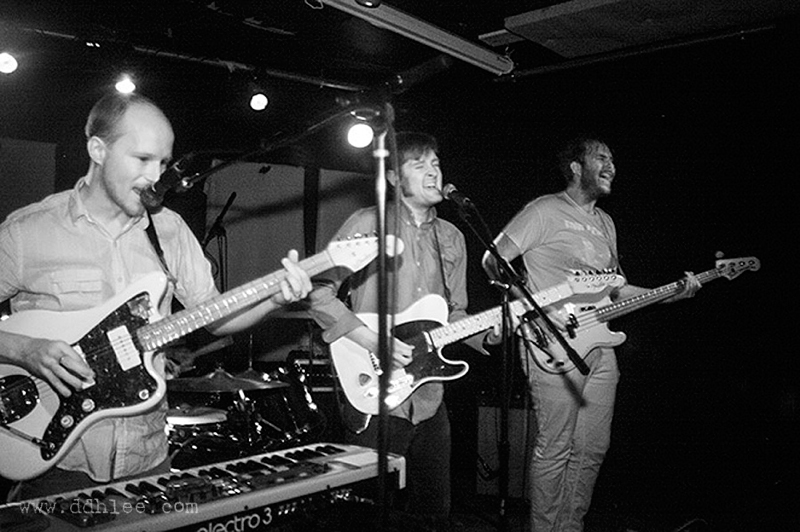 You’ve heard it before, you’ll hear it now: it ain’t Northside without MiniBoone. In the time that has passed, the band has lived up to its first EP Big Changes (QRO review) by doing just that: not only has it seen a few changes in member rotation and a different record label, but the sound has started to move away from its power pop roots to something more soulful and more… adult, I suppose you could say? With a third album in the works, it has made their usual heavy rotation in Northside slow down to just this one along with plenty of new material released.   The theme of the album: growing older. Some things never change after all.

It seemed like practice may have taken its toll, as the energy did not seem there at first. Was it anticipation from new music, adjusting to band changes, or just plain exhaustion? Regardless, it took a few songs in before they got things rolling proper and we saw the MiniBoone that we know and love; Doug Schrashun dueling guitars with new member/super-fan Drew St. Aubin, Craig Barnes bobbing up and down, and Anthony Aquilino working the drums. A number of familiar faces littered the audience: participants of their latest music video, “I Could I Could” (QRO mp3 review).

For some reason, it slipped past me that they were playing the Hearts Bleed lineup and I ended up catching some of their show this time. No photos this time, I will only say that they received proper coverage from other people there, with Eric utilizing that round mini-stage thing to confront the fans that came to catch them go Roadhouse on the crowd. 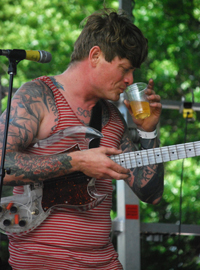 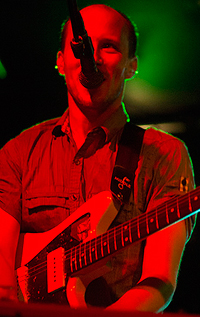 -Northside sponsor Jameson was giving two free drinks in the ‘regular’ VIP (and also in attendance was their barrel expert) – but security was so concerned with holding up the pit barrier that they didn’t stop your correspondent from going backstage where there was unlimited free beer & Jameson.

-Clouder started up right as it hit Barnes’ birthday. Photographer, baker, and spouse of the band member Marielle Solan (and occasional QRO photographer – QRO photos) offered coconut brownies to celebrate. Clouder appreciated the gesture on mic before they repaid it with their usual stage shenanigans.

-While Donald was able to make it to MiniBoone, Ted took a nap after Thee Oh Sees & the free beer and slept through the rest of the day…

-The Dead Milkmen (QRO photos at a festival) @ Warsaw (QRO venue review). Warsaw would have more than just you & me, punk rock girl…