In 2009, L Magazine opened up Northside Festival, showcasing the music in Williamsburg and Greenpoint. It’s grown since then, including a large ‘Innovation’ portion that can sometimes seem to... 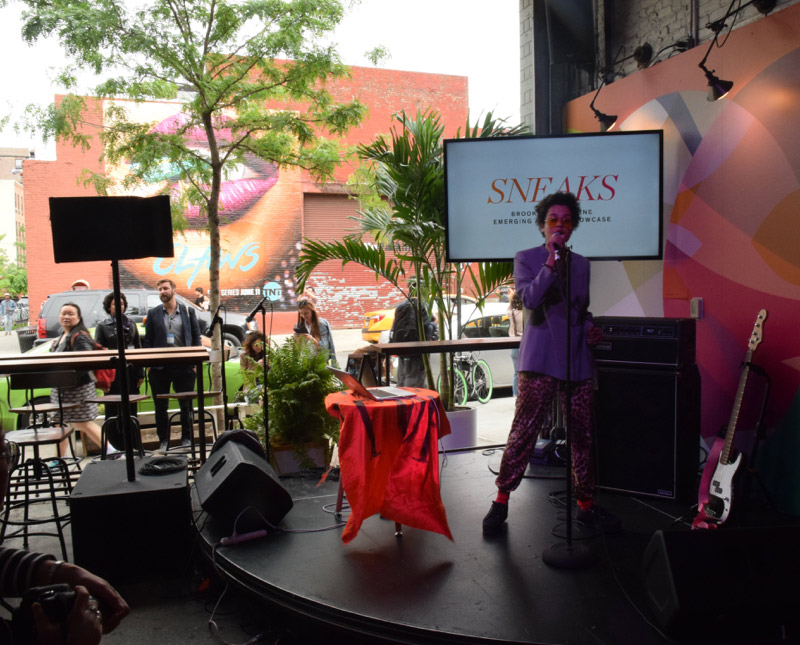 Press picked up their badges at Kinfolk 90, which also meant a chance to check out Sneaks. It all happened at the ‘TNT Backstory Studio’, branded by the basic cable drama network. Big sponsors are generally necessary, but also welcome, to keep events like Northside going (no doubt the loss of them crippled it’s late big brother, CMJ), but the big screen behind Sneaks, with her band name and TNT logo, made it all look a little like a launch party for a new TNT series, Sneaks (there was the classic 1992 Robert Redford & River Phoenix movie, Sneakers, which one could see TNT rebooting as a series…).

Sneaks herself was just her bass, laptop, and voice. Normally she has a band, and while it was neat to see her, a lousy set-up. 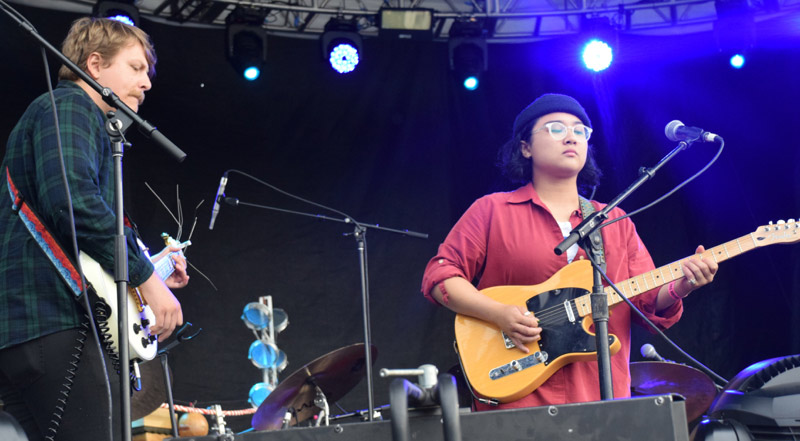 The main Northside Music action always takes place at McCarren Park (note: not McCarren Park Pool, however much your correspondent wishes that place was a music venue again – QRO venue review). It’s a mix of free shows and paid ones to benefit the non-profit that helps take care of New York’s open spaces, Open Space Alliance.

Opening the ticketed show on Thursday was Jay Som, with their relaxed art that was nice, but not exactly gripping. 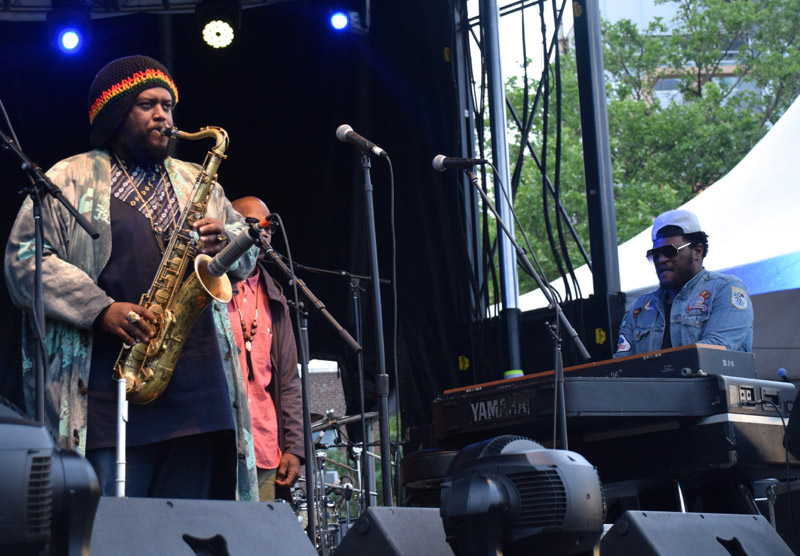 Somewhere between too artistic and accessible is Kamasi Washington. He’s an alt-jazz artist, but perhaps the most accessible art-jazz artist. If you don’t like Bitches Brew, not for you, but for modern jazz, a great act to get people into. Outdoors at McCarren Park, they did spend what felt like an inordinate amount of time jamming, and not even together, just looking at one person (not even saxophonist Washington) while only the rhythm section continued performing. 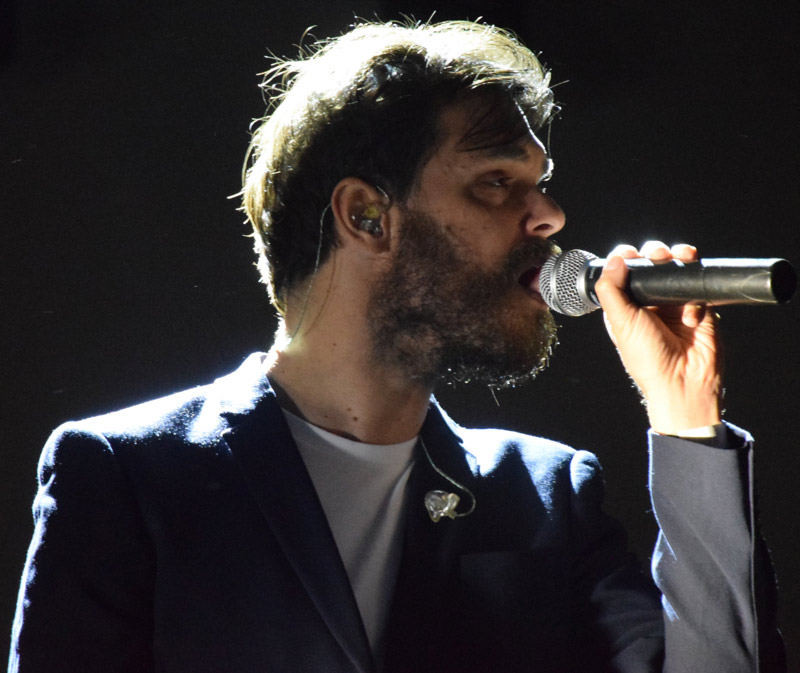 But this was an ‘art’ night, thanks to headliner Dirty Projectors. Once upon a time, Projectors was a band created by David Longstreth, but also featuring the likes of Amber Coffman and Angel Deradoorian. However, Deradoorian left and was replaced by Bell, and more recently Coffman left, and at McCarren Park Olga Bell was just a part of the large semi-circle that stretched behind Longstreth, focusing all attention and action on him.

Longstreth /Projectors played his/their new self-titled album, which is one that’s out-there even for him, but it was a big crowd for a ticketed show by three non-mainstream artists. 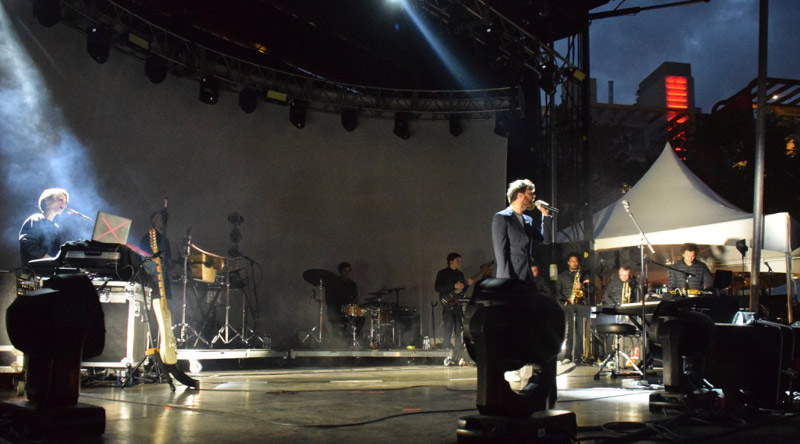 –Reaktor had an RSVP party event at Brooklyn Brewery, but it was only one beer token each, hardly worth it.

-Meanwhile, Perkins Coie party on the rooftop at McCarren Park Hotel, overlooking the park, was for badges only, and had full open bar & hors d’oeuvres. Would literally go there, head down to shoot McCarren Park act, and then back to the rooftop. 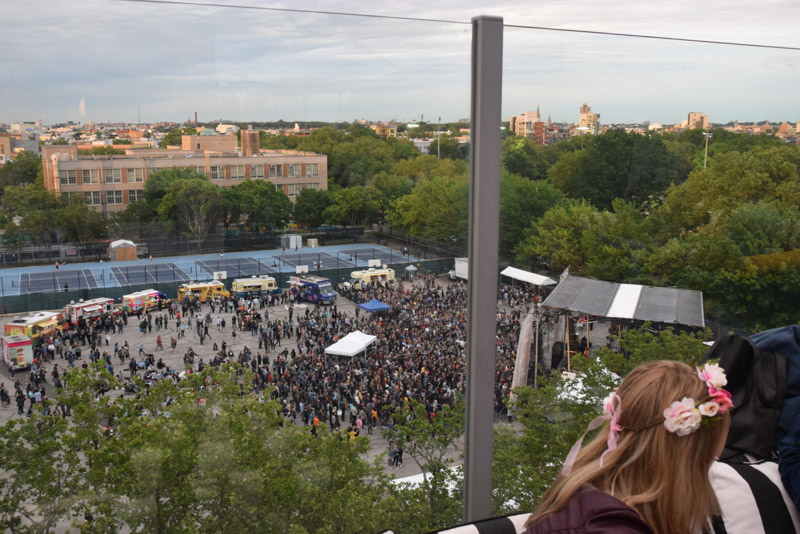 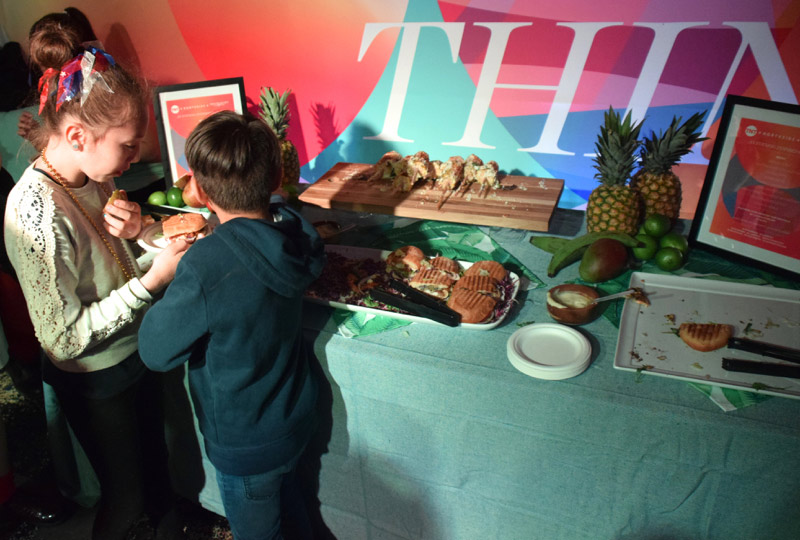 For a particularly sponsored event, there was the one for Claws, the new series on TNT. It features Niecy Nash (Deputy Raineesha Williams of Reno 911!), Carrie Preston (who played Ben Linus’ mother on Lost, but is in reality married to the actor who played Linus, Michael Emerson – she later played Emerson’s character’s love interest in Person of Interest), and Harold Perrineau (Michael of Lost) – not sure whether it is a drama (which is, according to TNT’s tag line, what the network “knows”) or a comedy (which is what it looked like on screen – apparently was first developed as a comedy for HBO).

The series is set in south Florida, so there was Cuban food, Cuban drinks, and a Cuban band playing. While a little disorganized at first (and those drinks could take a while), it was a nice event. 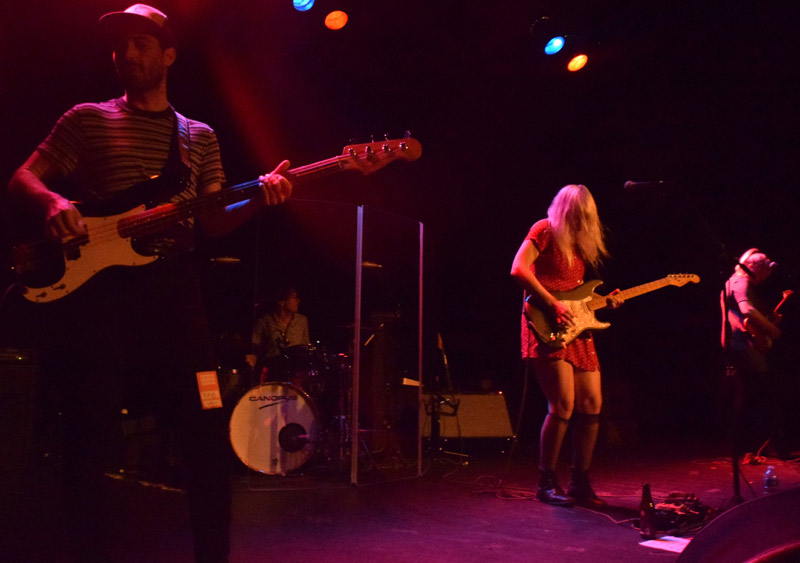 One of the ‘regular’ shows that was part of Northside ’17, The Pains of Being Pure at Heart played Music Hall of Williamsburg (QRO venue review). Opener was Beverly, who sounded like Pains with a female vocalist (so fitting on the bill). 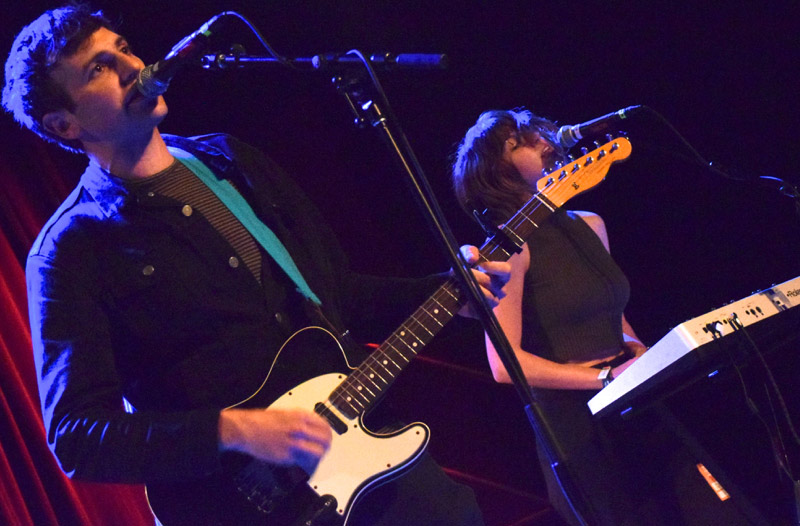 While The Pains of Being Pure at Heart were once a band, it has since transformed into singer/songwriter Kip Berman and his touring members. The group have a new album coming out in September, The Echo of Pleasure, so the night at Music Hall naturally had a lot of new, unfamiliar numbers. Still, it was the fuzzy sun from them like always, and pretty twenty-something girls like moving to them.

It was a hometown show for the band, with Berman mentioning that lots of his friends were there, up in the balcony, inciting them to drink the band’s beer, before adding that the band had already drunk it. Not there was his wife, who was taking care of their sick baby.

-Dutch Music Embassy had an event on McCarren Park Hotel’s rooftop, but unlike the event there the day prior, it was open to RSVPs (Thursday’s had RSVPs, then literally followed up by saying too many people had RSVPed, so it was badges-only). So it hit capacity almost immediately.

-Northside late announced a free event with DJs at McCarren Park on Friday, but there didn’t seem to be anything going on, at least early (save for getting drink tickets for press…). 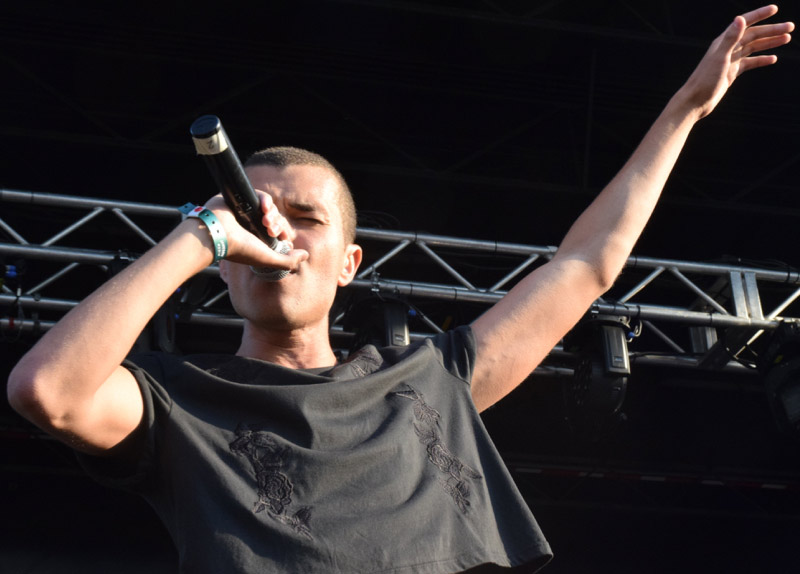 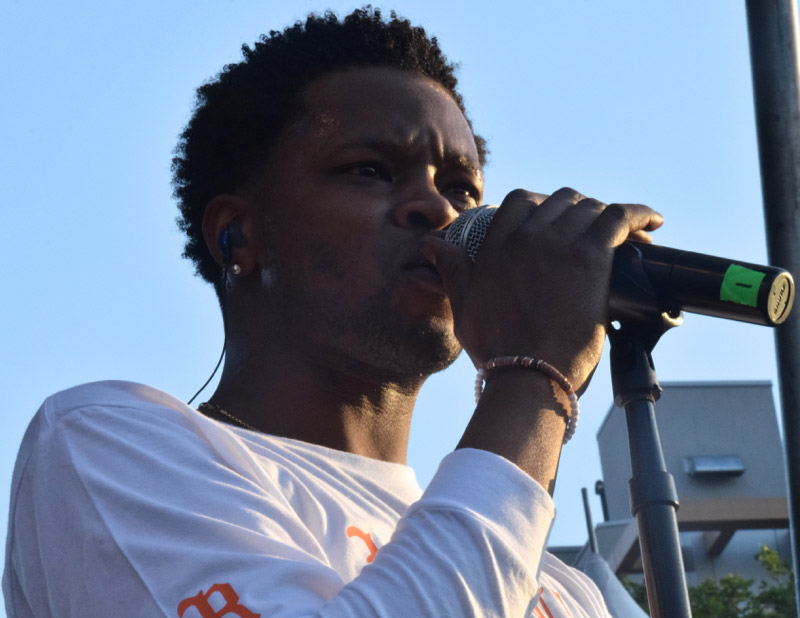 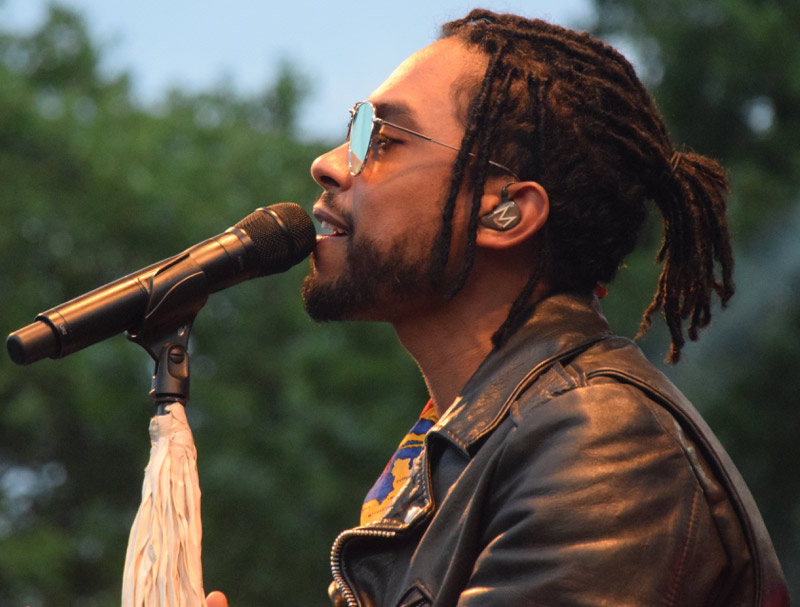 While Brooklyn’s McCarren Park was getting punked up to close out Northside ’17, your correspondent was getting funked up at Queen’s Flushing Meadows-Corona Park with George Clinton & Parliament/Funkadelic and more (QRO photos).