<img src="http://www.qromag.com/wp-content/uploads/2009/06/northsideday1sm.jpg" alt=" " />Northside started off bar hopping, like a drunken version of the upcoming Bloomsday, with some mixed directions and mixed surprises. ...

Day One of the new Northside Festival started off at the very comfortable HQ, picking up badge, schedule (with updates), free Heineken, and free sneakers, for some reason.  This did help make the rest of the day a bit of a wander, with little that was must-see, but lowered expectations – and heightened inebriation – helped out the Thursday night. 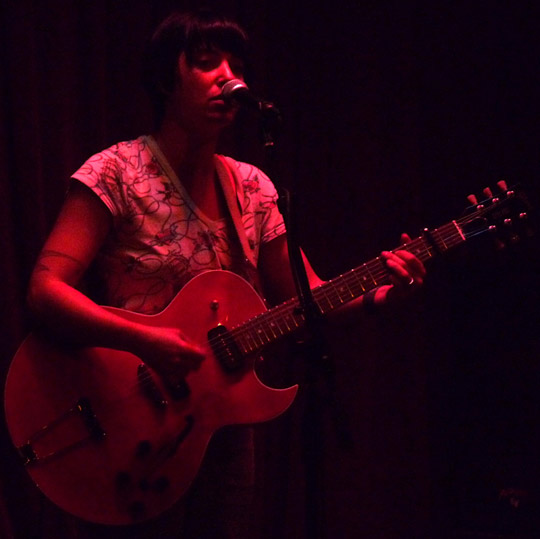 After going home to drop off the new shoes, headed back to Brooklyn for Sharon Van Etten (QRO album review).  Of course, went the wrong way out of the Lorimer St. subway stop for Union Pool (QRO venue review), and only caught the latter half of Van Etten's last song.  What was seen was good, but one can't help but feel that any solo singer/songwriter would be better with a backing band – I don't care if you're Sharon Van Etten or Grant Hart (QRO photos). 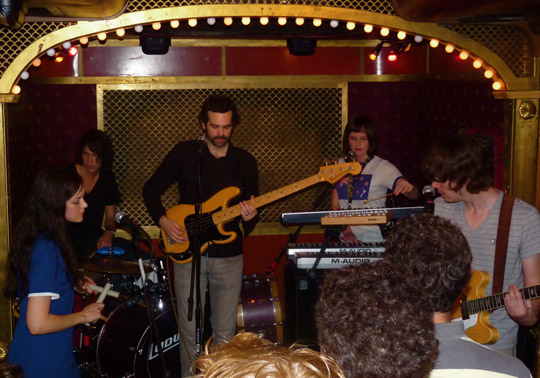 So late an add that they weren't even on the schedule update (the Pete's Candy Store show itself was, but 10:00 PM was listed as "tba"), guess that's what happens when you're from halfway around the world.  The Brunettes may hail from New Zealand, but like countrymates Flight of the Conchords (QRO live review), they're on Seattle's Sub Pop – and have been playing around New York a lot lately (had a last-minute add, at Mercury Lounge – QRO venue review – the prior week).  So it was a good thing that I'd gone home and checked the online schedule after getting the badge, because The Brunettes were an act I'd always wanted to catch, but never had.

The band's alt-pop was catchy without being too cheerful, something New Zealand bands seem to do well (see: the recently re-united Clean – still waiting for the return of Straitjacket Fits, though…).  Sometimes called "Australia's Canada", New Zealand has batted above its weight in indie music for a long time now, much like the actual Canada (or like Oregon, which is "California's Canada", according to Stephen Colbert).

The Brunettes playing at Pete's Candy Store in Brooklyn, NY as part of the Northside Festival on 6/11/09:

Pete's Candy Store (the first of many Brooklyn venues seeing for the first time at Northside) did leave much to be desired, however – the door from the bar to back venue slides, causing a lot of pushing with no result, and the side entrance hallway isn't easy to spot.  But what's really annoying is that the back venue is a converted train car – while that means it looks neat, it is long and thin, with almost no stage riser, and chairs on both sides, making it almost impossible to see the band if you're not up front (had to stand on a chair to see the singer/guitarist, though had a good view of the singer/keyboardist).  This would be made up for by the fact that shows there are free – if I didn't have a badge. 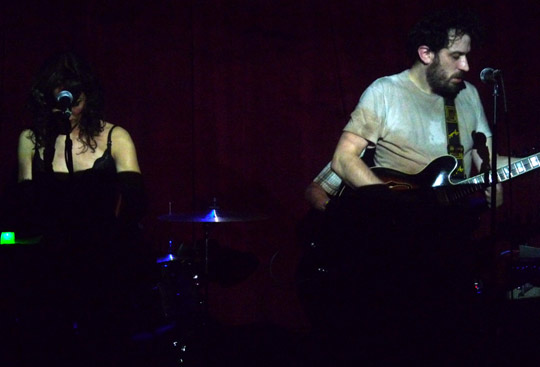 One of three bands whose drummers I met while drinking free Heineken at the place you pick up your badge, Himalaya was curating their own showcase at Spike Hill.  Does that mean they were responsible for the weird, off-putting light show?  It was some sort of film projection that light up half the faces of the singer/guitarist and singer/keyboardist, making them as hard to see as The Brunettes' singer/guitarist & singer/keyboardist at Pete's Candy Store (see above) – only the bassist was really completely visible (only bonus: the singer/keyboardist had swiped a couple of the light cubes from the badge/Heineken area – the ones that were inset into the table under what looked like glass but was actually nothing, leading to many an accidentally spilt beer).  Their grand rock was strong enough, if you could look past the light show.

Himalaya playing at Spike Hill in Brooklyn, NY as part of the Northside Festival on 6/11/09:

Another venue I was seeing for the first time, had passed by Spike Hill many times, as it lies right off the Bedford Avenue L stop at N 7th Street.  There's a long, thin, cramped bar you have to go through to get to the back venue, but the two spots aren't separated like at most bar-cum-venues (though it's actually 'Spike Hill Music' – the full-fledged Spike Hill is next door).  Other than the light show, decent for a place never been to before, and certainly easy enough to find & reach. 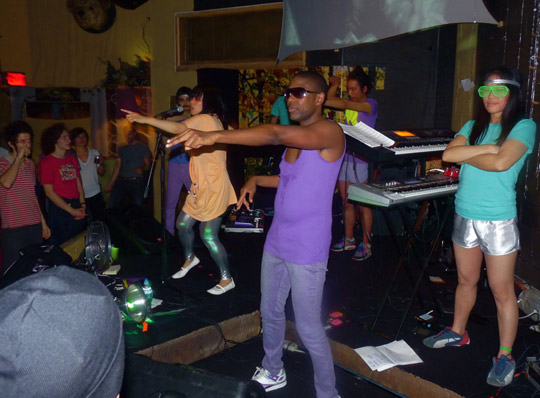 One place that's not as easy to get to is Union Pool – again went the wrong way, and ended up going to the also hard-to-find Glasslands Gallery.  Mito Hatori was previously in Cibo Matto with Yuka Honda, a Japanese-fronted noise-rock band that was actually pretty good (and played on the Season Two premiere of Buffy the Vampire Slayer, just so you know).  She was also in Gorillaz (QRO album review) with Damon Albarn (of Blur) & Del the Funkee Homosapien (QRO photos) on the first record, self-titled record.  So, yes, the whole thing was weird, but fun to look at.

Or at least, it would have been, if Glasslands wasn't so damn dark.  Around the corner from (and possibly in the same building as) Death by Audio (QRO venue review), Glasslands' entrance is a door on Kent Street, right near the river, that's easy to miss.  And it's even harder to see inside the place, which seems to be lit mainly by candles and colored dance lighting.  In addition to making it hard to see a band, it's a pity for two more reasons: one, the actual place is set up with some interesting bric-a-brac on the walls, and two, the floor is black – making the steps very easy to miss.  There's a step down right next to the bar as you come in – if you've got a drink, can spill it right in your face as you fall forward.  And the steps up to the bathroom might be slightly easier to see, but they're of uneven size, especially the too-high last one, and there are often people sitting on them. 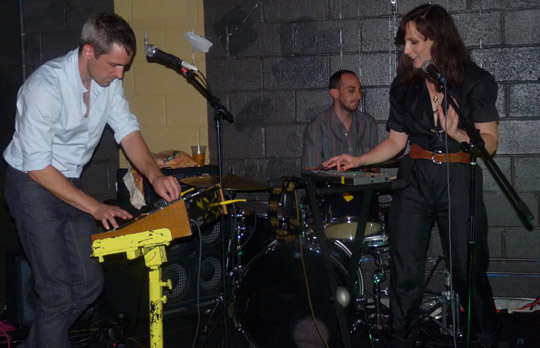 The electric dance band Class Actress were good for a dance band, if that's what you're in the mood for, and many people at Glasslands seemed to be – though that might have been because they were all friends with the band.  But it was closing in on 1:00 AM, and this was only Day One of Northside.

– Brightblack Morning Light (QRO album review) & Northside Opening Party @ Studio B (QRO venue review).  The Northside Opening Party (with BBQ & free Heineken) was on Studio B's new rooftop patio, but Studio B is a long walk from the action, and the badges place had more than enough free beer.  One of the two 'big bands' on Day One of Northside, later actually heard that Brightblack Morning Light were really boring from someone who was there.

– Ólöf Arnalds (QRO photos at a festival) @ Union Pool.  The second time I went the wrong way towards Union Pool.

– The last-minute cancellation of Sia (QRO photos at a festival) @ Artlog House.  She was too popular to playing that, anyway.

– The Hold Steady (QRO live review, at a festival in Brooklyn), with Hype of the States @ Music Hall in Williamsburg (QRO venue review).  Going to pick up the badge, walked by a line in front of Music Hall – an hour before doors opened!  Virtually everyone who had a badge said that they didn't think they could get in to see The Hold Steady with it, since interest was so high, and Northside hadn't purchased that many tickets.

But why would you?  For starters, this was the fourth show in a row that The Hold Steady were playing in New York, the second night at Music Hall after two nights at sister venue Bowery Ballroom (QRO venue review).  More importantly, The Hold Steady are one of those over-rated bands one can't understand why people love them so much – they did pick an opener with an apropos name…

– Really just by coincidence, every band seen on Day One had at least one female member.  Who says indie-rock is still a boy's club (though, like many bands with women, the/one of the women is a singer)?