After getting a little too comfortable on Day One of Northside Festival, Day Two had places to go and bands to see.  Some bands did better than expected, some bands did worse – the main thread was the walking, all the walking… 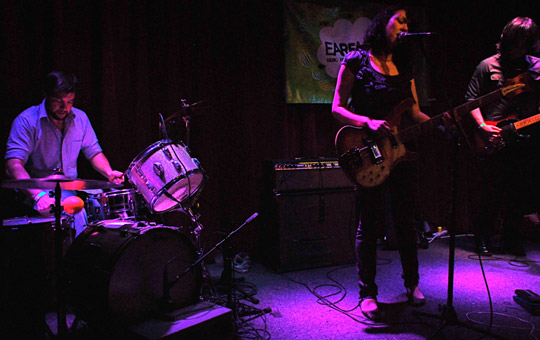 One of three drummers met while drinking free Heineken at the badge spot on Day One (QRO Northside Day One recap) was the drummer for Coyote Eyes.  So, after fretting over a broken computer and broken cable, hit the band up at Spike Hill.  Thankfully, the weird projection light show of Himalaya last night at the place was gone, making it easy to see the three-person act.  Fronted by yet another female singer – even their male guitarist/back-up vocalist’s voice sounded a little feminine.  At least this time, the woman also played bass, though that made the otherwise strong Coyote Eyes were good, if a little bass-heavy. 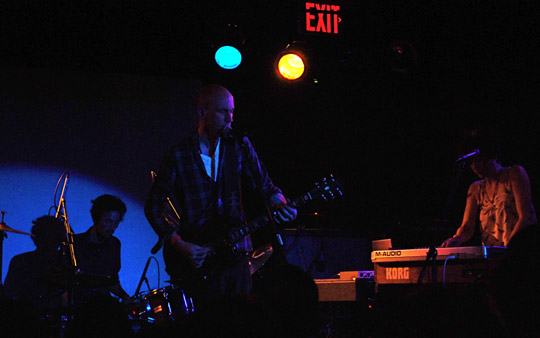 Got to Studio B (QRO venue review) early to ensure entrance for Sunset Rubdown (see below), caught most of opener Witchies.  Decent enough (and first band of Northside seen who didn’t have a female singer – but there was still a lady doing bass & keyboards), and got better at the end, but the only really memorable moment was the singer retelling his favorite heckle, "After a band did one song, someone in the crowd said, ‘One more!’…  So top that." 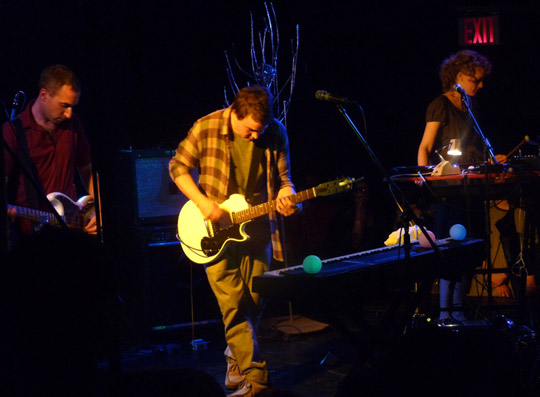 The top highlight of pretty much the entire Northside Festival had to be Montreal’s Sunset Rubdown.  Centered around Spencer Krug of Wolf Parade (QRO live review), Sunset Rubdown has the fuzzy-but-sharp sounds of Parade, but with more of a ‘getting your demons out’ energy from Spencer Krug.  With the new Dragonslayer coming out in little over a week (QRO upcoming release schedule), the band naturally focused on new numbers, especially at the start.

Sunset Rubdown playing a new song (including Spencer Krug complaining about the microphone) at Studio B in Brooklyn, NY as part of the Northside Festival on 6/12/09:

Krug and the rest of Sunset Rubdown were funny and charming during the breaks and problems, even handling well the crowd’s shouts that everything sounded good.  And before he the new song above, he admitted that "since you’ve never heard it before, you won’t notice if it sounds off…"  Still, by the end (and they did play past 10:00 PM, but not long past), it felt kind of indulgent of Krug.

That technical drama, plus the relative unfamiliarity of the early songs, took away from what should have been the best show of Northside.  However, even an underperforming Sunset Rubdown is still strong, especially when they finally hit up tracks off of last year’s Random Spirit Lover (QRO album review) nearer the end of the night (when someone shouted for an even older song, Krug just wryily replied, "No…" – they also didn’t fulfill a request for "The ‘Leopard’ song" – Random‘s "Up On Your Leopard, Upon the End of Your Feral Days", but keyboardist Camilla Wynn Ingr did say, "Maybe we need another ‘Leopard’ song…").

Sunset Rubdown playing "Mending of the Gown" at Studio B in Brooklyn, NY as part of the Northside Festival on 6/12/09:

It had been two years since I’d been to Studio B, but the place hadn’t changed much – at least the downstairs.  Not enough lighting, unusual couch area to the house-left of the stage, etc.  What was new was the rooftop patio, done in poolside-style with too many fronds and lots of smokers.  And while heading to the bathroom, stopped behind a guy outside the door who was talking to his hand, pinky and thumb out, against his ear, like a cell phone – and he even said, "Go ahead.  I’m just on the phone." 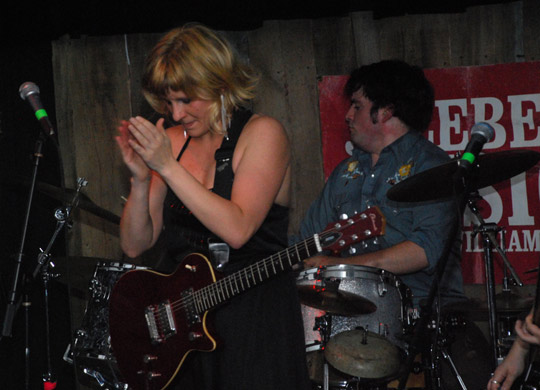 The third of three drummers I met at the place you pick up your badges the day before was in The Art of Shooting.  But wasn’t expecting such a female-lead group, mixed between girl-rock and a more emotional sound.  It all took place at the new Cameo Gallery, which is at the back of N 6th’s Lovin’ Cup bar/restaurant.  Really just a box with a little booth for a bar and some built-in benches on the sides, Cameo does have these dangling reflective stands right above the band, with changing colors. 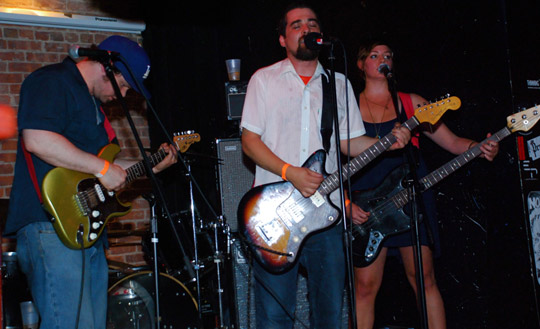 After the long walk from ‘downtown Williamsburg (i.e., the Bedford Avenue stop) to Studio B (past McCarren Park & the ex-venue McCarren Park Pool – QRO venue review), and the long walk back to Cameo (which is one the same street as Music Hall in Wiliamsburg – QRO venue review – and Public Assembly – QRO venue review), walked even farther, back up through McCarren Park again (and around the corner from a police station, if you can believe it), for Europa.  Having never been to the venue before, made the mistake of confusing the downstairs for the main room, a small, kind of seedy area, with a late-added showcase, including Eagle Hawk Falcon.  Luckily, their catchy cow-punk was enjoyable enough, and after they were done, figured out the main show was going on upstairs. 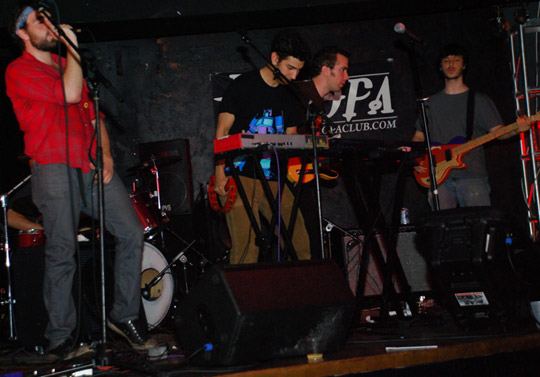 Upstairs at Europa is a much different beast: far larger, more open, and certainly classier, with really nice bench-cushions creating booths along the wall (divided by somewhat strange chainlink-like curtains).  That made it easy to watch while sitting down, a major bonus after all the night’s walking.  On stage was another late-add, Red Wire Black Wire, who were down a member (their one girl, making them the first band at Northside I saw without a female), as she was "currently tripping her ass off at Bonnaroo" (QRO Festival Guide).  Their electro-dance was reminiscent of fellow Brooklynites Passion Pit (QRO album review), brighter and fun.  However, their best piece had to be their cheezily awesome cover of Pat Benetar’s "Love Is a Battlefield" – aided by their ‘mosh pit’ of friends dancing (note: not really a mosh pit). 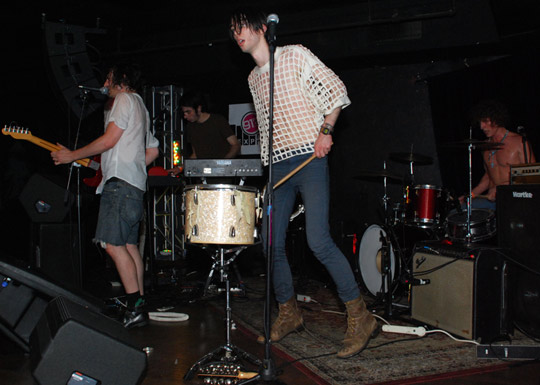 But had walked all the way to Europa for Electric Tickle Machine, on the recommendation of KEXP’s own Jonathan Thaler (QRO interview).  And the mobile man did not disappoint, as the wild band threw a great show, making it easily the nicest surprise of Northside so far.  Their seventies psych-party rock (and look) was akin to MGMT (QRO live review), only the Machine went even crazier.  One guy in a muscle-like shirt spent as much time going nuts in the crowd as on-stage, and the one ‘normal’ guy in the band, the keyboardist, had a wild girlfriend dancing crazy.  She also presented her boyfriend with a drink where she had melted candles around the rim, as it was his birthday (though you couldn’t drink it – just as well, really, since at least one of the candles fell in).

– The Beets, Sean Bones (QRO photos), Drink Up Buttercup (QRO photos) @ Bruar Falls.  Curious about The Beets, curious about the new Bruar Falls, from the people behind Manhattan’s Cake Shop (QRO venue review).  However, Drink Up Buttercup are a little too clanging on trashcans, and Sean Bones (featuring half of Sam Champion – QRO spotlight on) are reggae – great if that’s what you want, but that has to be what you’re in the mood for.

– Wild Yaks @ Europa.  One of the main purposes of Northside was to see buzzed-about Brooklyn bands like Wild Yaks.

– The Tallest Man On Earth, Ólöf Arnalds (QRO photos at a festival) @ Music Hall in Williamsburg.  Lots of people have been talking about ‘Sweden’s Dylan’, The Tallest Man On Earth (including QRO’s own Abby Johnston – QRO articles), and no one’s been talking about Iceland’s Ólöf Arnalds more than BrooklynVegan, who was throwing this showcase (which also featured a gallery of his site’s concert photos – though none by ex-photo editor Kyle Dean Reinford…).

– Golden Triangle @ Union Pool (QRO venue review).  And this Brooklyn band earned their buzz by winning the Battle of the Bands at SXSW (QRO recap), judged by GZA, No Age (QRO live review), and BrooklynVegan.

– These Are Powers (QRO album review) @ Death By Audio (QRO venue review).  Kind of an appropriate name for a venue featuring this god-awful noise-rock band, who I’ve seen twice at festivals (QRO photos from 2007 festival – QRO photos from 2008 festival), and hated both times.

– BLK JKS (QRO photos at a festival) @ Trash Bar.  After having taken forever to set up at SXSW, forcing a delay of my beloved Harlem Shakes (QRO spotlight on), Johanessburg’s BLK JKS are must-avoid.

– Shilpa Ray & Her Happy Hookers (QRO photos in Brooklyn) @ Spike Hill.  Thankfully got out of Spike Hill before Shilpa Ray (QRO solo photos in Brooklyn).  Formerly of Beat the Devil (QRO live review), have never keyed into her – don’t like her bellowing voice, am not impressed by her harmonium (some Indian instrument that’s basically an accordion played on its side), and have never forgiven her for playing an encore when opening for Harlem Shakes’ first NYC show in over a year (QRO live review).  No one delays the Shakes and gets away with it…

– After drinking too much on Day One, went teetotaller on Day Two.

– Every time I walk by McCarren Park, it makes me miss McCarren Park Pool.  When are the new Pool Parties, at Williamsburg Waterfront, going to start?