Day One of Northside wasn’t as relatively light as Day Ones usually are at multi-venue ‘industry fests’ like this, CMJ (QRO Day One recap), or SXSW (QRO Day One recap).  Still, with no daytime shows there wasn’t much to do but pick up your badge and pick up some free Heineken at the Northside HQ, before heading out for the evening.

A late bus and a head full of hardlined set times for each band made me realize that I needed to get there as soon as possible.  One forced march to HQ coupled with a breakneck pace to Spike Hill (QRO venue review) and I finally make it right on time–right on time for them to finish up sound checks for The Pass.  Little did I know that arriving thirty minutes early to each show would become my unintentional Northside quirk for the entire festival. 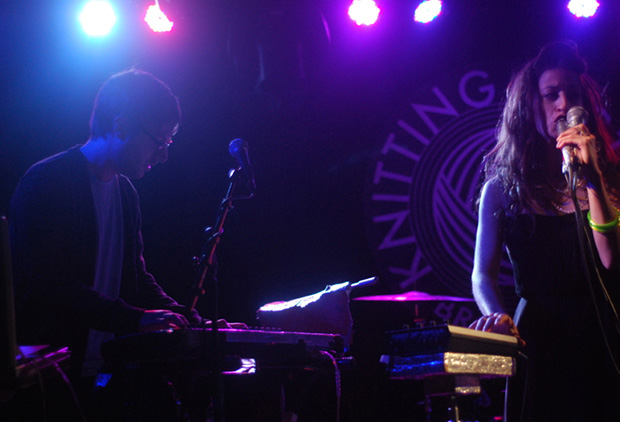 Click here for photos of Zambri from SXSW 2012 in Austin, TX in the QRO Concert Photo Gallery

Click here for photos of Zambri at CMJ 2011 in New York, NY in the QRO Concert Photo Gallery

Click here for photos of Zambri at Piano’s in New York, NY on November 3rd, 2010 in the QRO Concert Photo Gallery

The free Heineken at Northside HQ ended at 7:00 PM, not 8:00 PM like the badge pick-up, so had time to make it to an early set by Zambri to start Northside 2012.  Zambri were doing double-duty at Northside, playing again late the next night, so not essential to catch them there & then, but a great way to start off Northside.  Definitely enjoyed them more after knowing their great new record, House of Baasa (QRO review), a nice combo of electro post-rock-ish tragedy, but with more energy.

Click here for photos of Zambri at Piano’s on April 12th, 2008 in the QRO Concert Photo Gallery

A lot of people thought to start their night at what was the best top-to-bottom line-up of Night One of Northside, as lots of NYC photogs all seemed to conglomerate at Knitting Factory (QRO venue review), all seemingly surprised to run into each other. 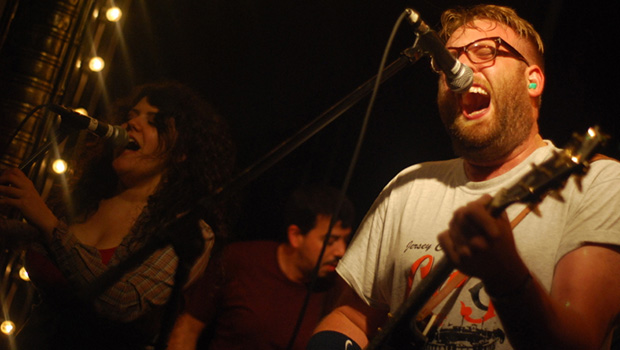 Did spend a good deal of Zambri’s set trying to read the Northside schedule, but the small print and dark background in the handout were not designed to be read in a club.  But it was still light out when I headed to Grand Victory for Courtesy Tier at their designated start time of 8:30 PM, only to run into them outside and find out that they’re playing at 10:30 PM.  It would not be the first time that the Northside schedule was wrong…

So instead headed to Union Pool (QRO venue review) for a friend of Courtesy Tier’s, The Everymen.  Admittedly was first interested because someone in the band works for an important label – that was how I heard of them.  But they were an enjoyable kind of garage, rockabilly orchestra, with seven members – haven’t seen a stage that packed since… the seven members of Los Campesinos! (QRO spotlight on) played a secret show at Union Pool (QRO photos).  The Everymen didn’t have a violin, but did have a saxophone… 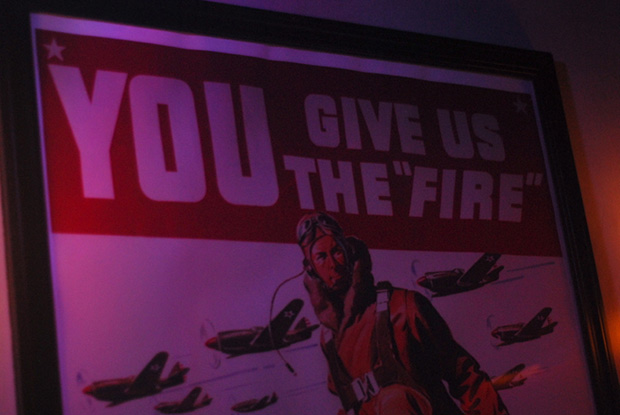 Went back to Grand Victory for The Nico Blues (QRO album review), only to find out that their scheduled start time of 9:30 PM was also wrong – they had played at 8:30 PM.  So ended up catching Those Mockingbirds, who felt a little earnest in their rock (but they did have a violinist).

Grand Victory used to be Bruar Falls, the Williamsburg outpost of Manhattan’s Cake Shop (QRO venue review).  The new space is way nicer than that dive-y ex-club, and is a World War II homefront-themed bar, complete with era posters and photos.  It’s a bit like going to see a show in your grandfather’s study (complete with classy liquor line-up), even if he didn’t serve in WWII and name his daughter ‘Victory’… 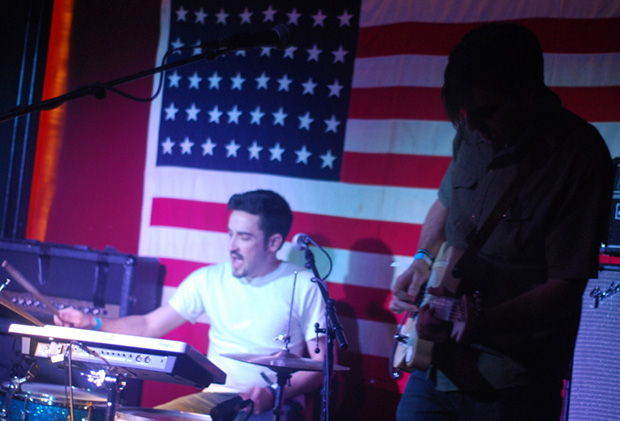 Click here for photos of Courtesy Tier at CMJ 2011 in New York, NY in the QRO Concert Photo Gallery

Click here for photos of Courtesy Tier at Bushwick Walkabout at Brooklyn Fireproof in Brooklyn, NY on July 16th, 2011 in the QRO Concert Photo Gallery

That’s if you could see the band, as there was basically only one spotlight.  Thankfully, that’s all that Courtesy Tier needed when they (finally) came on stage.  One could say that they also have an earnestness to them, but an effective way of doing it.  There’s also a touch of blues and country to them – more than a touch, really.  They did two new singles, and still sound fuller than all of those run-of-the-mill garage-rock guitar-and-drums two pieces out there. 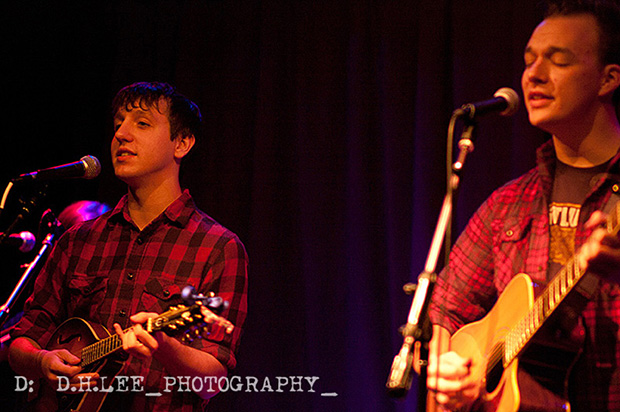 Hailing from Louisville for their first show in NYC, BEADY seemed to celebrate their arrival with technical issues in the beginning that felt almost ironic, given a fairly acoustic setup.  Not to be unnerved by a few technical faults, their performance carried on without skipping a beat; a good thing, considering BEADY’s sound involved a lot of combined voices to invoke their harmony.  All-in-all, a solid performance from these newcomers to Williamsburg’s lineup that I would look forward to seeing come around once again. Perhaps it wasn’t a bad idea to come in so early after all. 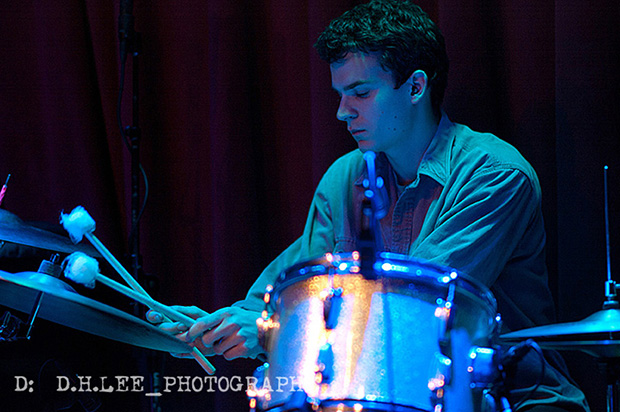 The two man team of Port St. Willow came in next.  Showing off his ability to defy limits by giving 110%, Nick Principe performed on stage as vocalist, guitarist, and keyboardist-given that Port St. Willow is advertised as his project, he may even have worked as drummer if he could grow an extra set of arms.  The crowd drew love and praise for the ambient soundscapes and diva-like crooning that the two men drew out through the performance. 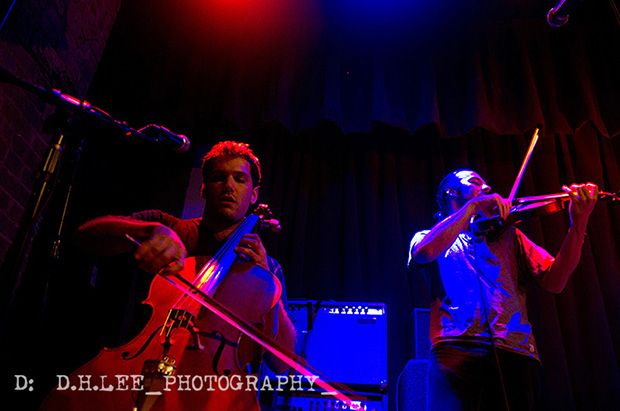 Click here for photos of Miracles of Modern Science at CMJ 2011 in New York, NY in the QRO Concert Photo Gallery

Click here for photos of Miracles of Modern Science at Brooklyn Bowl in Brooklyn, NY on January 26th, 2011 in the QRO Concert Photo Gallery

No strangers to Williamsburg’s scene, MoMS hit the stage to the fanfare you’d expect the veteran Brooklyn group to receive.  Rich vocals from Evan Younger seemed reminiscent of Barenaked Ladies’ Steven Page combined with the lighthearted folk rock fare of the band kept the crowd (and their violinist Kieran Ledwidge) dancing from beginning to end brought smiles for everyone.  It’s good to be back in Brooklyn. 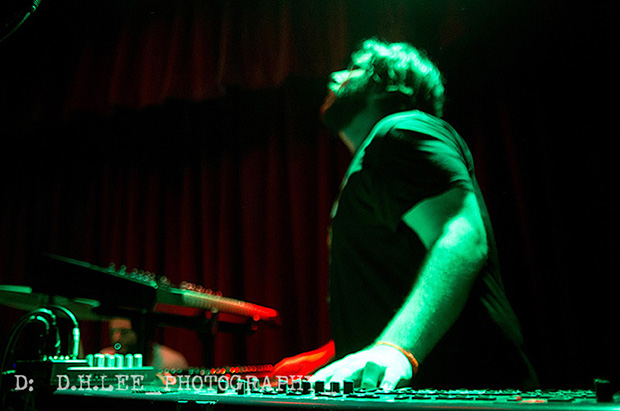 Already initially impressed with them from previewing their MySpace set and catching some of their material during sound check, the headliner of the night was Louisville’s The Pass.  Four men veiled in strobe lights and lasers, I was at times reminded of Nashville’s Royal Bangs for embracing that same kind of electronic sound in their rock, although their fare put more emphasis on a dance-friendly funk sound, often playing around with it enough to switch between taking a heavier hard rock sound in one piece only to lean into an electro dance sound the next.

-The bartender at Union Pool looked like a punk version of Tom Friendly from Lost (the bearded guy whose character actually was wearing a fake beard).