After an extended Day 2 (QRO recap), I was exhausted.  Not only did I miss Ravens & Chimes (QRO album review) at Spike Hill (QRO venue review) during the day, but also a special show at McCarren Park with Dean & Britta (QRO spotlight on) – but that had only been announced the day of, so not really my fault.

And had already spent a lot of time at Jameson Lounge, so skipped Caveman (QRO album review) there in the early evening.

Saturday seems to be when Northside’s schedule comes out strongest and it seems that quite a number of acts were out that I wanted to catch but had to forego for one choice or another.  For the most part, took some familiar steps with last year’s lineup partly out of laziness, partly because research (YouTube) suggested I would enjoy it.

I remember visiting this venue last year and being impressed at their offerings and a couple of trips to YouTube confirmed that I would give it a try again.  For the record, I made it to this one 30 minutes ahead.  Again. 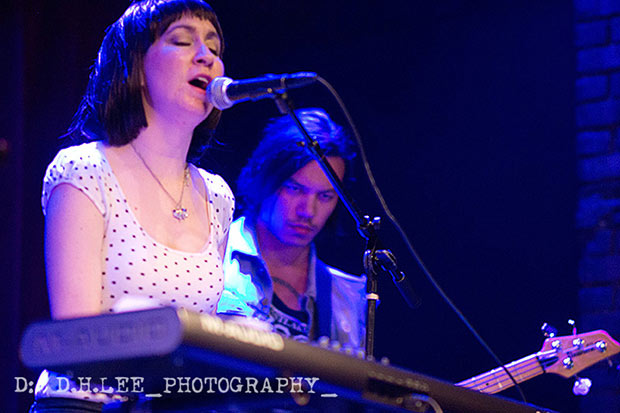 Bringing a sultry, dreamy lounge sound to Spike Hill, Starlight Girls was the first to the lineup.  It’s a retro sound that brings up images of smoky dance halls with red swinging doors with circle windows and Speed Racer-style fashions.  Probably just me. 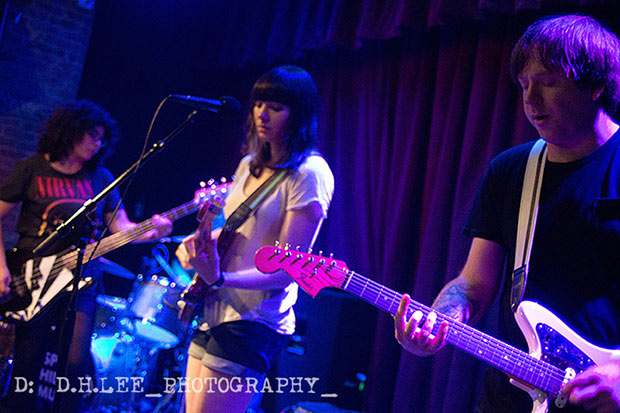 Despite missing a good number of their usual members, Field Mouse‘s first of two acts -the second at Brooklyn Bowl’s show with Ape School, EXITMUSIC (see below), and Asobi Seksu – worked.  Between the weaved dream pop sound of synthesized harmony and soft croons that felt like a modernized fusion of new wave (complete with vocals that match some famous singers of that time), singer/guitarist Rachel Browne also offered humorous quips that made the show part stand up act. 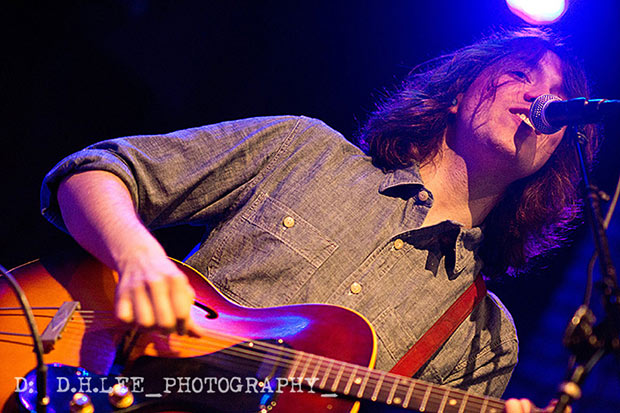 Click here for photos of Ravens & Chimes at CMJ 2010 in New York, NY in the QRO Concert Photo Gallery

Described as "indie art rock," Ravens & Chimes played a very smooth harmony with a ballad style towards their music that was not afraid to play with its pace.  Despite a guitar that broke its string after second song – almost as though it was on queue, guitarist Asher Lack even remarked that he predicted this would happen for some reason – Spike Hill swelled to its fullest for a Saturday afternoon just to hear their sound. 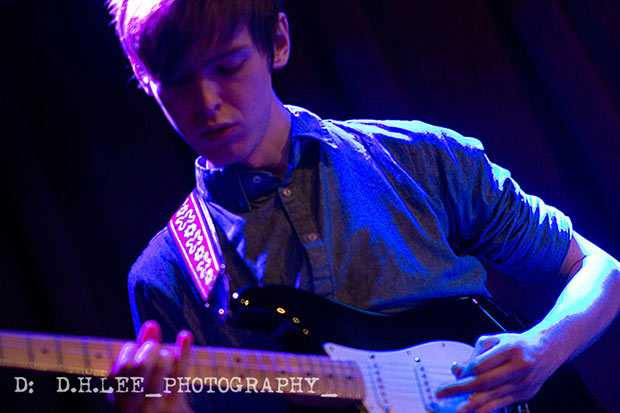 Tail end of L Mag‘s lineup finished with the beach-inflected Ski Lodge.  Felt appropriate to listen to outside on a sunny day.  Odd comparisons, considering how I described opening act, Starlight Girls.

Whatever Blog showcase @ The Spare Room at The Gutter – Donald Lee 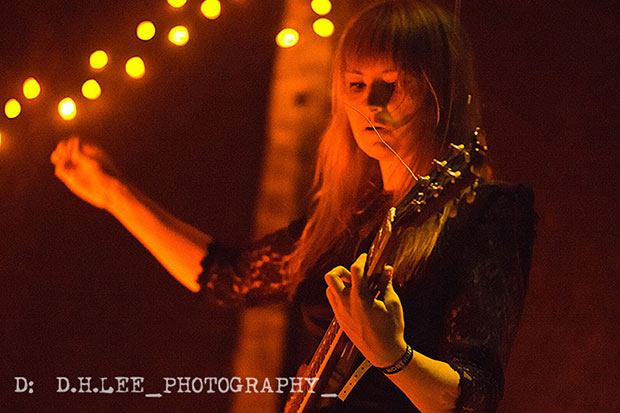 I caught WOJCIK last year at Northside’s Cameo Gallery (QRO venue review) to much pleasure (QRO photos).  The sound itself had that quicker, hard-edged sound with decent vocal range that kept me listening, but there is even more of a thrill hearing it while seeing drummer Geoff Lewit smash into his drums like a game of whack-a-mole.

Curiosity provoked me about their progress as they spent most of their time this year working on a new album; clearly was not alone as a few familiar faces from Northside’s lineup also came.  As expected, lots of new material was played and it seems Hailey and Geoff have embraced an even harder sound than I remember, much to satisfaction.  Unfortunately, left prematurely because Northside’s schedule suggested another show I needed to catch starting soon.  Should have realized by now that the schedules that day would be off by 30 minutes. 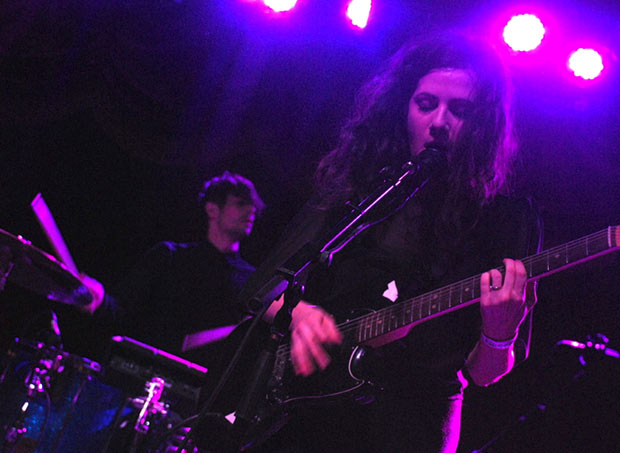 Click here for photos of EXITMUSIC at Scala in London, U.K. on May 16th, 2012 in the QRO Concert Photo Gallery

Click here for photos of EXITMUSIC at (le) Poisson Rouge in New York, NY on May 5th, 2012 in the QRO Concert Photo Gallery

Click here for photos of EXITMUSIC at Bluebird in Bloomington, IN on March 22nd, 2012 in the QRO Concert Photo Gallery

Click here for photos of EXITMUSIC at 2011 Constellations Festival in Leeds, U.K. in the QRO Concert Photo Gallery

Did finally get myself going in time to catch the (relatively) blowing up EXITMUSIC at Brooklyn Bowl (QRO venue review).  This was one of the bigger shows of Day 3 of Northside, and there was a heavy, actually kind of obtrusive photog presence for EXITMUSIC.

Thankfully, EXITMUSIC deserve the hype that they’ve been getting.  Their moody post-rock-ish sound on debut Passage (QRO review) was good if not great, but gets not only grander live (even in a somewhat less-than-grand setting, as one could also hear bowling pins being knocked over throughout the set), but also more engaging and captivating than you’d expect – not as automatically sleep-inducing (not that there’s anything wrong with sleep…). 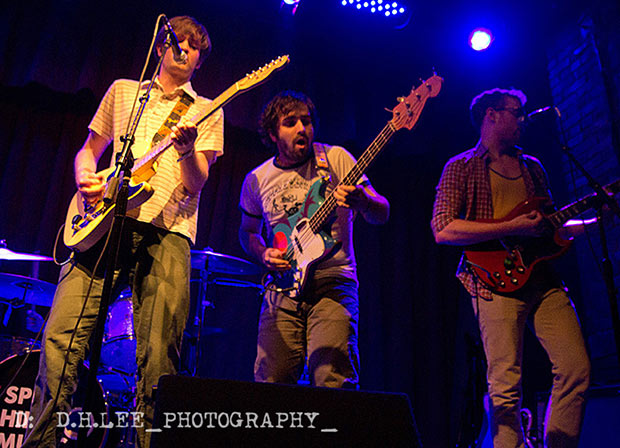 Photos of MiniBoone at Great Scott in Allston, MA on November 19th, 2011

QRO’s review of MiniBoone aboard Half Moon for Rocks Off Concert Cruises in New York, NY on August 16th, 2011

Photos of MiniBoone at 2011 Make Music NY in Brooklyn, NY

Photos of MiniBoone at Knitting Factory in Brooklyn, NY on April 14th, 2011

Photos of MiniBoone at Brooklyn Bowl in Brooklyn, NY on January 26th, 2011

Can’t have a Northside without Spike Hill; can’t have a Northside without MiniBoone.  The QRO favorite played mostly new stuff, still as energetic as ever, though they no longer do any instrument switching (probably for the best, especially at the cramped stage at Spike Hill).  It just leaves Craig Barnes to dance, Samuel Rich to jump, James Keary to scream, etc.  Doug Schrashun was more tied down, relatively speaking – even the new drummer got to shout at the start of one song, "I’m a fugitive – in Canada!"

Photos of MiniBoone at CMJ 2010 in New York, NY

Photos of MiniBoone at QRO Mag/Ampeater showcase at 2010 Northside

Photos of MiniBoone at QRO Mag/Ampeater showcase at Knitting Factory in Brooklyn, NY on June 3rd, 2010

Tempted to ask if I can rent a spot in Spike Hill and just live there at this rate.  Regardless, QRO’s favorite band was back and brought with them a lot of new material, much more than expected since their November show @ Great Scott (QRO photos), relegating their older material to only two songs, one of them the classic "Devil in Your Eyes" and the newer "Man/Woman".  As with most shows, plenty of that Talking Heads-ish sound coupled with plenty of jumping from guitarist Sam Rich. 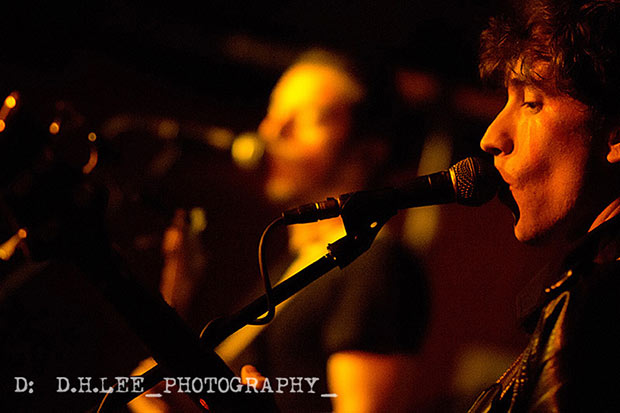 Click here for photos of The Gypsy West at Trash Bar in Brooklyn, NY on April 15th, 2011 in the QRO Concert Photo Gallery

Another band followed back last year before moving to Boston, the bluesy psychedelic funk sound of The Gypsy West performed at Trash Bar, as barefoot as ever.  Might just be me, but their set seemed tighter than I remember; their pieces in general seemed to favor more rock than the bluesier pieces I have seen them play before. 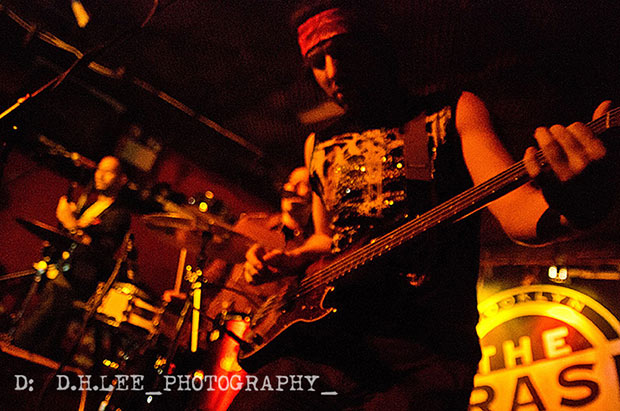 Was unable to grace myself to catch the full set of New Madrid for the sake of making a final bus, but was able to hear enough to enjoy a show that had a music that had a psychedelic/metal tone to it with a sonorous set of vocals to it that felt appropriately Latino.  Drummer/vocalist/keyboardist Axel Ito lent a very stylish flair to the entire experience as though he was performing a dance with the drum itself as he sang.  Quite a change when you compare video from their 2008 days.

-Asobi Seksu (QRO live review) @ Brooklyn Bowl, 10:30 PM – 11:30 PM.  Somehow, I’m always missing Asobi Seksu – they had a show cancelled by snowstorm-prevented headliner White Lies (QRO spotlight on) from making it into NYC, and this time they were up against MiniBoone…

-Freshkills (QRO live review) @ The Spare Room at The Gutter, 11:30 PM – 12:30 AM.  Should have checked out Freshkills at the Whatever Blog showcase.