Just as Northside began, the festival announced that they would be holding performances at The Jameson Lounge.  Set up at Good Co., The Jameson Lounge had previously been exclusively for artists and presenters, but the festival decided to have Northside performers do extra acoustic sets in the early evening, and open it up for press.  Free drinks + being able to catch acts otherwise would miss = there.

Attempted to visit McCarran Park’s highlight shows to hopefully catch Beach Fossils and The Thermals, only to find everything going on in the park except for a concert.  Half an hour of wandering later, gave up and headed to Legion.

The first set at Jameson Lounge was very acoustic, just Laura Stevenson (of Laura Stevenson & The Cans) sitting playing an acoustic guitar.  She started on the stage, before moving up closer to the tables and chairs, but still had to deal with airplanes flying overhead, like old Shea.  Still, some pretty music – no reason she couldn’t be the next Sharon Van Etten (QRO album review). 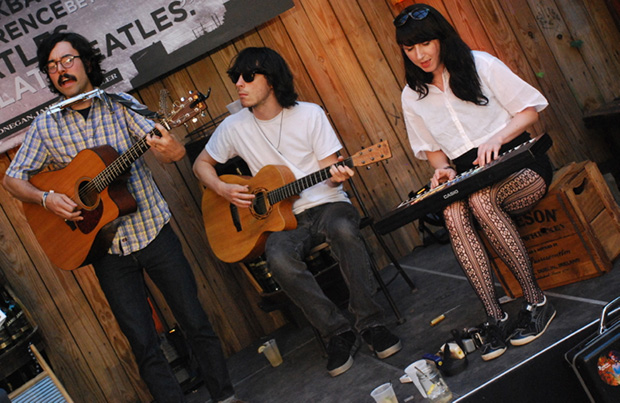 Click here for photos of backwords at SXSW 2012 in Austin, TX in the QRO Concert Photo Gallery

Click here for photos of backwords at Bushwick Walkabout in Brooklyn, NY on July 16th, 2011 in the QRO Concert Photo Gallery

backwords brought their full ensemble, though the drummer was reduced to just one snare drum in the acoustic-ness.  This all turned their set from their usual psych into more of a sweetness.

After backwords, an authentic Irish cooper explained everything that goes into a barrel of whiskey, for an interesting, but extended talk.  It did kind of screw over Life Sized Maps, who played solo & acoustic like Laura Stevenson, but many didn’t notice because they were resuming conversations that had been halted by the cooper. 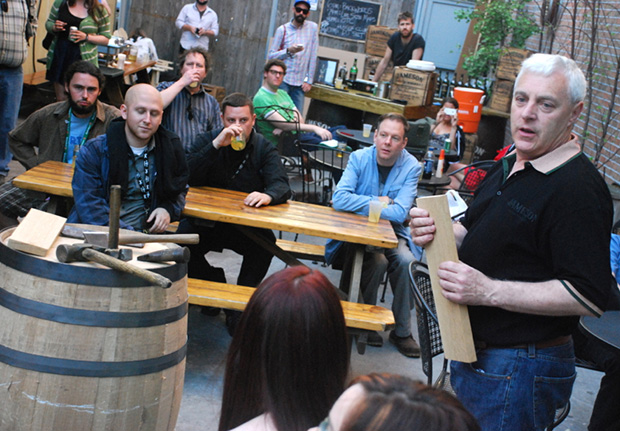 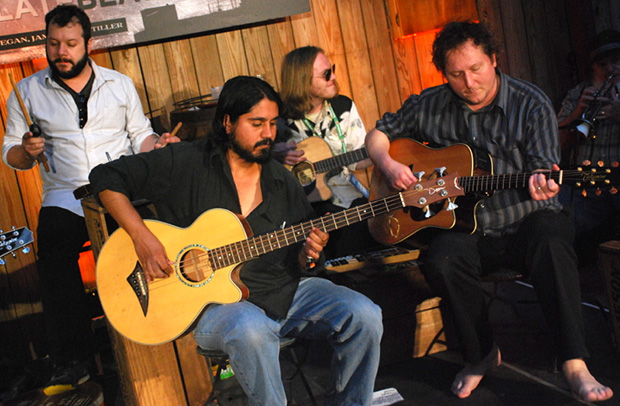 The ‘special guest’, even the busboy was surprised that this member of the Elephant Six Collective actually played.  Olivia Tremor Control‘s alt-backwoods did work in the setting, even if there was no Jeff Mangum (QRO live review) sighting like at their official show the next night.

Came to Legion right on time.  Right on time for a soundcheck.  Thirty minutes early again.  Had to miss LUFF on the set, which was is still regretted since they would be AWOL from performing for some time after this. 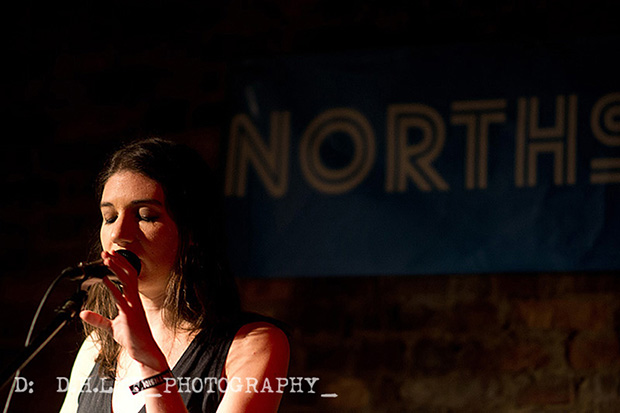 Click here for photos of Alyson Greenfield at CMJ 2011 in New York, NY in the QRO Concert Photo Gallery

Click here for photos of Alyson Greenfield at Tinderbox Festival in Brooklyn, NY on September 10th, 2011 in the QRO Concert Photo Gallery

Multi instrumentalist Alyson Greenfield started the lineup with a few anecdotes mingled with songs invented with many tools, including a drum, a glockenspiel, a synth, and a stubborn Omnichord.  Backups to her performance included a violinist, a cellist, and a drummer from the crowd who volunteered for her set.

Classic garage pop punk from Brooklyn in Crazy Pills.  Very old school, almost lo-fi in nature with a very perky attitude to match their dance-friendly beats.  Music included a song about taco trucks.  Crowd ate it up; how couldn’t they? 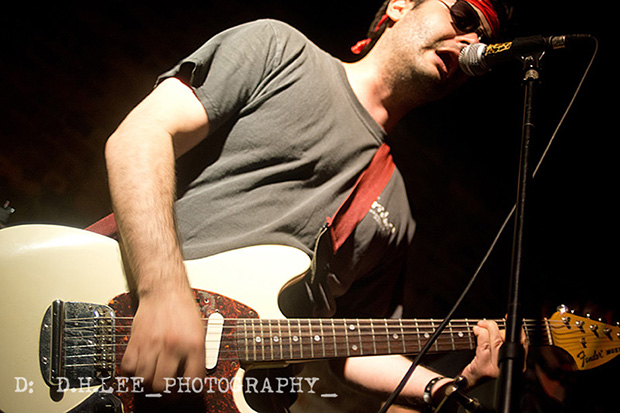 Not to be confused with the band from the U.K., this Planes was another high-energy garage group that kept the same intensity as Crazy Pills but offered with a jangle pop slant in their set list.  Still old school, still fun. 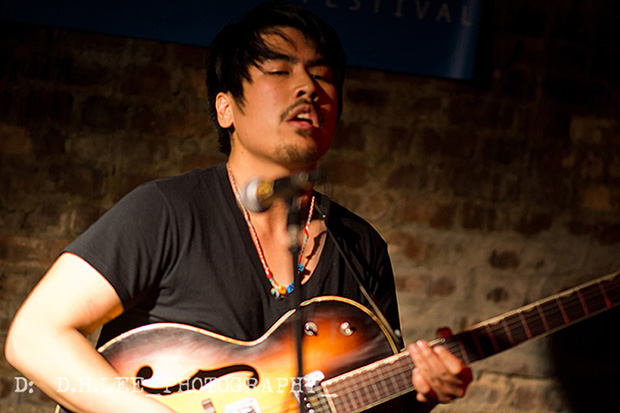 Taking a quarter of the Legion’s back room, the audience was still willing to put up with standing room only to catch their sound, With a bragging record for two shows this festival, Gold Streets‘ sound is hard and harmonic.  Something of a ‘90s alt-rock punk sound and emo; drummer has a crooning voice that takes me back to the days of Caitlin De Marrais’ Rainer Maria with just as much of the intensity when you catch them live.  Kudos to The Whatever Blog for setting up a lineup that was entertaining and complemented each other well end to end, even if I had to miss the tail end. 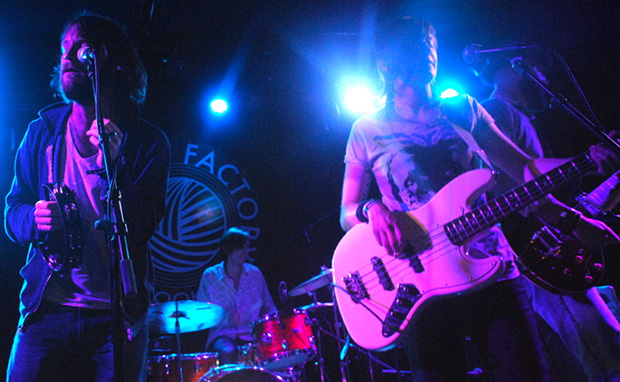 Photos of These United States at The Bluebird in Bloomington, IN on May 24th, 2012

Photos of These United States at Webster Hall in New York, NY on April 17th, 2012

Photos of These United States at Northside 2010

Photos of These United States at SXSW 2010 in Austin, TX

QRO’s review of These United States at Mercury Lounge in New York, NY on November 20th, 2009

Photos of These United States at CMJ 2009 in New York, NY

Photos of These United States at Prospect Park Bandshell in Brooklyn, NY on June 27th, 2009

Photos of These United States at Cake Shop in New York, NY on April 10th, 2008

I went to Brooklyn Bowl for The Felice Brothers – but not only was the opener playing, but it was the first opener.  James Felice (QRO interview) recognized me (despite that that interview had been years ago, and was a phoner…), and told me that they were playing at 11:00 PM, not 9:00 PM like on the Northside schedule.

So headed over for the second of many Northside acts I wanted to see that seemed to all be scheduled at the same time, These United States.  It was an album release party for their new self-titled album (QRO review), but the group still played some fun older songs, as well as the title track from the prior What Lasts (QRO review). 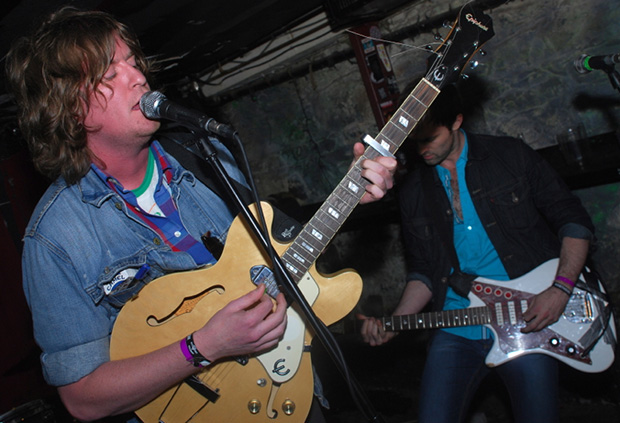 In the run-up to Northside, I had had a long e-mail interchange with the frontman for The Dunnie Bobos, so pretty much had to check them out – racing from T.U.S., as they were another band scheduled to overlap on Friday night that I wanted to see, but I made it there just before they began.

The ‘venue’ at The Charleston is just a very dingy basement – it makes Cake Shop (QRO venue review) look classy.  But The Dunnie Bobos’ garage-party works in such a place.  They were also a little tougher than your usual garage outfit (and there are a lot of your usual garage outfits in Brooklyn…), more imposing, but perhaps that was just because they looked so big in such a small place.

-The Felice Brothers (QRO spotlight on) @ Brooklyn Bowl (QRO venue review), 11:00 PM – 12:00 AM.  Immediately after The Dunnie Bobos finished, I realized I had lost something and spent the rest of the evening searching for it, to no avail – and thus missed the brothers Felice.  Sorry, James…