It was a big final day at NOS Primavera Sound in Oporto.... 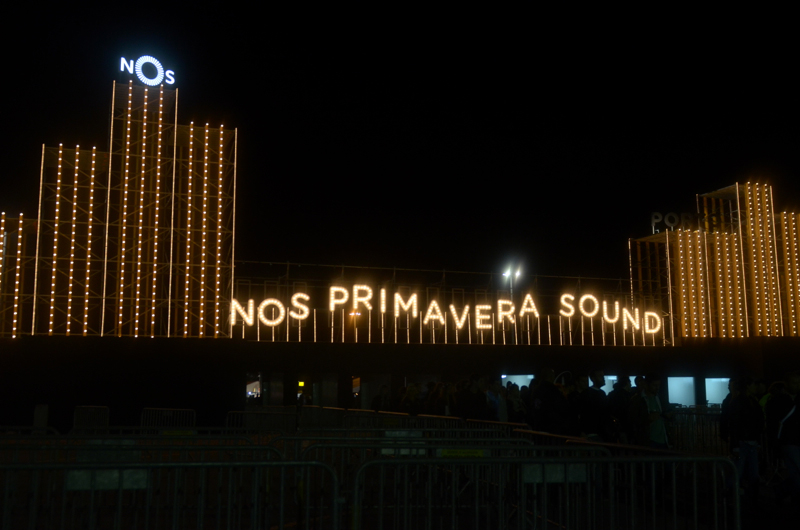 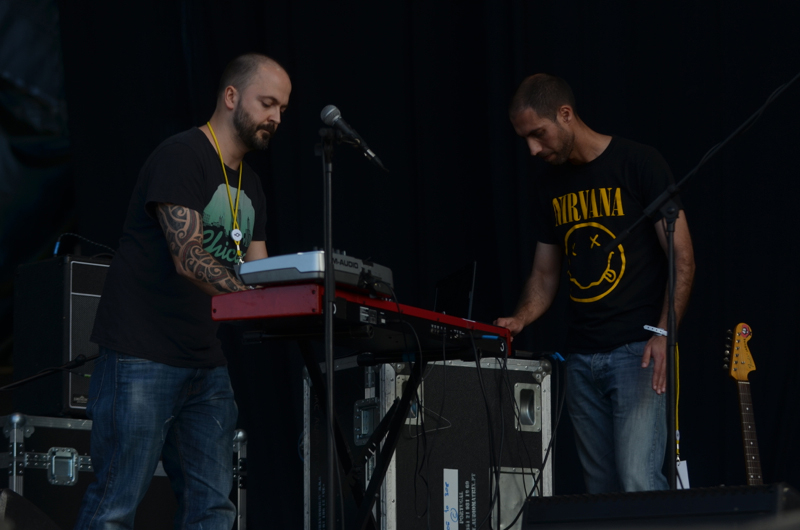 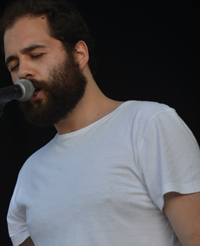 Portuguese band You Can’t Win, Charlie Brown opened the main stage at 17h55, making it an endurance challenge for festivalgoers, who were supposed to stay up until late at night to check on their favorite bands or get to know new ones, until almost 4 am.

One of the most interesting Portuguese bands, on stage they show they truly deserve the fans admiration they’ve been having so far. Presenting the album Diffraction/Refraction, new songs like “Shout”, “After December” and the hit single “Be My World” made fans happy, but also older ones like “Chromatic” and “Over the Sun, Under the Water”, remembering everyone that there was a life before their new release.

Somewhere between happiness and melancholic songs, the melodic details travelled in and out from smoothness to epic force. The perfect soundtrack to another daylight ending and perfect sunset among the misty seaside cotton candy clouded sky. “Heroin”, by The Velvet Underground, called many ears to the band as they ended the performance into an irresistible dance to some. 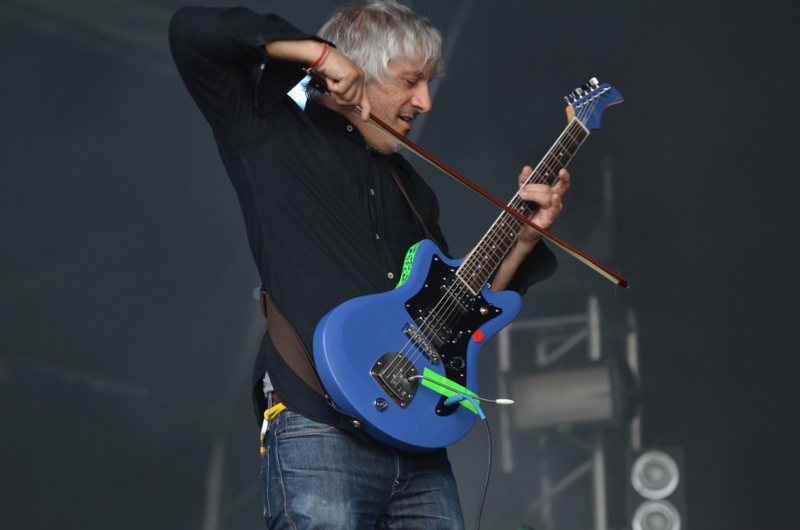 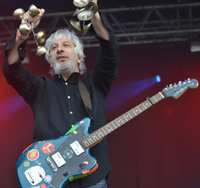 At Super Bock stage, right next to us, former Sonic Youth guitarist Lee Ranaldo brought Dust and latest album, Last Night On Earth, to the frontline. Ironically waving the photographers goodbye, Ranaldo gave us the guitar, star of the show apparently in an explicit flirt with the drums all the way up “The Rising Tide”, “Last Night On Earth”, or “Blacked Out”.

With no high expectations, he ended the performance in a crescendo, making sure this was the peak and closing in a grand finale.

Neutral Milk Hotel, on a great comeback after being absent for 14 years, hate pictures and don’t want anything to do with them. On his first words to the audience, singer and frontman Jeff Mangum pleaded everyone to turn off their cameras and iPhones, and on either side of the main stage both giant screens had been switched off also. No photographers on the pit. Just the band, the audience and, as Mangum himself claimed, the experience was going to be “from here” pointing to his own heart “to there” pointing to the crowd.

Their folk indie-rock filled with bells and jigs was raised some lullabies up in the air as the most devoted fans sang to their favorite tunes, sending some chills up our spines on “King of Carrot Flowers”, “Oh Comely” or “Two Headed Boy”.

Celebration, almost religiously devotional. Afternoon dusk and songs pointing towards the most shinning light so far. For some, this was the NOS primavera Sound ultimate experience, the top show of the whole festival. 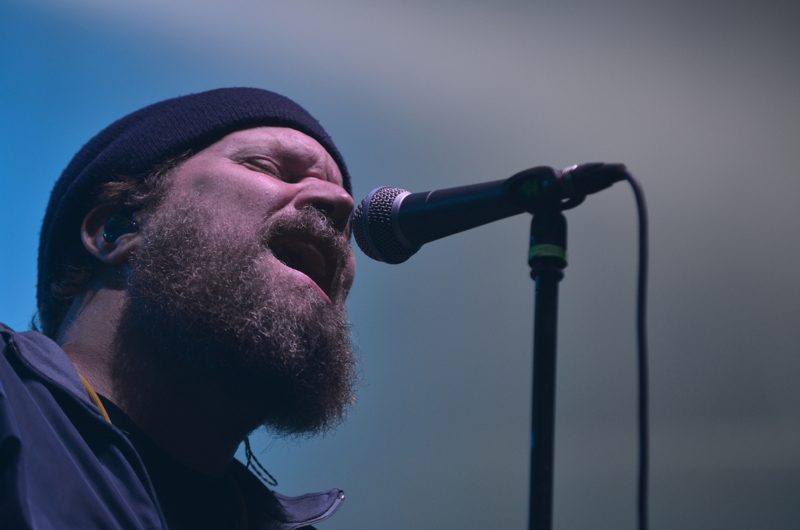 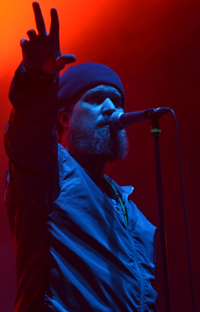 Short trip to the neighbor stage and we meet John Grant, who made us very happy at the Vodafone Mexefest last year in Lisboa.

Wherever you meet him, there is always a sense of encountering a long-time, no-see friend. The kind of friend that travels a lot, gets into trouble and his love life accidently gets into a mess. But the best part is that the same friend always ends up running into your shoulders crying over a lost love or a newfound disillusionment in life.

“Pale Green Ghosts” was quite danceable, though, and among the melodic and melancholic songs, we also find remixes and great catchy tunes to shake your hip to. “It Doesn’t Matter To Him” showed evidently the power of this amazing voice, and with that same warm tone in which he sang “Greatest Motherfucker”, also talked about the amazing “azulejos,” the Portuguese typical tiles in blue and white shades, which cover some of the ancient buildings and wonderful churches of Porto. At the end, “Queen of Denmark” stayed somewhere between the restrain and anger explosion, closing yet another chapter on our certainty when we claim that darkness is way more beautiful on John Grant’s own words. 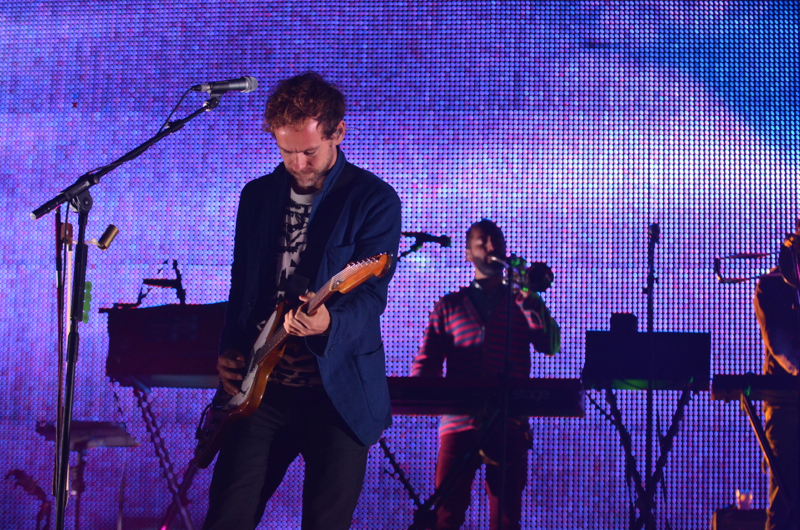 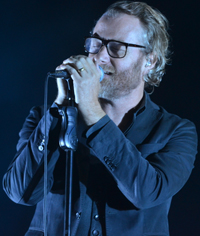 The National have been visiting Portugal a lot more than any other band we’ve seen recently (QRO photos previously in Oporto). They have grown accustomed to our wine, our food and our always sunny cities and beaches. The thing was, at NOS Primavera Sound’s last day, the crowd was so anxious to see them that probably one would assume they had never performed here before.

Matt Berninger and friends fired up “Don’t Swallow the Cap”, “I Could Live in Salt” without warning and when they got to “Sorrow”, Annie Clark, a.k.a. St. Vincent (see below) was called on stage to help sing the chorus with Berninger so perfectly, we could believe the song was cut made for them to sing it in a duet.

The energy between the crowd and the band made everyone forget the not-so-warming audience on their last performance in Portugal.

“Conversation 16” brought everyone’s voice to an impossible pitch, as they cried out, “Cause I’m evil” and ended the possibility to be having a regular conversation with anyone on the next day (whether 16 or not). The chaos and strain caused by a microphone chord rolled up by Berninger on his closest fans legs, as he entered the crowd in “Mr. November”, left everybody wild and desperate to get a hand on the lead singer, whatever the consequences may be on their own and Berninger’s safety.

It was sharing, pure and simple. Wild, screaming with fury. We were passionately embracing the destiny of being a grown man, sometimes entrapped in the body of a rock star with a warm soul, seasoned on soft red wine.

The detailed description of a “television version of a person with a broken heart”. We should all live in salt for leaving them behind. Yet again. 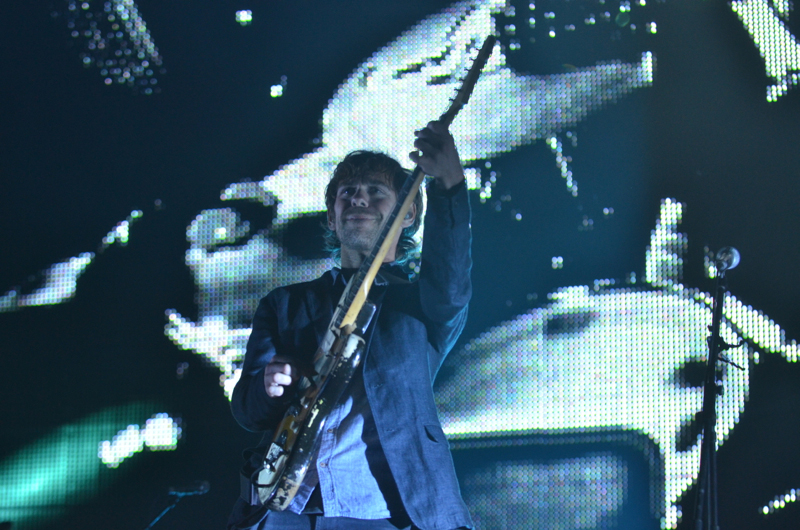 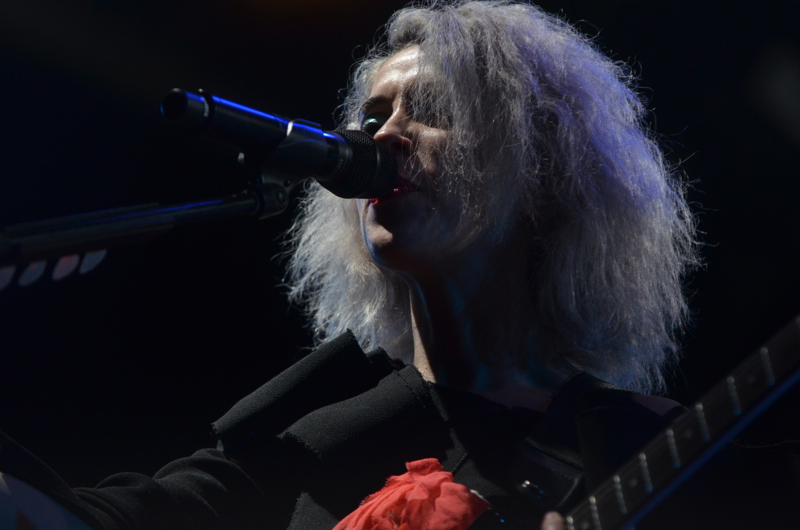 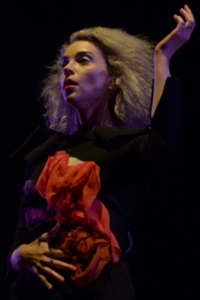 St. Vincent, or Annie Clark’s (QRO interview) claim on “where poetry goes to die,” went on stage again, now alone, after enjoying a bit of The National’s spotlight a few minutes before.

She made her appearance and probably stated for the most powerful female presence at the festival. She was singular, robotic, sensual, girlish, revolutionary, protester, lover all in one.

Starting with “Digital Witness” from her new self-titled album (QRO review), and “Cruel”, from Strange Mercy (QRO review), were captivating, before the singer started on a story about the things she has in common with the Portuguese crowd, which includes kangaroos, their love for The National, and on how they fail to fly although they both have wings. In “Surgeon”, Clark climbed up to a small podium, looking superior like.

“Cheerleader” and the clock was ticking. An hour has past and soon St. Vincent’s colorful world was coming to an end. 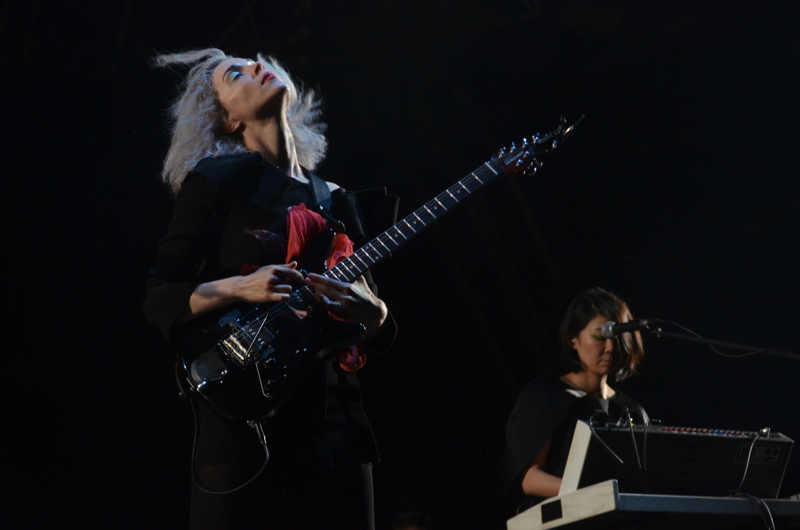 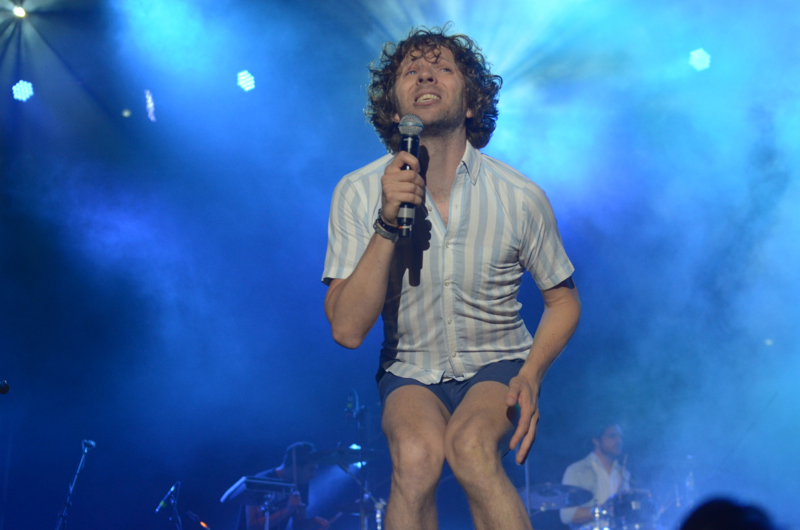 At the Super Bock stage there was still time for a major party, led by !!!’s lead singer Nick Offer, in shorts and rendering some funk as he saved his microphone for later inside those shorts, quite warmingly. 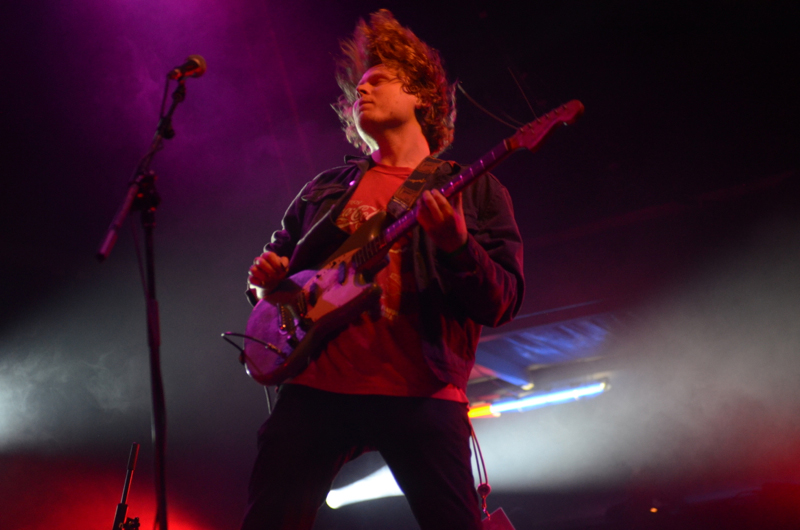 ATP Stage still had time for Ty Segall, who celebrated his 27th birthday. Expectations were high, and Segall confirmed every single one of them. Punk velocity, smashing rhythm, at every second being struck by a thunderstorm of guitars and on “Tall Man, Skinny Lady”, we could hardly take a break to breath. 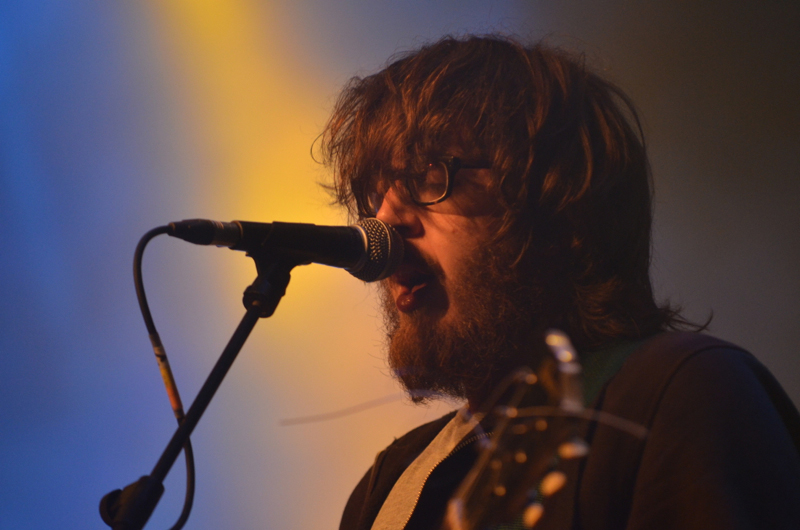 Running against time and low on energy already, we got to Cloud Nothings at Pitchfork Stage.

Same atmosphere as in Segall, except for an irritated Dylan Baldi almost striking a security guard on grounds that he treated the crowdsurfing fans as animals.