Not So Silent Night

The very extended Wainwright-McGarrigle-Roche-and more clan got together, either virtually or literally, for their ‘No So Silent Night’ special.... 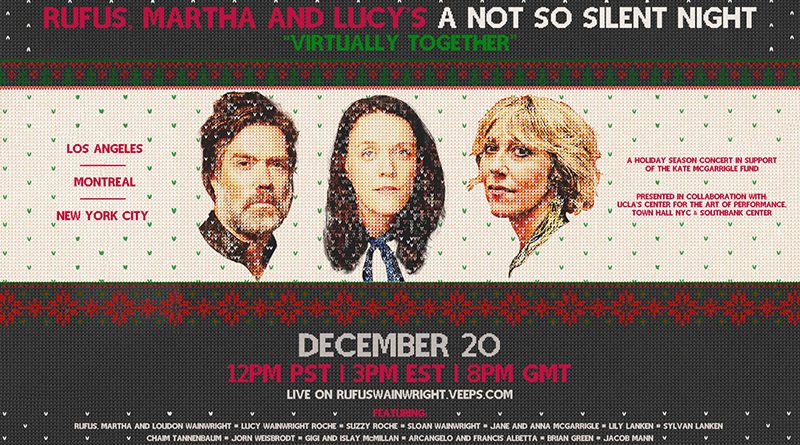 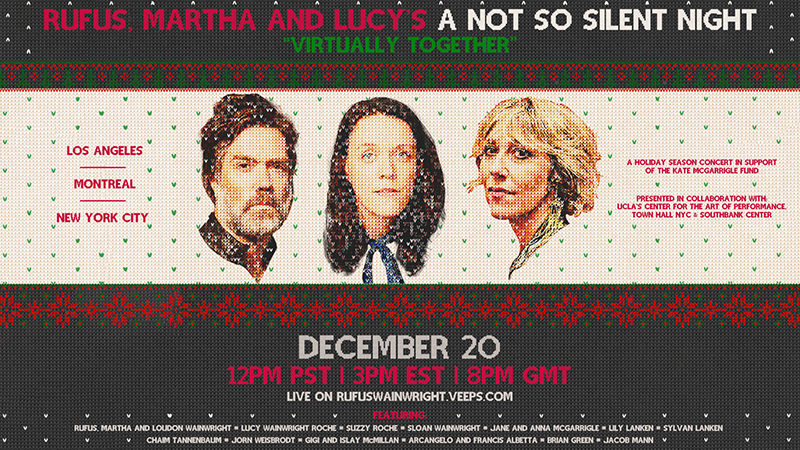 In the States at least, nobody tours in December, wedged between Thanksgiving & Christmas in that weird way which meant you only had like three weeks of school between holiday breaks. The only good shows were holiday events, from charity fundraisers to Christmas parties. Well, 2020 has cancelled all live shows, but some holiday concerts have persevered. Dolly Parton & Cyndi Lauper had their star-studded holiday livestreams, because of course they would (gotta make sure they get the vaccine – Dolly paid for it!…). Yo La Tengo managed to put on one of their Hanukkah shows (QRO live review). And the very extended Wainwright-McGarrigle-Roche-and more clan got together, either virtually or literally, for their ‘No So Silent Night’ special on Sunday, December 20th.

Siblings Rufus Wainwright, Martha Wainwright, Lucy Wainwright Roche, their dad Loudon Wainwright III, and more have been doing ‘Not So Silent Night’ for ten years, in honor of Rufus & Martha’s mother Kate McGarrigle and the Stand Up To Cancer Kate McGarrigle Fund to combat sarcoma cancer, which ended Kate’s life in 2010. It had long been organized by Aunt Teddy Wainwright, who might have been the only one in the family not to be a musician, but rather managed musicians (including Martha). Tragically, Aunt Teddy passed away in September, but the show went on, dedicated to her.

And it was an impressive show. The livestream pulled from: Rufus’ home in Los Angeles, including his husband Jörn, daughter Viva, two of Viva’s second cousins through Rufus, Gigi and Ayla, and Rufus’ band; Martha, her kids, extended family, and more in Montreal (in what appeared to be a barn, as they were all dressed warmly); Lucy “from my apartment in Brooklyn;” Lucy’s mother Suzzy Roche in Manhattan, aunt Sloan Wainwright in upstate New York, Loudon “from an undisclosed location on Long Island;” and more.

[note: your correspondent could not keep up with everyone’s names, how everyone was related to everyone, etc. Apologies, but there was like thirty people who appeared…]

The livestream bounced between locations & screens multiple times, and did it quite well (admittedly, it wasn’t live, though one doubts there were many do-overs). If you were a fan of any one of the artists, you got to see them, but also got just enough of the others to become fans of theirs as well. It did pull up some contrasts, like Rufus & Martha singing with their kids & family, but Lucy alone in a small apartment [your correspondent wrote this from his own NYC apartment], and Loudon out there somewhere dressed like Santa.

It was a truly holiday special, focusing almost entirely on traditional Christmas songs. The one wrinkle was that many of the songs were in French, and not just Martha-in-Montreal’s (the whole family is originally from there), though she had the most. Indeed, there was one point where her & many others up there did Christmas songs they were forced to learn in school as kids, but aren’t taught anymore, “because [the songs are] too religious.” She also did the likes of “Little Drummer Boy” and “Jingle Bells” in French, and it was neat that even a monolingual Anglophone Yank totally knew it. Rufus also did “Holy Night” in French, while Jörn and Viva did Jörn’s favorite holiday song, “O Tannenbaum”, in German, because Viva’s German is “excellent” and Rufus’, not so much…

And while the kids all had their moments, nine-year-old Viva was the definite diva star. She seemed to interject whenever she could, whether noting that her dad would still get upset like a kid if he didn’t get enough presents, to surprise wearing her father’s hat from the “Devils and Angels” video at one point. She also got her dad to add in WHAM’s “Last Christmas” – but Gigi and Ayla got to take the Judy Garland & Barbara Streisand parts in the “Happy Days Are Here Again”/”Get Happy” medley.

Garland had another appearance when Rufus did “Have Yourself a Merry Christmas”. Rufus has long been a Garland fan, including making an entire Garland concert album from Carnegie Hall that was nominated for the 2009 Best Traditional Pop Vocal Album Grammy. Ironically as Rufus noted, he had then sung “Have Yourself” with Renee Zellweger – who is now up against Rufus in next year’s Traditional Pop Vocal Album, him for the excellent Unfollow the Rules (QRO review), her for the soundtrack Judy…

Other highlights included Loudon doing “I Saw Mommy Kissing Santa Claus”, Martha’s “I’ll be Home For Christmas”, Lucy, Sloan, and Suzzy  performing “Silver Bells” from three separate locations (particularly great screen effects on that one), and everyone joining in on “First Day of Christmas”. And there was a touching tribute to Aunt Teddy, the selfless actor behind it all, as well as explanations from the doctors who’ve received research grants from the fund about what they’re working on.

After the event was a bonus “Fireside Chat”, like Rufus’ regular Friday livestreams (QRO live review), this time with Rufus, Martha, and Lucy – with questions from the chat read by Viva, all managed by Jörn (once again). They talked about their last show with Kate McGarrigle, and non-musical careers the musical family tried, like Martha as an accountant (turns out she was really bad at it), Lucy as a teacher (before her first time going on tour with Rufus), and a young, drunken Rufus thinking he would have been a great ballet dancer. Lucy noted that she probably sees her half-siblings more now than ever, thanks to music. Yes, the idea of their own kids becoming their own musical generation came up (to Viva’s delight), but also now getting to see each other’s kids for the first time in a long time. There was a readout of the names all the people who donated $250.00-plus (one person only listed an e-mail), before their kids & pets’ interruption brought it all to a close.

This is a holiday season like no other, separated and isolated while we wait for the COVID vaccine. So the perfect time for a ‘No So Silent Night’ like no other.