Nothing – Guilty of Everything

Somehow Dominic Palermo has been reborn through shoegaze as Nothing on debut full-length, Guilty of Everything.... 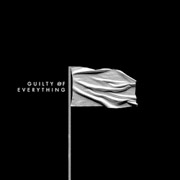 When Asobi Seksu (QRO live review) broke up last year, it seemed to signal the end of young bands trying to do shoegaze, a style that barely had a heyday.  And when Dominic Palermo of hardcore act Horror Show was sentenced to two years in jail following a stabbing, it seemed to signal the end of his music career.  Yet somehow Palermo has been reborn through shoegaze as Nothing on debut full-length, Guilty of Everything.

Miles away from any hardcore sound, Guilty of Everything fully embraces the lush expanse of shoegaze, humbler than epic post-rock but more atmospheric than indie-rock.  Like most shoegaze, it does lack in variety and becomes a little repetitive – even the variations, like the speedier “Bent Nail” or softer “Endlessly”, get repeated (also speedier “Get Well”, also softer “Beat Around the Bush”).  But as a debut in genre, Guilty works very well.

From reaching opener “Hymn to the Pillory” to the fitting titular closer, Guilty of Everything succeeds in what it sets out to do, and points towards more.