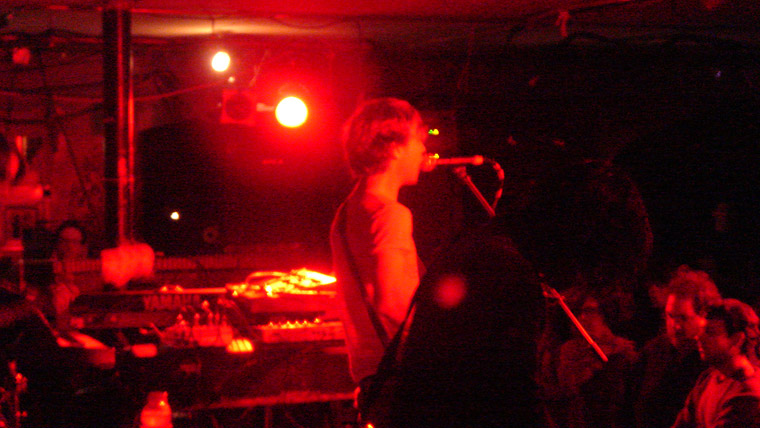 On a rainy Tuesday night, Now It's Overhead brought their ominous alt-jams to the Middle East in Cambridge, MA, and gave the crowd that was waiting for The Album Leaf something to get excited about.  Touring in support both the Leafsters and their new album, Dark Light Daybreak (QRO review), Andy LeMaster's fearsome foursome put a charge into the otherwise docile folk.   The band drew from each of its albums to put together a live set that's even more charged than their studio sound, and walked away with many more admirers.

On a tour that finishes up in their hometown, Athens, GA, Now It's Overhead was on the literal home stretch.  At this show, LeMaster still had enough energy to lose his breath several times, and the band seemed to get more out of their short time on stage than most do, making for a compelling 45 minutes.

The set gained strength as it went along, and for some reason, the lack of banter felt more like focus than shyness.   The strongest songs in the set were "Estranged" and "Walls", which are both catchy enough to be on a Fox TV soundtrack, but complex enough to escape most of that audience.  The band played each tune flawlessly despite equipment malfunctions and with an impressive array of mixing-on-the-fly.

Definitely a band not be overlooked, Now It's Overhead is certainly worth their own headlining role, and it was one of those times when the opener might've outshone the main act.  As of now, their next big tour plans take them through Europe for a while, so catch them while you can as they scoot down the East Coast.

The Rest : Atlantis, Oh Our Saviour