Obits : I Blame You

<img src="http://www.qromag.com/wp-content/uploads/2009/03/obitsiblameyou.jpg" alt=" " />Veterans Rick Froberg and Sohrab Habibion front Brooklyn’s Obits, but here, songs that chug along on one or two chords need some groove to back... 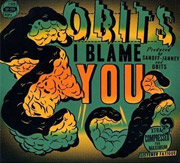 Songs that chug along on one or two chords need some groove to back them up, but the rhythm section falls short.  Greg Simpson’s a strong bass player with some good lines, but the mix doesn’t agree.  Drummer Scott Gursky is up to the groove task about half the time, playing simple, steady beats that are often too rigid.

Froberg and Habibion pay a lot of attention to interplay and dynamics.  Their guitar parts are mostly spare and distinguishable, cutting out often.  All the instruments in these tracks trade the spotlight quite a bit, which is odd considering how restrained everyone plays.  Except for a couple assertive guitar riffs, occasional flourishes by Simpson, and a searing cover of Kokomo Arnold’s “Milk Cow Blues”, I Blame You is a low-key record.  Accordingly, Froberg isn’t doing any Jehu-style howling here.  In fact, at his least abrasive, he sounds like a slightly rougher Scott McCaughey.  He sings well, but considering that he was one of the few good post-hardcore screamers, his exuberance is missed.

Since the playing is competent but unremarkable, the band lives and dies by the songwriting.  “Fake Kinkade” and “Two-Headed Coin”, early back-to-back, forgery-related numbers with good vocals from Froberg, are standouts.  “Two-Headed-Coin” is the only tune that puts Simpson up front and lets him drive the song, and all the other parts fare better for it.  A later pair are the most dynamic of the bunch: “Light Sweet Crude” ebbs and flows suspensefully until simmering down to a quiet end, and “Lillies in the Street”, pairs loud chugging verses with a catchy, more spacious chorus.

Are a few bland songs the only big problem with this record?  Maybe Geoff Sanoff and Eli Janney’s production is to blame: garage rock doesn’t usually get such a tight, sharp, separated treatment, and that might be the cause of its lifelessness.  The minute-long instrumental title track has a much rougher-sounding mix that maybe should have been applied to more than one song.

I Monster : A Dense Swarm of Ancient Stars