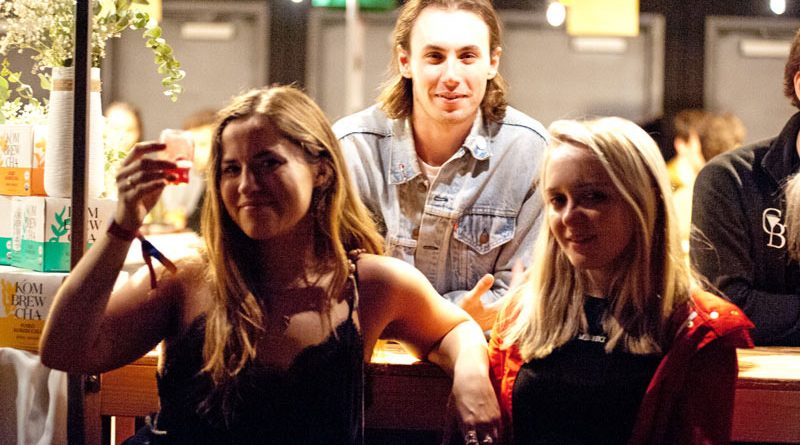 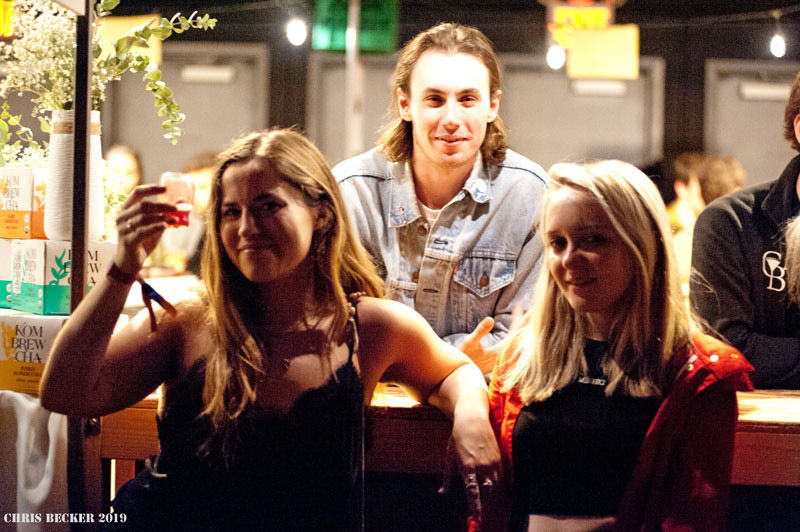 Two years ago, indie music website Pitchfork and beer website October teamed up to create Octfest, bringing some brews and some bands to Brooklyn (in September – QRO ’17 photos). Last year, Octfest was expanded to two days on Governors Island, with a line-up that ranged from Vince Staples to the Flaming Lips, and over fifty brewers, still in September, and a damp two days at that (QRO ’18 recap). This year, while only one day, a much more strictly indie-rock line-up, and ‘only’ forty-plus brewers, it was actually in October, on Saturday the 19th, at Knockdown Center.

First things first, the venue & date move was a good one. Yes, it was always weird to have ‘Octfest’ in September, and Knockdown Center is large enough to hold everything that was going on. Yes, the L train was running slow even for current construction (and it’s a hike from the stop to the Center), and it wasn’t warm out, but was still nice enough out to occasionally pop into the outside courtyard for a smoke or a seat. And there was more than enough beer, such that you didn’t need to come in hungover on a second day. 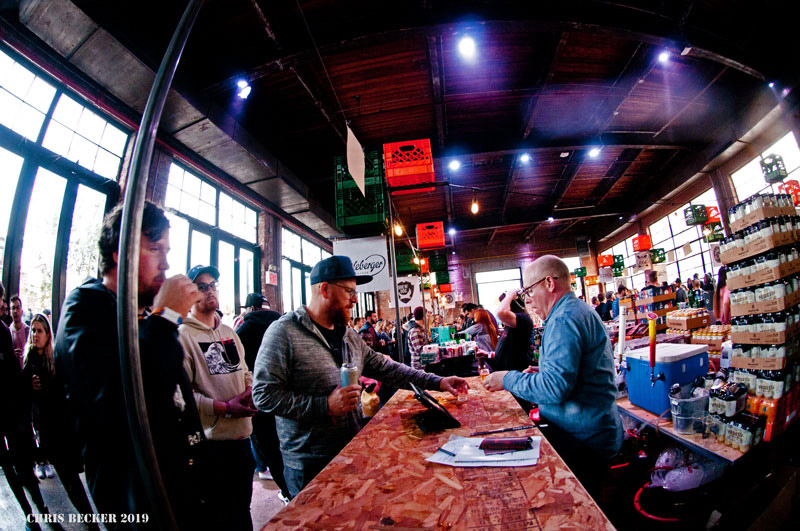 One was only given six free 3 oz. samples, but it was all done through an automated wristband synced to your credit card that could charge you two dollars per sample after that. Moreover, most stalls didn’t bother to charge you once you told them you were out of free samples (and you had to tell them, as it was a different screen on their devices to charge you). Hell, by the end of the night – and the beer stall closing was pushed back an hour to 9:00 PM – nobody cared, and some were even just giving out beers to clear the rest of their stock.

Your correspondent tried to sample every single one of the forty-two beers, and while he didn’t quite make that, he definitely made it past thirty (and somehow still made it home that night…). A few trends did pop up. There was the ‘Pumpkin Spice-ing’ of beers, as the famed style of Starbucks latte has inspired numerous breweries to push even more into the October spice field, such as Austin East Cider Spiced, Blue Point Mother Pumpkin, Willie’s Superbrew Pear & Cinnamon, Four Peaks Pumpkin Porter, and others. There were also a number of more fruit-flavored drinks, of varying quality that really just depend on one’s personal taste, like Wicked Weed Watermelon Dragon Fruit Burst, Willie’s Superbrew Sparkling Pomegranate & Acai, Golden Road Mango Cart, Narragansett Lemon Shandy, 10 Barrel Strawberry Crush, Nicaragua Brewing Company Panga Drops, Breckenridge Strawberry Sky, Radeberger Grapefruit, BrewDog Clockwork Tangerine, Stone Brewing Tropical Tangerine, and more. Meanwhile, the dominance of the IPAs, which for so long have been the definition of highbrow microbrew, seems to be passing, perhaps because the big breweries now do IPAs and they’ve lost their indie-cred (the most notable was the awesomely named Rogue Batsquatch). 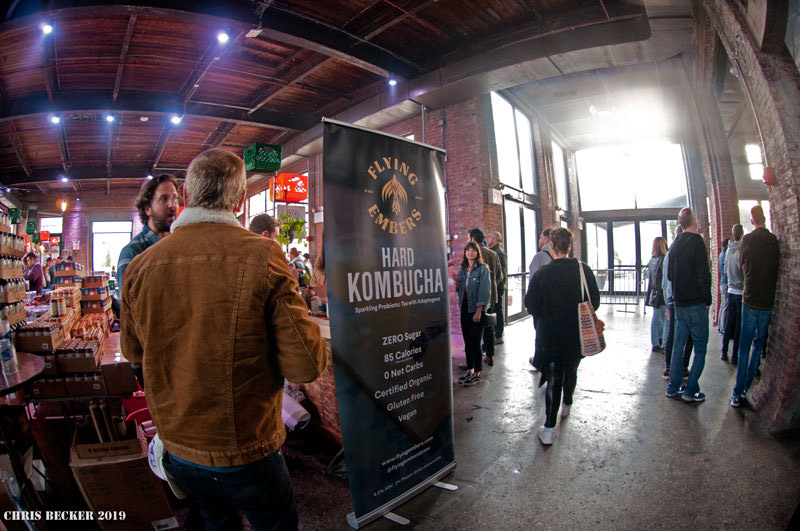 Also of note was the number of non-beer samples at the beer festival. Hard Kombucha is definitely a big wave, with the likes of Juneshine, Kom Brew Cha, and Flying Embers, which definitely made themselves known, but still might only be for select tastes in sizes larger than 3 oz. There was light sparkling wine Saturday Session, which fit in better than you’d expect, and the new ‘alcoholic sparkling water’ like Oskar Blues and Southern Tier that has divided critics (The Economist recently derided the trend), but had good attendance. 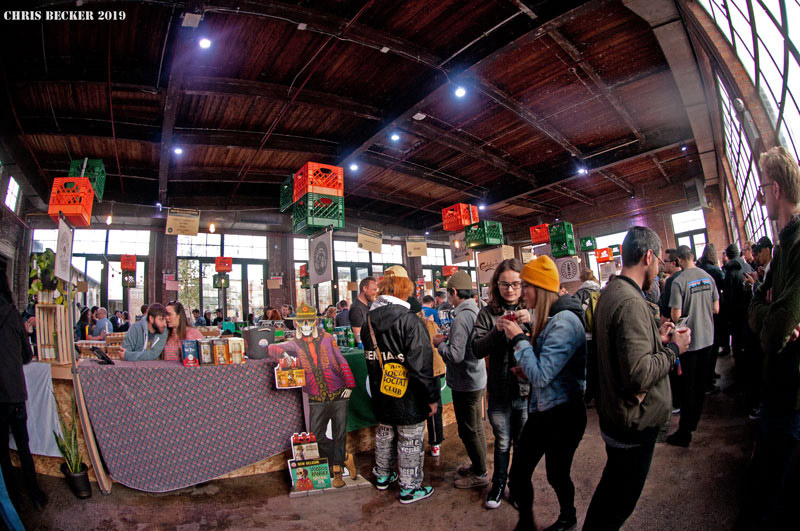 One great thing was that one never had to wait more than a few people/minutes to get a drink from one’s chosen booth, even with customers asking questions about the drinks. Perhaps it was because the stalls were all stuffed indoors, so no space to make long lines. That wasn’t the case with the only food seller, Mission Chinese, who were outside and had an enormous line, which only petered out when they were out of everything but spring rolls. 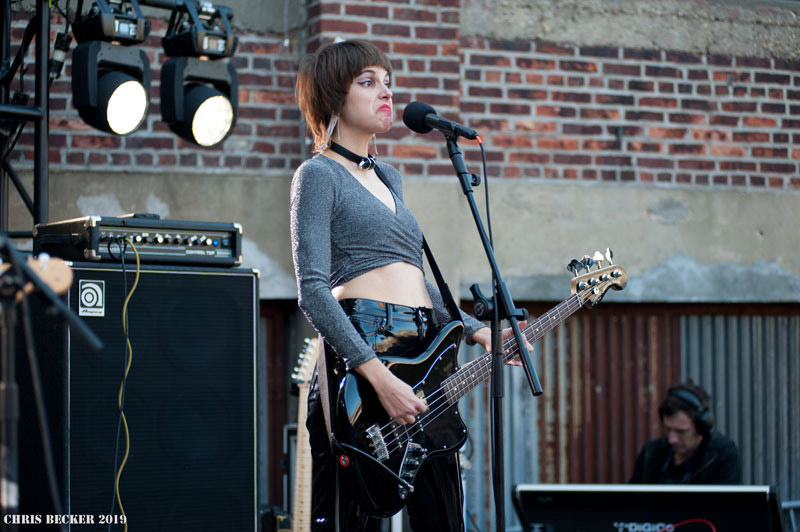 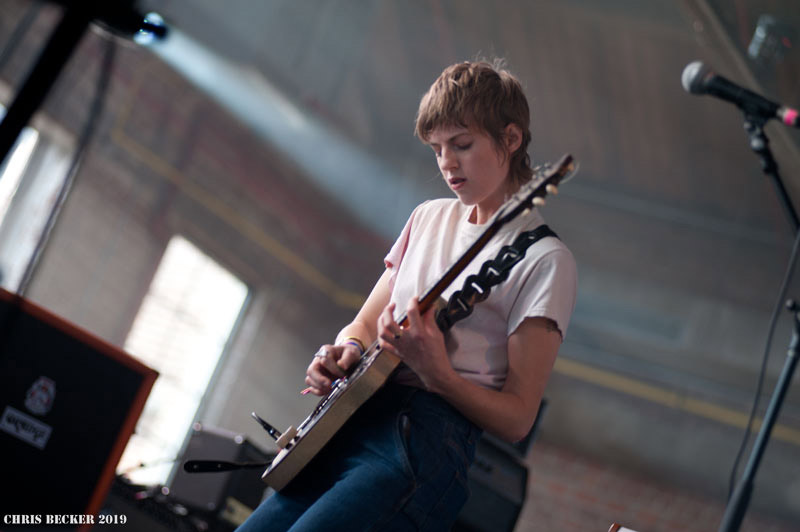 And yes, there was also music. The line-up leaned very white indie-rock, very Pitchfork, though the old guys at Pitchfork who still listen to white indie-rock (as opposed to the big-name hip-hop that has come to lead the Conde Nast publication). Control Top and Empath opened up the outdoor and indoor stages, respectively. The outdoor Sidecar Stage was a little complicated to get to, but one could watch from behind and indoors through windows for the likes of the glam Priests. METZ were very loud in the main hall, which might have drove away some drinkers, but brought in a strong crowd of their own. 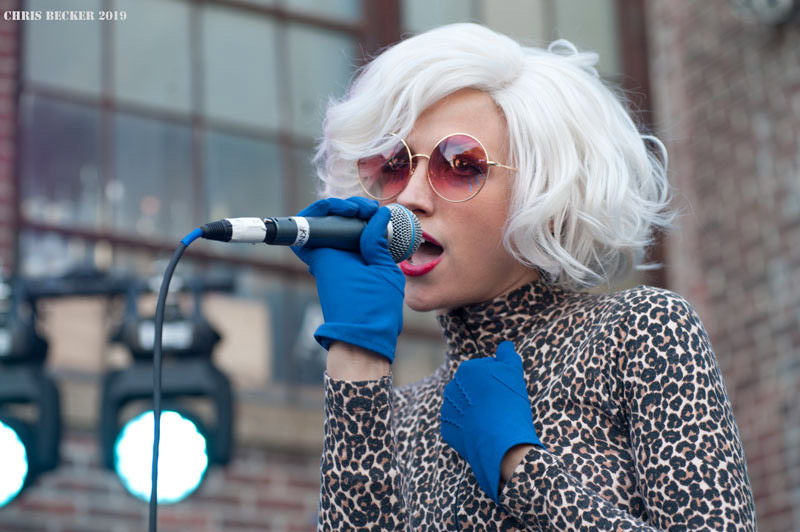 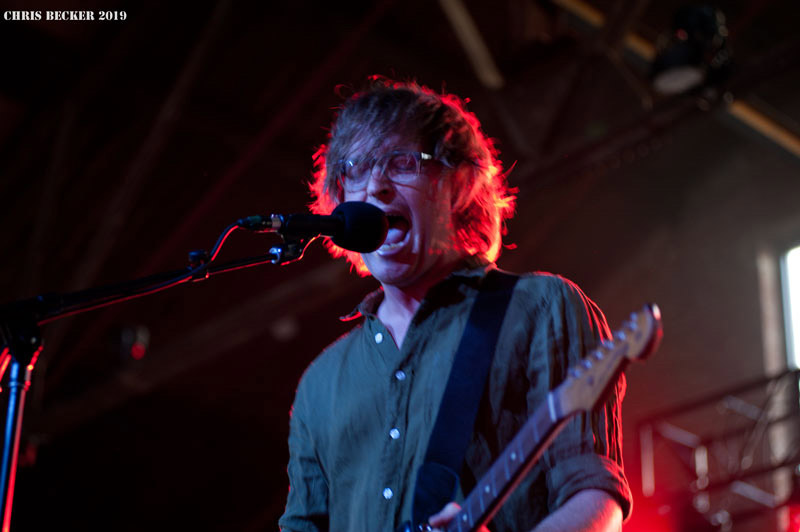 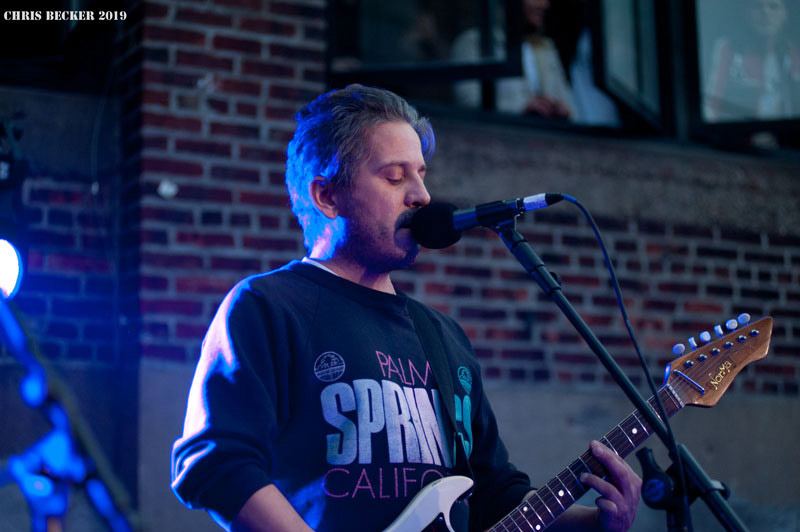 The reunited Duster (so old school they don’t seem to have social media) were airier and more expansive, while Iceage was nicely wild & hard, getting the crowd going as the festival moved to its (drunker) back half. 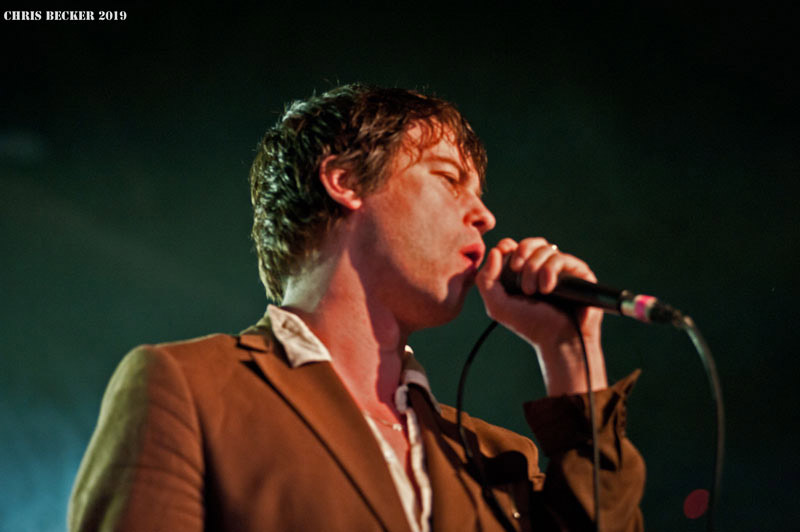 At first glance, it was unusual that legendary post-rock band Mogwai wasn’t headlining, but that was actually for the best, as it meant that drinking folks weren’t wasted when they went on, and the old folks who came for Mogwai didn’t have to pay the babysitter for a long night. Oh, and they were suitably epic, beyond run-of-the-mill hipster-dom. 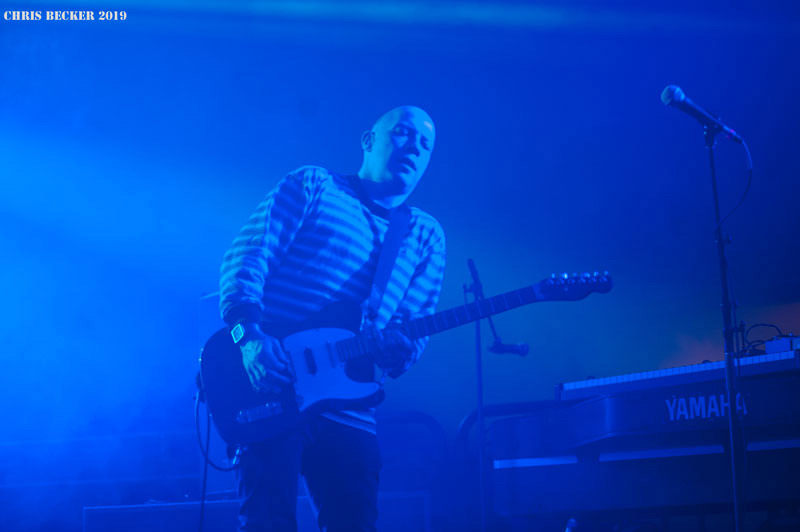 Closing out the Octfest were Screaming Females outdoors, doing just that, and fun times from Parquet Courts, a great act to close out a beer festival. 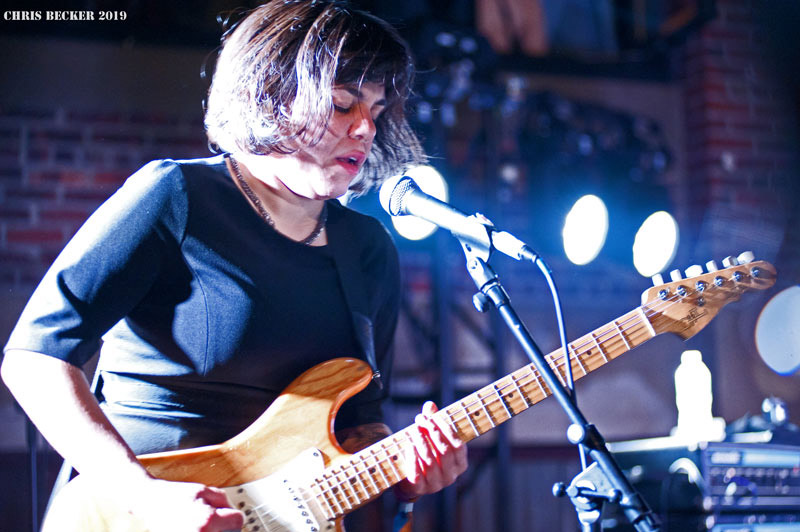 The whole thing ended at 10:00 PM, impressively early for a semi-indoor event, but for the best, as no one there by then needed to keep drinking (though those stumbling out by that point were a sight for those just starting their Saturday nights…). Indeed, many people saw their phones die, so long had they been at Octfest.

The beer + music festival is always going to be a slightly odd two-headed chimera, maybe not quite enough if you only like one, but more than enough of a great combo if you like both. 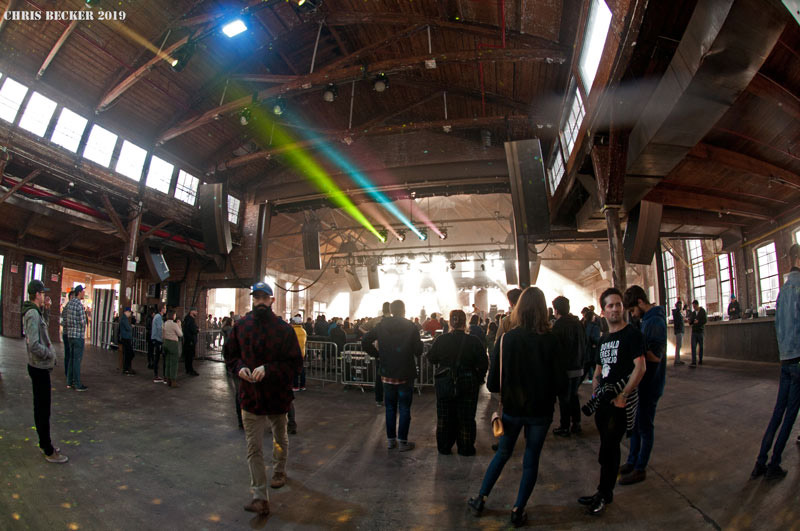 The New Pornographers – In the Morse Code of Brake Lights