<img src="http://www.qromag.com/wp-content/uploads/2012/10/oddfuturesep19.jpg" alt="Odd Future : Live" />If you've ever been to an underage hip-hop show, then you should be fairly familiar with what to expect from an Odd... 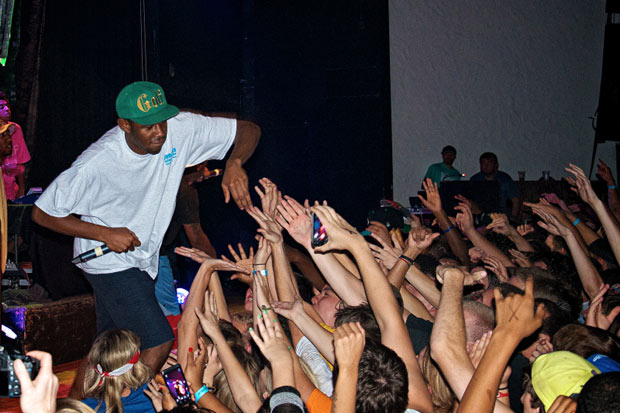 If you’ve ever been to an underage hip-hop show, then you should be fairly familiar with what to expect from an Odd Future show.  Teenagers and twenty-somethings with excess energy and snapbacks for miles.  There’s always the smattering of tween girls toting their fathers through the pits of fervor and elbows down in the pit.  It’s a strange sight to see a 40-something dad standing watch in the midst of a writhing sea of grinding, groping and grasping concertgoers.  They speckle the audience like islands of reason in a sea of purposeful lunacy.  And that’s really what the Camp Flog Gnaw turned out to be on a crisp Wednesday night, September 19th, at The Granada in Lawrence, Kansas.

First things first, OF sincerely does not give a single fuck.  Or at least that’s what we’re led to believe.  Yes, the music that Tyler, the Creator and his band of merry men produce ranges from rape, to kidnapping, to partying, and all the way back to rape and murder.  But it is not mindless.  “Yonkers” is a track that shows a real window into Tyler’s head.  Sure, he’s playing a character, but even a fabricated character communicates a piece of the creator, Tyler.  Instrumentally, the collective is more than adept.  Tyler himself is a fantastic producer, often pairing smooth production with blunt and terse lyrics, like Wu-Tang rapping on a Neptunes beat.  To say that all this vulgar rap and absurdist lyricism is nothing but youthful exuberance does a serious disservice to the Golf Wang.  Frank Ocean’s Channel Orange is already being touted as a possible album of the year candidate, and is at the very least the official debut of an immensely talented artist.

So yes, Golf Wang is at least in part an exercise in exaggeration, but at its core there seems to be a master plan, or at least a credo.  Which is why seeing them live and in living color left me nonplussed.  For all intents and purposes, the show seemed to be nothing more than that underage hip-hop show.

The cast for the night included Tyler, Hodgy Beats, Domo Genesis, Jasper, Taco, Left Brain, Mike G, and at least two other less famous members of the crew.  Perhaps most disappointingly, there was no Frank Ocean, busy promoting his album, and no Earl Sweatshirt, busy finishing his album.  No Frank meant that the R&B aspect would be completely absent, and without Earl’s calm plodding flow, there would be little to no self-control present on stage.  But we don’t go to hip-hop shows for self-control. 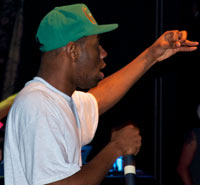 The group performed most of the hits, including “Yonkers” during which Tyler called out the crowd for treating the clearly mellow track as if it were a club banger.  But you could hardly blame the crowd for matching the feel of the entire rest of the show.  I stopped counting stage dives around number twenty, as the show really became Odd Future featuring whatever kid was currently being crammed up on the stage and immediately catapulted back onto the crowd by the bouncer.  It was nothing more than a typical, loud, hip-hop show.  The subtleties that make up such a vast section of the Odd Future catalogue were simply not there.  Most of the music they played was of the “Kill People, Burn Shit Fuck School” nature.  The darkly introspective tracks that often separate OF from the rest of the pack were completely absent.  The performers traded verses that would have been completely unintelligible to anyone not well versed in OF lyrics.  It was painfully clear that Camp Flog Gnaw is a tour where young artists are having as much fun as possible while being paid to smoke on stage, drink copiously, and yell at pre-teens who had to bring their dads to the show.

If that’s what you want from your Odd Future show, then Camp Flog Gnaw needs to be on your to-do list.  But if you’re hoping to see what exactly it is that makes these unusual kids from L.A. so special, and why the hip-hop world is so hooked, we may have to wait for the kids to tire of the tour party life.  Just remember, none of them care if you were disappointed or confused by their show, they do what they do – regardless of you, or your dad/chaperone. 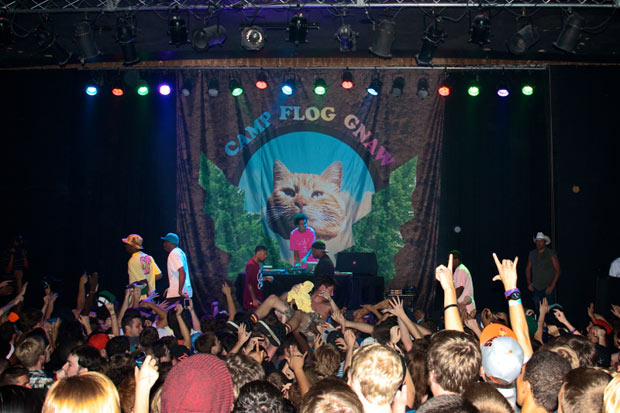