Of Monsters and Men Livestream

Of Monsters and Men are livestreaming their four shows from native Reykjavik this December.... 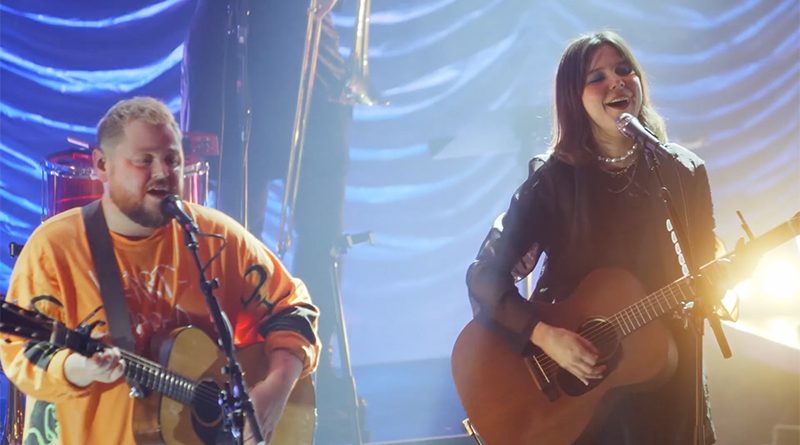 In what feels like forever ago, but was only a decade, Reykjavik’s Of Monsters and Men released their worldwide hit debut full-length, My Head Is an Animal (QRO review). Since then, they’ve played the likes of Radio City Music Hall (QRO photos), were namechecked by Family Guy, were praised by Craig Ferguson on his Late Late Show, and put out two more records, 2015’s Beneath the Skin (QRO review) and 2019’s Fever Dream (QRO review). Just as the pandemic was hitting early last year, they released killer single “Visitor” (QRO review), but obviously couldn’t leave their island of Iceland. But on November 9th through 12th, they played four special, intimate shows at the place where they started, where they played Animal’s release party back in 2011, Gamla Bíó. Of course, it was tough for the rest of the world to make it to the north Atlantic, so Of Monsters and Men are livestreaming all four performances this December, on the Wednesdays, December 1st, 8th, 15th, and 22nd, starting at the start of month, on livestream platform Mandolin.

As befits an act with an international fan base, there were actually four airings of the livestream on the 1st, at 9:00 PM at time zones GMT, EST, PST, and AEST, or for U.K./Europe, American East Coast, American West Coast, and Australia. But North America’s time zones are also South America’s, so the chat for the EST airing included people from Mexico, Brazil, Argentina and Chile. And chat thankfully wasn’t full of ‘This isn’t casting to my television’ or other technical complaints, as so often happens with livestreams.

Playing My Head Is an Animal in full meant starting with the “Hey!” of opener “Dirty Paws”, the collective’s collective shout of it having become their signature, thanks to its appearance in their breakthrough Head single “Little Talks”. Yet this wasn’t just the track listing you remembered, as the group threw in some early numbers that didn’t make Animal back then, some of which were recently featured on the tenth anniversary release. After the big open of “Dirty Paws” & “King and Lionheart” was the slow but brightening sound of non-album “Slow and Steady”, followed by another non-album piece, the bigger & brighter “Mountain Sound”, two strong pieces that shone as brightly as anything from the original release.

Of Monsters and Men playing at home meant they could bring all the bells & whistles, which was particularly close to fact at this show, as there were brass performers & more who added to the performance, such as the horns on “Numb Bears” or accordion on “From Finner”. Between songs, singers Ragnar Þórhallsson and Nanna Bryndís Hilmarsdóttir (QRO interview together) would thank the crowd & joke, both in Icelandic (shocking all the navel-gazing Americans in the chat) and English (because Icelanders are Canada-level polite), even translating the Icelandic remarks into English. Before “Sloom”, Þórhallsson asked for permission to “bring it down a bit, but not too much,” even saying fans could sit on the floor, “But I wouldn’t recommend it.”

And there were quiet, intimate moments, such as Hilmarsdóttir on “Love Love Love” (one person in chat said it was their wedding dance song), or both Þórhallsson & Hilmarsdóttir for the following “Sinking Man” (from the 2021 expanded reissue). But then it was back to the big with “Your Bones” and yes, “Little Talks”. Including songs not on the original release delayed “Little Talks” this night, but made it into something of a ‘surprise’ when it finally came, “Hey!”

After complimenting the crowd on their jumping ability on “Talks”, Hilmarsdóttir dedicated “Lakehouse” to the fan up front with a tattoo that said, “Lakehouse,” adding, “If you want to get a song dedicated to you, get a tattoo” – which is certainly going to cause all the fans with tattoos to try to push up front at subsequent shows. Then Hilmarsdóttir jumped on an extra floor tom for “Six Weeks” & “Yellow Light” to close out My Head Is an Animal.

Whenever an artist does an ‘album in full’ concert, there’s always the question about the encore, because they’re not leaving the stage until the record is done, but they still have to return, but with what? This night, Of Monsters and Men started with Hilmarsdóttir seated with a quiet one, “Because I know you’re all partied out,” another piece that didn’t make the debut album, that she wrote as an, “Emo sixteen-year-old,” “Phantom”. And the group got in two more recent songs, Beneath the Skin’s “Empire” and last year’s “Visitor” – it wasn’t quite the first time they’d played “Visitor” in front of a live crowd, but it was close.

Of Monsters and Men ended the evening with a group bow, but it wasn’t the end to the performances at Gamla Bíó, or of the livestreams, with three more coming up, or even this livestream, as there was a 24 hour rewatch window. You might not be going out this December, whether from Omicron or the cold, but can still catch Of Monsters and Men. Hey!