A new character in of Montreal’s cache of theatrical performers, a red caped, red masked guy dressed in red clothes, introduces the band on its latest tour.... 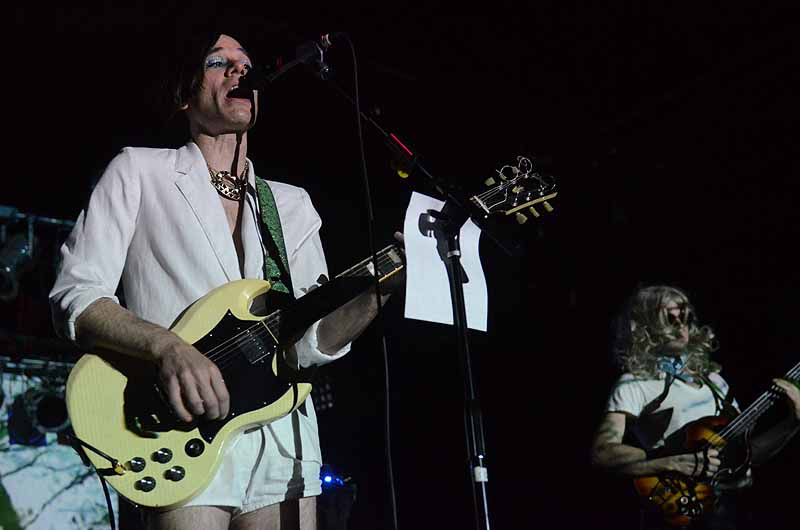 Photos of of Montreal at 2014 Austin Psych Fest in Austin, TX

Photos of of Montreal at 2014 Middle of the Map Fest in Kansas City, MO

Photos of of Montreal at Music Hall of Williamsburg in Brooklyn, NY on May 22nd, 2013

Photos of of Montreal at 2013 Savannah Stopover in Savannah, GA

Photos of of Montreal at Plaza Live in Orlando, FL on March 8th, 2012

Photos of of Montreal at 2011 Primavera Sound Festival in Barcelona, Spain

Photos of of Montreal at Firestone Live in Orlando, FL on January 13th, 2011

Photos of of Montreal at Highline Ballroom in New York, NY on January 26th, 2010

Photos of of Montreal at Santos Party House in New York, NY on September 16th, 2009

Photos of of Montreal at 2009 Norman Music Festival in Norman, OK

QRO’s review of of Montreal at Orpheum Theatre in Boston, MA on October 30th, 2008

QRO’s review of of Montreal at Avalon Ballroom in Boston, MA on March 11th, 2007

A new character in of Montreal’s cache of theatrical performers, a red caped, red masked guy dressed in red clothes, introduces the band on its latest tour. In the intro at the Masquerade in Atlanta on Thursday, May 14th, he told a story about Atlanta, giving good and bad points about it, then went on to a circus-barker like introduction of Kevin Barnes, of Montreal’s writer-singer-guitarist. On this night, the entire band, including Barnes, was dressed in white, except the keyboardist, who wore a red shirt, but was not the masked man. Perhaps for variety, 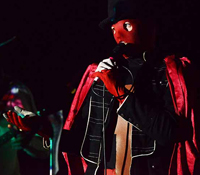 the lead guitarist wore a bleach blond wig. Throughout the entire performance, videos were played on top of the band, making it quite the psychedelic affair. The band played hit tracks such as “Suffer For Fashion”, “Gronlandic Edit”, and “Heimdalsgate Like a Promethean Curse”, while adding songs from new album Aureate Gloom (QRO review), “Lanc’s Theme,” “Chthonian Dirge for Uruk the Other” and the epic “Like Ashoka’s Inferno of Memory.” 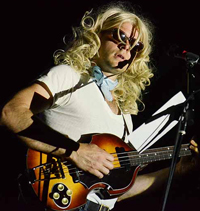 Glam and psychedelia were definitely the main them for of Montreal, with Barnes wearing makeup, looking like a character from the movie Velvet Goldmine and singing a lot like a tortured, high-pitched David Bowie or Prince, whining and adding vibrato over bouncy, dance-based music. He also did things like use various shaped paddles in layers to create different scenarios and looks around him. At one point, Barnes became a butterfly. The stage was his playground, and the performers who appeared behind the front row of the band (guitarists and bass guitar) dressed in outfits such as angels, poodles, babies, statues, chomping heads, or top-hat wearing men, moved paddles and blew confetti guns, keeping things interesting and new. The newly added effect of video playing over the band makes the performance even more varied, with different images being played on the paddles. He also played half the show in a white and blue pleated shirtdress while playing tambourine. 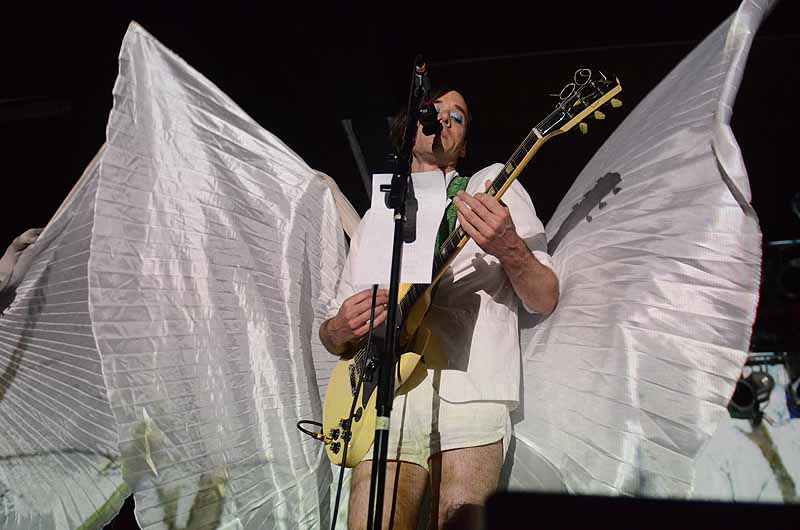